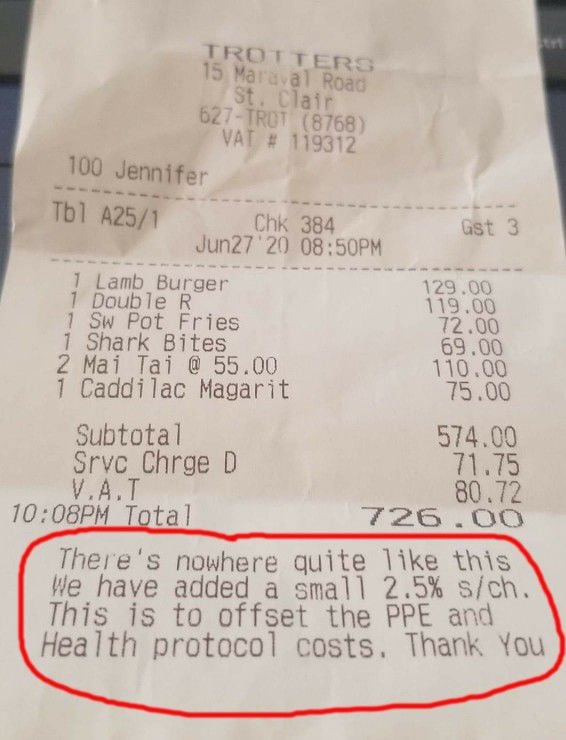 CAUSING OUTRAGE: The Trotters bill posted by a Facebook user. 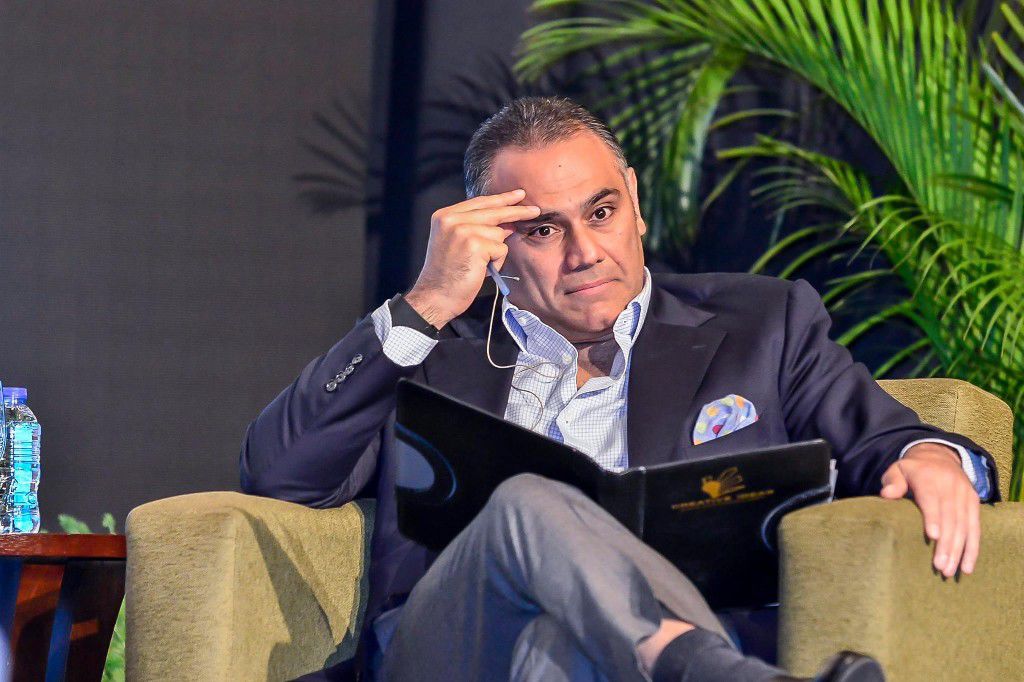 CAUSING OUTRAGE: The Trotters bill posted by a Facebook user.

The footnote on the bill was accidentally left.

This was the response of Trotters restaurant, Maraval Road, Port of Spain, after National Security Minister Stuart Young said he would look into the restaurant’s decision to add a 2.5 per cent service charge to offset personal protective equipment (PPE) and health protocol costs to customers’ bills.

The restaurant has since responded that the footnote accidentally remained on the bill.

Social media was abuzz between Sunday and yesterday after a Facebook user posted a bill from Trotters, questioning why the restaurant was charging 2.5 per cent to offset its PPE and health protocol costs.

Many people expressed outrage with the charge, saying the issue warranted attention from the Consumers Affairs Division.

At yesterday’s Health Ministry’s virtual Covid-19 news conference, Young said he will be looking into matter.

“This bill was brought to my attention Sunday night and then yesterday morning as well. I’ve been asked to take a look at it, with this charge that is being supplanted on the bill for PPE and Covid-19 protocols. That is something we are going to be looking at,” Young said.

The Express contacted restaurant owner Peter George who, when asked, was taken aback by Young’s comments, stating he has always conducted business in a transparent manner.

“The inference of looking into a business implies some illegal activity is taking place at the establishment, that is worrying. This was a discretionary service charge which was stated clearly on the bill and people are free to pay it or not. I would avail myself for discussions if the minister wants to speak with me.”

Last evening Trotters in a statement on social media said the 2.5 per cent charge accidentally remained on the bill when in-house dining reconvened last week Monday. The restaurant said, since October 2019, it has had a dine-in service charge of 12.5 per cent and during the Covid-19 lockdown period, and charged 2.5 per cent on curbside and deliveries in an effort to partially offset PPE and other costs of Covid-19.

“We explained this charge clearly as a footnote on our bills in the spirit of transparency. After the recommencement of dine-in, we had reverted to the 12.5 per cent service charge but the footnote accidentally remained and caused some confusion,” the release added.

Trotters further stated that it was surprised by the attacks on its team and management.

“There was no need for these attacks and calls for boycott, especially from commentators that neither care for or support us. We will continue faithfully on that mission every day and have decided after discussions with customers to revert to the original ten per cent service charge of 2019,” the release stated.