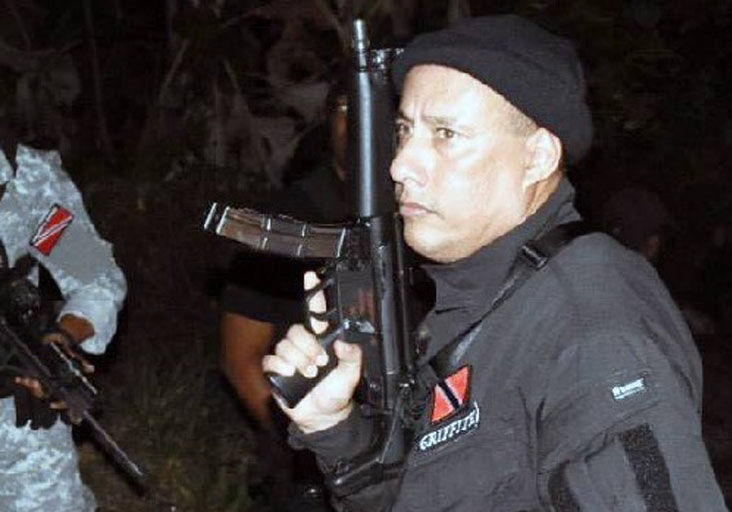 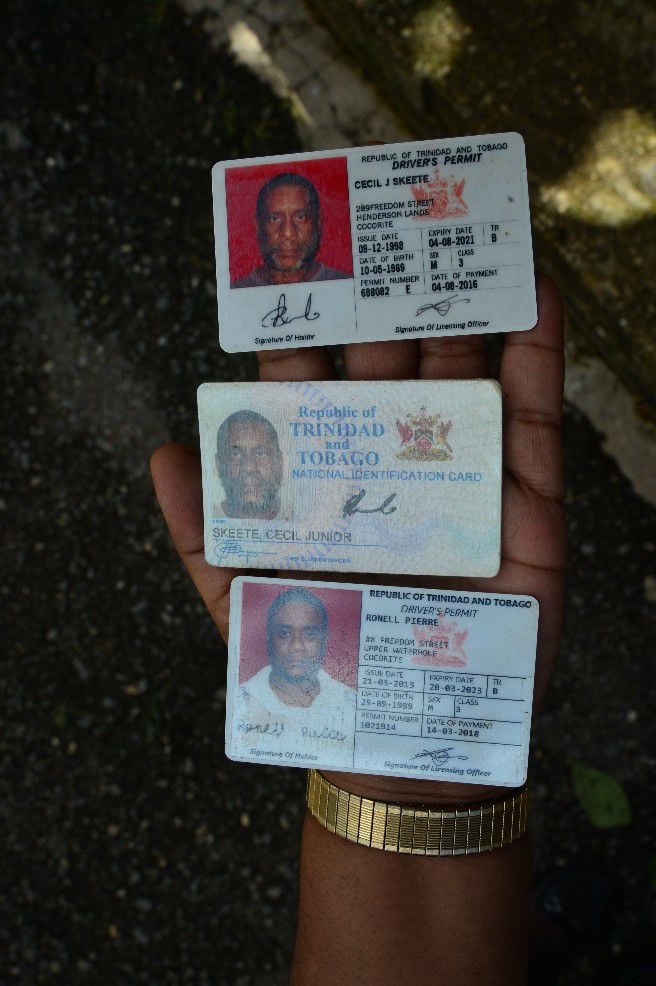 Proof of identity: Cocorite resident Cecil Skeete shows his driver’s permit and national identification card, from top, along with the driver’s permit of his son, Ronell Pierre, during an interview with the Sunday Express.

Proof of identity: Cocorite resident Cecil Skeete shows his driver’s permit and national identification card, from top, along with the driver’s permit of his son, Ronell Pierre, during an interview with the Sunday Express.

A COCORITE resident has filed a police report alleging that Police Commissioner Gary Griffith choked him and threatened to kill him.

The report was filed in June at the Four Roads Police Station in Diego Martin where the incident is alleged to have happened while the resident was detained and in custody for questioning.

The entry lodged in the diary at the police station alleges Griffith placed a gun to the head of Cecil Skeete saying, “I could kill you and say to my men that you try to take my gun.”

The Sunday Express understands that officers attached to the Special Operations Response Team (SORT) were present during the alleged incident.

Additionally, the Station Diary Day Duty, in which the complaint was recorded by a police officer on duty at the time, was seized and remains unaccounted for.

Officers who were on duty at the Four Roads Police Station during the incident have since been transferred out of the Western Division.

Prior to the diary being seized, a picture was taken of the entry.

The entry, dated June 21, 2019, entered at 10.25 a.m., says, “15542 ag Sgt Hannibal notes, that between the hours of 9.50 a.m. and 10.15 a.m., he went to the cells at the Four Roads Police Station and whilst there prisoner Cecil Skeete of #289 Freedom Street, Harding Trace Cocorite reported that around 6.30 p.m. on Thursday 20th June 2019, he was removed from the cells at the station and taken to a room which he believes is the id parade room and whilst there he saw the Commissioner of Police Griffith who choked him and placed him up against a wall and placed what he believes to be a gun against his head and said, ‘I could kill you and say to my men that you try to take my gun’.

“He also reported the said Griffith punched him to the stomach and told him that he can give him cocaine and start him off with a two (2) years. He also reported that he will be going to Police Complaints when he got out of jail.”

Contacted by the Sunday Express on August 9, at 6.42 p.m., director of the Police Complaints Autho­rity (PCA) David West was asked whether the PCA had received any official complaint regarding the alleged incident regarding Griffith.

West had indicated he was out of the country, but as far as he was aware, nothing had reached the PCA regarding the alleged incident.

On November 20, at 7.55 a.m., the Sunday Express e-mailed questions to the Corporate Communications Unit of the TTPS seeking a comment from Griffith.

An e-mail was also sent to its director, Nadine Hackett. On November 21, a reminder e-mail was again sent to the TTPS at 10.27 a.m. and copied to its communications manager, Francis Joseph, as well as the Communications Department of the Ministry of National Security, but no response was forthcoming.

Another reminder e-mail was sent last Friday at 3.32 p.m. To date, neither the TTPS nor Griffith has responded, but the Sunday Express is reliably informed that Griffith has seen the questions.

During an interview with the Sunday Express on November 12 in Cocorite, Skeete said he is weighing his options as to his next step.

Quizzed on the allegations contained in the station diary against Griffith, Skeete said he stands by what was reported.

“What happened was like out of a movie,” he said.

Asked how and why he was ta­ken into custody, Skeete said, “It was not me alone, but we were all separated. I was taken to the Four Roads Police Station.”

Adams was killed by police on July 25.

That investigation is still ongoing.

Skeete said Ronell was shot and killed in August while sitting in a vehicle at Harding Place, Cocorite.

Police reports had said that around 8.30 a.m. that day, the youn­ger Skeete was approached by a group of men who shot him several times.

He managed to get out of the vehicle but collapsed on the road and died.

“The day I was taken into custody, my son called me asking that I come up John Street. I went and Dole was there liming, too. I was like, ‘Boy, you here?’ and a group of us started drinking. Next thing I know, police come and raid the place; they didn’t find anything but say they holding us for 72 (hours) anyways. Some were taken to Four Roads and others to St James.”

“While being held at the Four Roads station, officers will pass my cell saying, ‘Ah, boy! You is a big one.’

“I thought they were referring to the fact that I was held alongside Dole...so I told them I was not involved in anything and to listen to two sides of a story before they talk. I have other kids and they not in any­thing. I tried with my son (Ronell), but is only so much a parent can do.

“Then they (officers) told me the Commissioner coming to see me.”

Skeete said he was taken to a room where upon entering, he claimed to have seen Griffith “seated and playing with a gun. It was like the way you see in a movie.”

Skeete told the Sunday Express that officers attached to the Four Roads station were told by Griffith to exit the room and only SORT officers remained.

“A bulky SORT man was there and when the others left, the Commissioner said, ‘You is the one they does call Skeete? I hearing a lot about you.’

Skeete said the room being pointed to looked like a storage space and was dark.

“I protested and one of the SORT men grabbed and started pushing me into that room. I told him (Griffith), ‘Boss, we never had nothing, why you abusing me?’ He said he did not want to hear nothing and struck me. My hands were at my sides and I was cuffed by the big SORT man.

“I told the Commissioner my time had passed and I was trying to get my son out the gang life. The Commissioner then started getting on hysterical and threatened to kill me if I did not give and sign a statement indicating where the guns were. I told him anything I sign or give will be under duress, and I did not know what guns he was talking about.”

Skeete said Griffith and SORT officers subsequently left and he was taken back to the cell.

“I indicated to one of the offi­cers that I wanted to make a report about what happened.

Sleeve said the following day, Griffith returned to the station “in a nice way. He said he heard I wanted to make a report to the police and that I was going Police Complaints (Police Complaints Authority). He said we had a bad start and could work things out. I told him I just wanted to go home and I am fearful for my life”.

Skeete said he was again asked to sign a statement and refused.

“Mr Griffith told me that he is the Commissioner and, ‘I could have you killed as you walk out this station.’ He then said I was free to go.”

Skeete said he indicated he would wait for someone to collect him and asked the status of those in custody.

Checks by the Sunday Express revealed that in 2017, Skeete was arrested outside his home by offi­cers of the Western Division during an anti-crime exercise and charged with possession of a revolver and three rounds of .38 ammunition.

Questions sent to Griffith by the Sunday Express:

1. On June 20, 2019, did you, along with officers from the Special Operations Response Team (SORT), visit the Four Roads Police Station?

2. Did you, along with officers of the SORT, physically assault Cocorite resident Cecil Skeete?

3. It is claimed that you threatened to kill resident Cecil Skeete based on information in your possession that Mr Skeete and/or his relatives were involved in gang activities? Is this true?

4. It is also claimed that you threatened Mr Skeete whilst holding a firearm to his head. Is this true?

The man who claimed Gary choked/punched him, has been killed

Cecil Skeete, the man who claimed that Commissioner of Police Gary Griffith choked and punch…

AN investigation into allegations that Commissioner of Police Gary Griffith choked and threatened to kill a Cocorite man cannot start, as the Police Complaints Authority (PCA) is not properly constituted.

We stand by our story

The Law Association of Trinidad and Tobago (LATT) wants the Police Complaints Authority (PCA) and the Police Service Commission (PSC) to launch an “immediate and expeditious” probe into an Express investigative report in which a Cocorite man claimed Police Commissioner Gary Griffith had assaulted him.

In an interview at his Port of Spain office yesterday, newly appointed PCA Director David West said the matter which was published in an Express investigative report required a “certain urgency”.

Nicole Dyer-Griffith is speaking up in defence of her husband, Police Commissioner Gary Griffith.