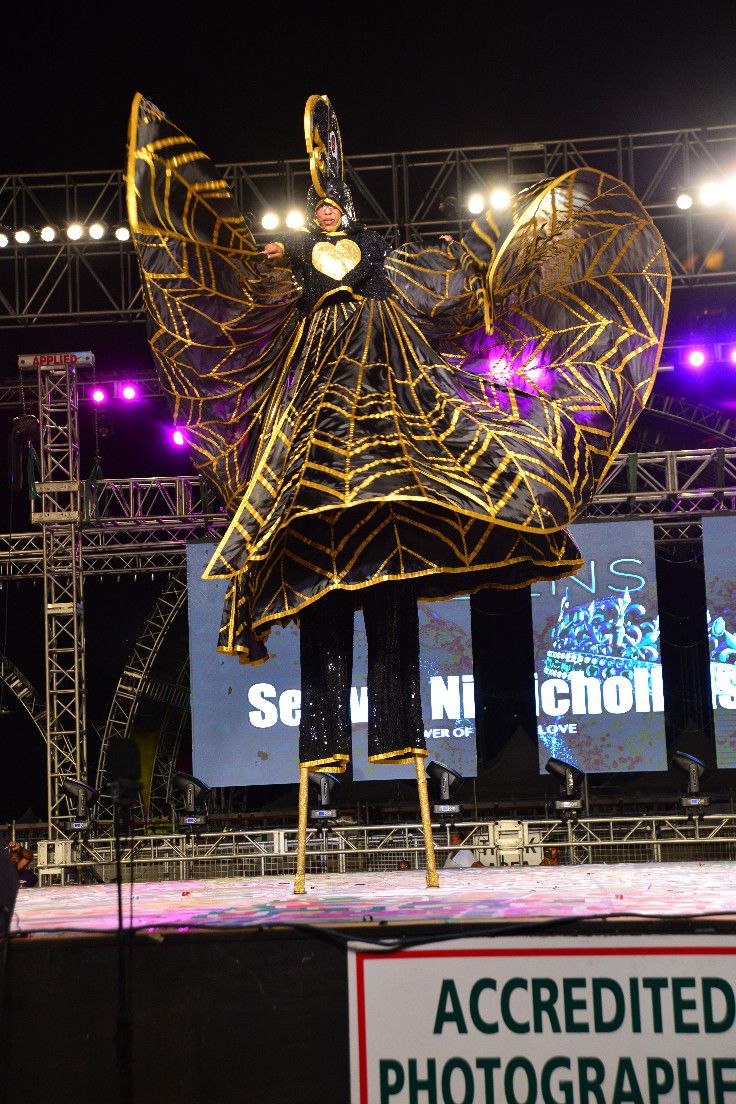 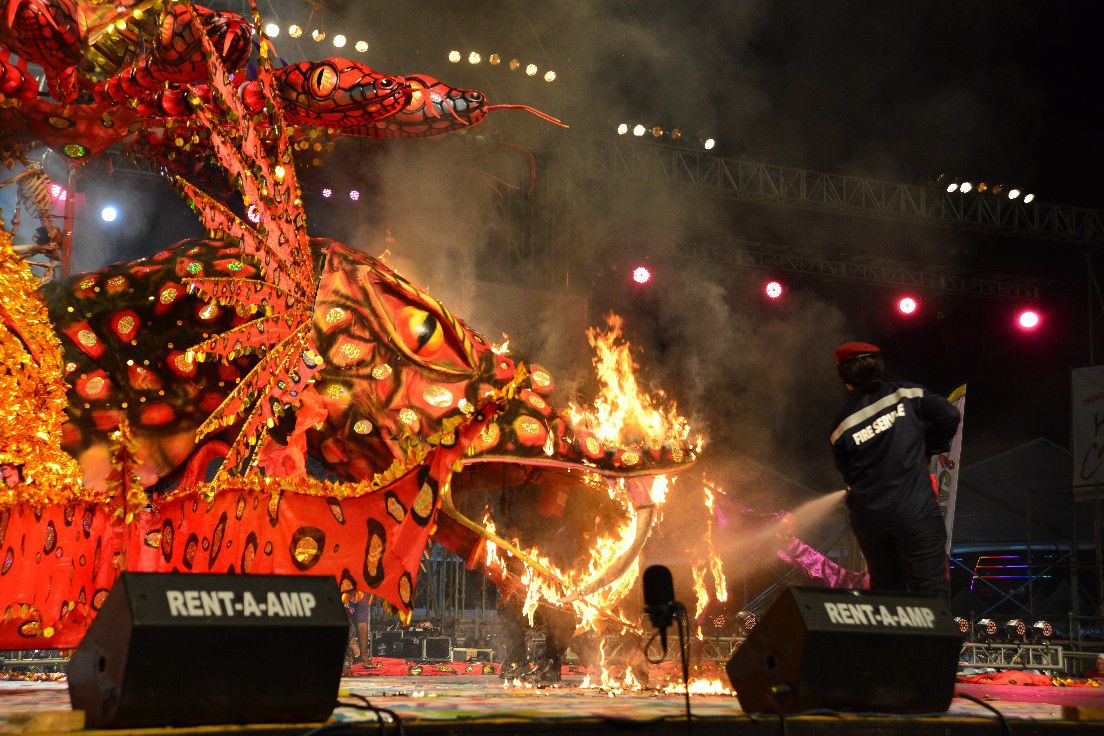 ON FIRE: A fire attendant puts out the flames on Ravi Lakhan’s portrayal “Diablo—Lord Of Conflict and Terror”. 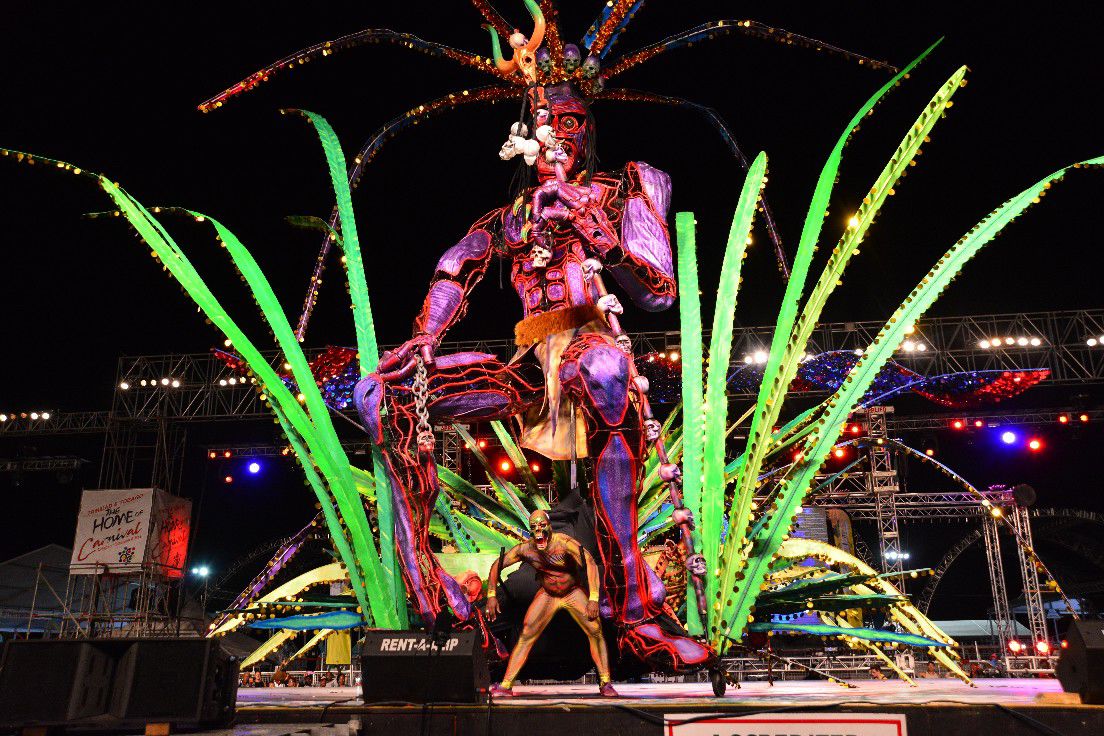 The Voudun King of Death”.

ON FIRE: A fire attendant puts out the flames on Ravi Lakhan’s portrayal “Diablo—Lord Of Conflict and Terror”.

The Voudun King of Death”.

“Fabulous.” That was the sentiment expressed by newly crowned 2020 King of Carnival Ted Eustace at Dimanche Gras held at Carnival City, Queen’s Park Savannah, Port of Spain, on Sunday night.

Wearing a cast on her hand, 2020 Queen of Carnival Roxanne Omalo, went on to “bring home the crown for Sangre Grande and Mayaro”.

Thomas, a talented playwright, and his team also had their share of drama when Ravi Lakhan’s portrayal “Diablo—Lord Of Conflict and Terror” caught fire. The audience breathed a collective sigh of relief when presenter Jemma Jordan reassured everyone, “The masquerader is okay.” It was a tense moment when the stage crew noticed something was amiss, and, a fireman with extinguisher in hand, arrived on the scene, and, began putting out the blaze on the dragon’s mouth. The wire was left exposed.

Later, Thomas said: “They are calling me an “obeah man.” But I am a praying man. Moments before, something just told me to tell the crew “make sure we have fire extinguishers nearby”. Lakhan finished in position number ten.

Asked to share his sentiments, Eustace, who made use of technology, said: “I put in about $120,000 to put it on stage. I would like to see the prize increase. We ensured we worked together as a team. My brother (Curtis Eustace) was a live wire in helping me.”

He has won the crown three times.

Omalo added: “This is my last year. I have been doing this for ten years. I want to focus on bringing out a kiddies’ band in Mayaro. It is my way of giving back. I want to dedicate my win to my late mother Marian Omalo. She passed away about four years ago. She was always here supporting me. I would advise young people to never give up.”

On Lakhan’s setback, Omalo said: “When you go through that kind of preparation for about eight months, and, then something like that happens it really hurts. But he will get out of it.”

The segments were “De Lime Before the Show”, followed by the opening presentation “Trinbago is a Sailor Mas”. The show opened with a performer carrying a conch shell, that appeared orange at times, and, even blowing on a conch shell. After the kings and queens, elements including “Presentation, Sailor Redemption” and “Celebration” followed. They were joined by a star-studded cast including 2020 Calypso Monarch Terri Lyons, Machel Montano, Nailah Blackman and Patrice Roberts. Veteran artistes including Mavis John and Drupatee (Ramgoonai) also thrilled the audience with their offerings. As patrons exited the Savannah, several people complimented Thomas on “a good show”.

2. Sevel Nicholls— “The Power Of Love”

Put calypso back into Dimanche Gras

One radio station polled its audience on the debacle that was the 2020 National Calypso Monarch competition. The station wanted to know whether the calypso finals should go back to the Dimanche Gras.

On Thursday 13, February mas lovers were treated at the Carnival Kings and Queens preliminary competition at the Queen’s Park Savannah in Port…

TEN Kings and ten queens will compete in the finals of the King and Queen of Carnival, following Thursday night’s preliminary competition at the Queen’s Park Savannah in Port of Spain.

EVEN before becoming aware that his first Carnival offering in 12 years, Mas Pieta, had been named Large Band of the Year for Carnival 2020, m…

Criminals have taken advantage of the shutdown in the country to go on a crime spree, burglarising and looting several businesses in the capital city.

Non-essential businesses in Tri­nidad and Tobago have been shut down until April 30, in an effort to contain the deadly COVID-19 virus.

Government has engaged four private security firms to conduct these mobile patrols in communities from April 6 to May 5, “in the first instance”.

When it comes to staying home, Trinidad and Tobago has been the least compliant over its regional counterparts. That’s the finding of Market Facts and Opinions (MFO), on analysing Google’s COVID-19 Community Mobility Report dated April 4.

‘Fishermen’ to be charged for breaching borders

Several persons posing as fishermen have been ­arrested and will be charged for breaching the country’s borders, National Security Minister Stuart Young has disclosed.