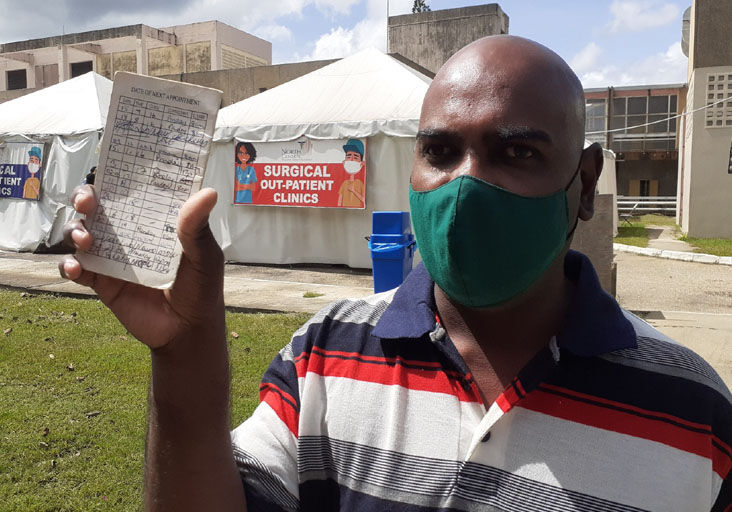 In black and white: Avin Balroop, an epileptic outpatient at the Eric Williams Medical Sciences Complex, Mt Hope, displays his medical card two Fridays ago at the hospital, showing how many times his appointment has been rescheduled since the pandemic. —Photos: Curtis Chase 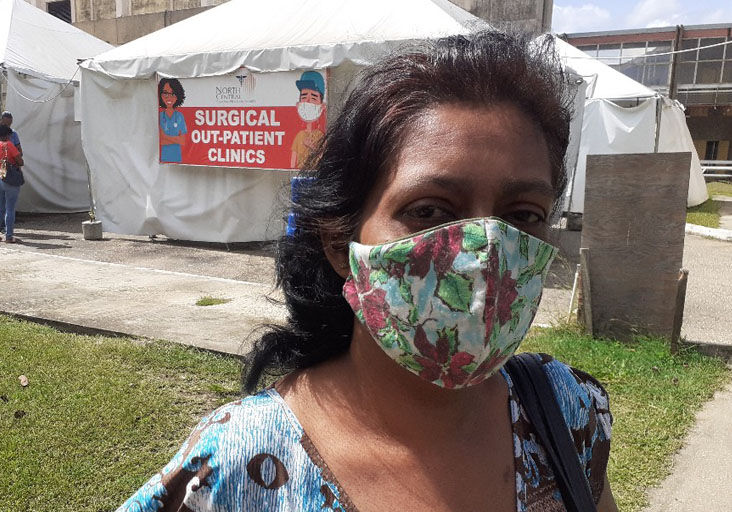 In black and white: Avin Balroop, an epileptic outpatient at the Eric Williams Medical Sciences Complex, Mt Hope, displays his medical card two Fridays ago at the hospital, showing how many times his appointment has been rescheduled since the pandemic. —Photos: Curtis Chase

This is gleaned from the many interviews done by the Sunday Express with patients at the complex over the last few weeks.

During our visits there, many outpatients from the Medical and Surgical outpatient clinics complained of lack of caring service.

One patient lamented, “They keep saying it’s because of ‘Covid, Covid’, but it’s not. They are grossly mismanaged. They have a backlog. If you see people does be here waiting. And every time you come for your appointment, they put you off for another day. I was admitted to the clinic in July last year. I got rescheduled to September. When I went back in September, they put me off (to) January, and now today I got pushed back to April 2021.”

She added: “It’s frustrating for people who not working. When you keep pushing back the dates, you have to find money to keep traveling to come to the hospital. It’s a pandemic, so money is already tight and needed to pay my bills and buy food.”

Another patient said: “Covid don’t have nothing to do with it. Covid is just an excuse. I’ve been here five hours now. (The service) is very poor!”

A relative of a diabetic patient related: “My dad did surgery and two of his toes were removed. He needs to have his follow-up and see a doctor, and up to now he can’t see a doctor. He can’t even go the health centre because Mt Hope has to clear him first. This is ridiculous now. Since March last year he did surgery.”

Another patient, Natasha Ballantyne, said it is frustrating. “Every time you come, they keep pushing back, pushing back (your appointment date). I understand it’s Covid time, but still,” she said.

The mother of epileptic patient Avin Balroop said: “No reason! No reason at all. The appointment before today was in June last year. Now our appointment was today and we got put off until March 12.

“We had to hire a taxi from Piarco to Mt Hope and pay one hundred and something dollars for no reason. We left home without even cooking lunch because we didn’t want to miss the appointment.

“We were expecting to see Dr Panday. This is the second time now. They’re overdoing it. It’s a massive backlog even before ­Covid.”

Other patients told the Sunday Express that at the start of the spread of Covid-19 locally last March, all appointments were rescheduled, causing the backlog.

Others said no appointments were given during the Christmas-into-new year season, and less staff were seen at the hospital at the end of the year, adding to the problem.

In addition to their appointments being rescheduled, many patients complained about the length of time they have to wait under a tent outside the hospital building before being attended to.

One patient from Arouca said, “The public health system is a problem. You shouldn’t have to be waiting so long.”

Another patient shared his experience: “They called us yesterday to confirm our appointment for today at 8 a.m. We’ve been here since 7 a.m. and there were about 12 persons here already. It’s almost 11 a.m. now and we’re still waiting. This is crazy.

“It’s clear they definitely have an overload and need to do something about it. Your entire day is wasted here, and we’re not sure to get attended to.”

The Sunday Express was told many patients are elderly and it’s an inconvenience having them wait under the tents outdoors without any air-conditioning and limited portable toilets.

Patients complained that the tents were too far away from the entrance of the clinic and as such elderly patients, many who could not walk without assistance were having difficulty.

Another relative of a patient said: “My father is 82 and they have him back and forth and he could barely walk. Why can’t patients just stay one place? Old people have to be up and down. That’s nonsense.

“The doctor not even here. It’s more than three months now they have us doing this round-around. He was at Sangre Grande (hospital), and they sent him here and it’s the same problem.”

Some patients also complained about the poor service they received inside the clinic.

Patients described the staff as rude, many holding conversations amongst themselves and ignoring them. And some patients said they believed this to be a reason for the long wait.

Additionally, the patients said they do not believe the measures at the hospital put in place for outpatients were in keeping with public health regulations because many people are crowded under the tents.

There were also no sanitisation stations under the tent, it was claimed.

Instead, patients said a better system should be put in place or they should be allowed to wait inside the hospital building, as was customary pre-Covid.

As a solution to the problems faced, the elderly patient and his relatives suggested: “Separate the appointments. Although they call you the day before to confirm, they clearly overbook people. Make sure the doctor in question is actually at work the day a patient is scheduled to see him.”

Another patient told of his experience: “When you come, you have to go inside and give your information,then come and wait under the tent and wait for your name to be called.

“Hours pass and no one comes to give you any information, so you feel as though you’re forgotten outside here.

“When you finally hear your name, they give you a small piece of pink paper with nothing written on it, and tell you to go inside.

“According to what you have to do, whether it’s an X-ray, ECG or some sort of test, you go in, do it, and you’re back outside in the tent. That not making any sense.”

While the Sunday Express was interviewing the patients, frustrations grew amongst other patients who said they were waiting for hours, and one woman was heard shouting obscenities at the staff.

While at the Mt Hope hospital, the Sunday Express also observed that when it began raining, patients were not protected under the tents.

When the Sunday Express contacted Deyalsingh last week, he redirected us to chief executive officer of the North Central Regional Health Authority Davlin Thomas for a comment.

Trinidad and Tobago is to receive a significantly increased supply of Covid-19 doses from the Afri­can Medical Supplies Platform (AMSP).

This country, which was initially set to get 226,000 doses, will have a near doubling of this allocation to 426,000 from the AMSP.

She said if these ministers were doing their job, she would not have to write India’s Prime Minister, Narendra Modi, requesting vaccines for the people of Trinidad and Tobago.

“Join us on Tuesday as we take a day off—The Genesis.” This was Duke’s message sent to all public service workers across all platforms.

And the PM will hold another meeting at noon with THA Chief Secretary Ancil Dennis and former THA chief secretaries and chairmen.

Opposition MP begs for vaccine to save his life

“I am 72 years of age, it’s probably my last years in Parlia­ment; I am in an at-risk group and therefore vulnerable to the ravages of Covid. I thought I would leave Parliament in honour, but it looks like under this PNM, I’m going to leave in a coffin,” he said at the United National Congress (UNC) virtual meeting on Monday.

Infant injured in fall from house