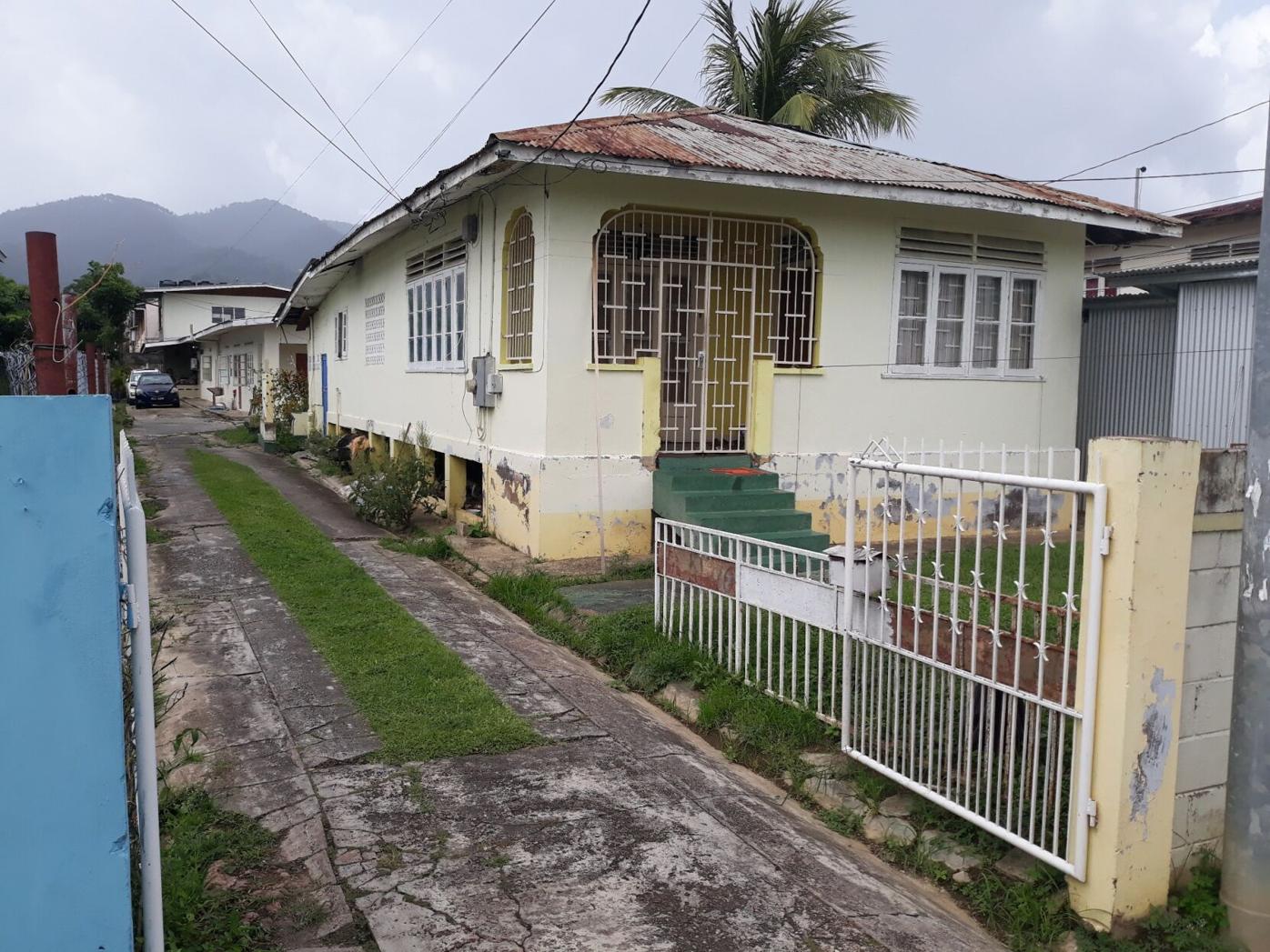 WHERE SHE WAS KEPT: The entrance leading to the apartment where kidnapped baby Sofia Rivas was rescued on Tuesday night at McInroy Street, Curepe. —Photo: GYASI GONZALES 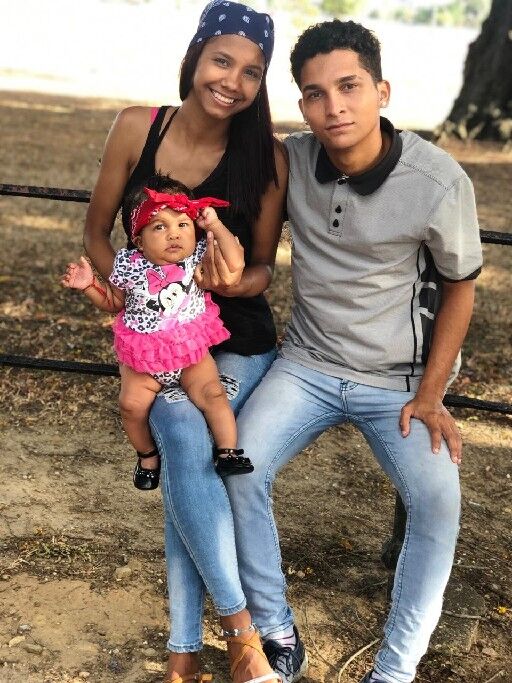 REUNITED: Venezuelan couple Valentina Hernandez, 18, and Marco Rivas, 21, with their daughter Sofia in a family portrait. Baby Sofia was reunited with her parents on Tuesday night after she was abducted earlier in the day by a woman in Chaguanas. —Photo courtesy MARCO RIVAS

WHERE SHE WAS KEPT: The entrance leading to the apartment where kidnapped baby Sofia Rivas was rescued on Tuesday night at McInroy Street, Curepe. —Photo: GYASI GONZALES

REUNITED: Venezuelan couple Valentina Hernandez, 18, and Marco Rivas, 21, with their daughter Sofia in a family portrait. Baby Sofia was reunited with her parents on Tuesday night after she was abducted earlier in the day by a woman in Chaguanas. —Photo courtesy MARCO RIVAS

TO have your baby stolen and not know whether you would hold her again was Valentina Hernandez’s worst nightmare.

Hernandez’s nine-month-old daughter, Sofia Rivas, was rescued by police in Curepe on Tuesday night after being kidnapped by a woman who had visited Hernandez’s Chaguanas apartment earlier that day and then demanded a $20,000 ransom.

“If it is one thing in life that I do not wish it to any family, especially to a mother when I felt in the situation that my daughter was stolen from me that the world fell apart and the despair is so great that you feel that you want to lose your life thinking that your daughter will not return,” Hernandez told the Express in a telephone interview last night.

The 18-year-old mother said she and her family have not slept and were worried sick about Sofia, praying feverishly for her return.

Hernandez said Sofia is the light of her life and she could not imagine life without her. She was fearful that danger would befall her child.

“Since she was born she has filled joy to our life that we have always said our blessing to God,” she said.

Hernandez said when she realised Sofia was kidnapped she felt hopeless and grew sick as she did not know the woman who took her baby and where to even begin searching.

She said she started panicking about what they could possibly do with her baby.

“That feeling and that position is something that I could not describe in a sense of incomparable pain and that I do not wish to any family and especially to a mother,” she said.

Hernandez extended thanks to the Police Service for their efforts in returning her baby and to all who lent help searching and lending support.

She said her family is happy and overwhelmed with joy to have Sofia back.

Hernandez said Sofia was very hungry and tired when she was returned to her arms in safety.

“Thanks to the blessing of God, to recover our daughter, she was not well...she had a lot of hunger and super tired, in the morning when I woke up she woke up the same and thank God in these moments she is already a lot better thanks to God,” she said.

Meanwhile, Sofia’s father, Marco Rivas, 21, has expressed concern for the safety of his family.

“I am afraid for my family,” he said.

The Express yesterday visited the apartment at Pokhor Road and Longdenville Main Road, Chaguanas, which he shares with Hernandez but they were not at home.

Police said on Tuesday morning, Hernandez reported that her baby was taken from the apartment compound by a woman without her permission.

She said the suspect came to her apartment around 7.30 a.m. and asked if she could take the baby for a walk to a small grocery on the compound and buy her juice.

Hernandez said the baby had a slight fever but handed over the child.

When some time had passed Hernandez realised that the woman had disappeared with her child following which she called the police.

CCTV footage later showed the woman with the baby leaving the area in a silver-coloured Nissan AD Wagon.

Hernandez later also told the police that she received a call demanding $20,000 for the safe return of the baby.

The Express visited the small apartment complex in Curepe from where the baby had been rescued by police but after several calls none of the other tenants responded.

Their neighbours however said they didn’t notice anything strange for most of Tuesday until around 11 p.m. when the police raided the place.

“To be honest, we didn’t hear anything until late last night (Tuesday night),” said a woman who was with her friend on her porch.

Asked if they heard a baby crying she said no.

“We heard a lot of talking coming from those apartments which is not something unusual but we didn’t hear no baby or anything,” she said.

A man who lived opposite the apartments said neither he nor his neighbours noticed anything different on Tuesday. “We didn’t notice anything until that baby got rescued, there was no crying or anything from that child,” he said.

Police said that, acting on intelligence, an exercise was carried out around 10.50 p.m. on Tuesday at a row of apartments at McInroy Street, Curepe, where they found and “clinically” extracted the baby.

A 19-year-old woman of California, Central Trinidad, and another suspect who were found with the baby were detained and were being questioned up to last night, police said.

A nurse, who police said is a “bookkeeper” for the Drugs Sou Sou (DSS)organisation, was robbed of around $325,000 on Thursday night.

As five more bars shut their doors permanently in the last two weeks because of significantly declined earnings, head of the Barkeepers and Operators Association, Teron Mohan, is keeping his fingers crossed that today Prime Minister Dr Keith Rowley will bring the sector some positive news.

A SUDDEN crash in either the Judiciary’s computer system that allows for virtual court hearings or a disruption in Internet service yesterday resulted in several court matters being adjourned.

‘No change’ in Catholic teachings

LOCAL parish priest Fr Dexter Brereton says there is no change in the teachings of the Catholic Church regarding marriages despite reports that Pope Francis has endorsed same-sex unions.