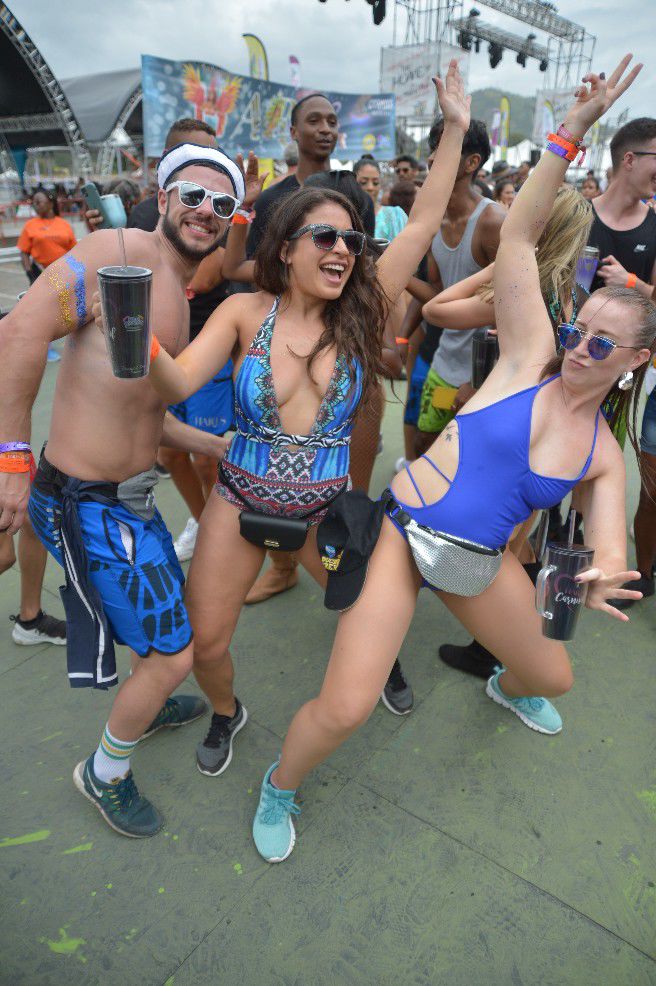 THEY’VE GOT THE MOVES: Harts revellers prance on the Savannah stage yesterday. 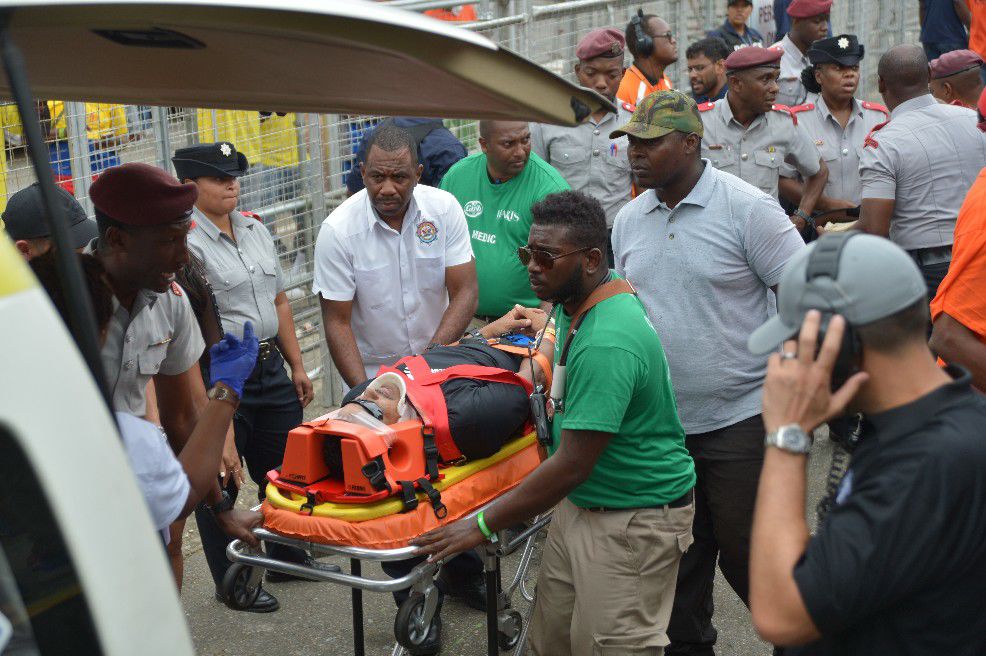 TOOK A TUMBLE: Members of the Fire Service attend to a masquerader who fell off the Queen’s Park Savannah stage yesterday. —Photo: DEXTER PHILIP 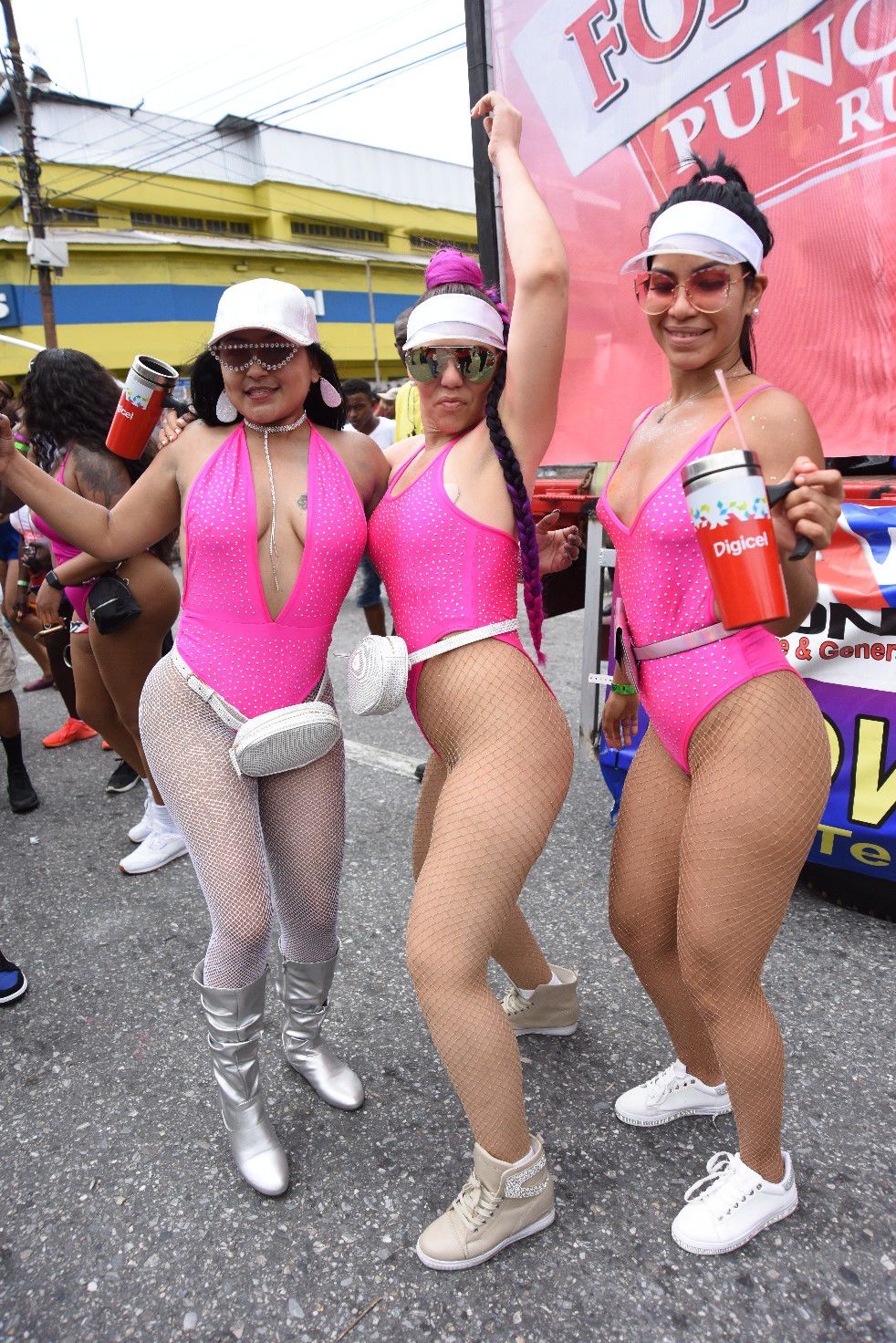 THEY’VE GOT THE MOVES: Harts revellers prance on the Savannah stage yesterday.

TOOK A TUMBLE: Members of the Fire Service attend to a masquerader who fell off the Queen’s Park Savannah stage yesterday. —Photo: DEXTER PHILIP

However, for one Hart’s masquerader the song took on a different meaning.

Around 12.51 p.m. the 57-year-old man was crossing the stage with his band to the soca hit when he lost his footing and fell off the northern edge of the stage and onto the roadway designated for music trucks.

Fire service medics stabilised him and transported him to the St Clair Medical Centre for treatment, he said.

In light of the accident, Wallen has again urged masqueraders to heed the advice of Police and Fire officers on the parade route, to avoid injury.

“Listen, listen! With all the fun and alcohol, just listen to us. We are not here to affect but assist you so you can party safely,” he cautioned.

“There is life after Carnival. We’ve seen so many injuries already because people have not been listening,” he added.

Harts was the first large band to cross the Savannah stage yesterday with their portrayal Metanoia.

The accident delayed proceedings for about 15 minutes. Then it was back normal.

Following close behind Harts was large band, Bliss, at 1 p.m., with their portrayal Nectar.

Masqueraders were in their glee as they jumped to Kees and Iwer’s “Stage Gone Bad”.

Public Utilities Minister Robert Le Hunte and his family were among Bliss masqueraders.

Paparazzi and the Lost Tribe were up next and their song of choice was also “Stage Gone Bad”.

By 2 p.m. when medium band K2K Alliance was ready to hit the stage, a heavy downpour drenched masqueraders.

But they seemed unperturbed.

K2k’s portrayal this year was titled The Greatest Show.

For about four hours yesterday morning, spectators at the Savannah were thrilled by the skilful performances of traditional mas characters such as gorillas, fancy Indians, clowns, Dame Lorraines, minstrels and dragons.

By 3.45 p.m., “Stage Gone Bad” was the most played song, according to an official of the Trinbago Unified Calypsonians’ Organisation (TUCO), the body responsible for tabulating the Road March results. She noted that Machel Montano, Skinny Fabulous and Iwer’s “Conch Shell” was played only once up to that time.

Speaking to the media at the Queen’s Park Savannah around 12.15 p.m., National Security Minister Stuart Young reported that Jouvert celebrations and parade of the bands “so far” were incident free.

“All the reports from Jouvert celebrations across the island- Point Fortin, Cedros, Arima, Tunapuna, Port of Spain, San Fernando, have all come back good reports so far. I hope we keep it up,” he said.

“As the day progresses and people add alcohol we continue to monitor and the Police and Defence Force continue to do their job,” he added.

Young said the glass bottle ban, which is in effect until midnight tonight, was also a success as people adhered to the rules yesterday.

On a lighter note, asked who was his pick for Road March, Young responded laughing: “I’m not getting in that. I remain unbiased.”

Commissioner of Police, Gary Griffith is commending citizens for their “exemplary behavior and their observance to the rule of law” during Jou…

IF you played or viewed mas in downtown Port of Spain yesterday, Iwer George and Kees Dieffen­thaller’s “Stage Gone Bad” is probably burned into your memory.

The song was played so many times, it is hard to imagine any other tune copping the 2020 Road March title.

ALTHOUGH there were fears that Covid-19 (coronavirus) would rapidly spread across Trinidad and Tobago following Carnival celebrations, this did not stop thousands of revellers and festival watchers from attending this year’s Parade of the Bands at the Queen’s Park Savannah in Port of Spain, yesterday.

IT is a very sweet feeling.

Carnival off the hook: Virus did not spread then, says CMO

As the Covid-19 positive count grows and people die, there has been a persistent storyline, …

A Laventille man was granted $150,000 when he appeared before a Port of Spain Magistrate thi…

A San Francique man was granted $70,000 bail when he appeared before a Siparia Magistrate vi…

Warning for Covid slackers, the police will act

Some people in Trinidad and Tobago still think the stay at home order is optional, and they …

Later today, the first set of COVID-19 patients will be transferred from the Couva Hospital …