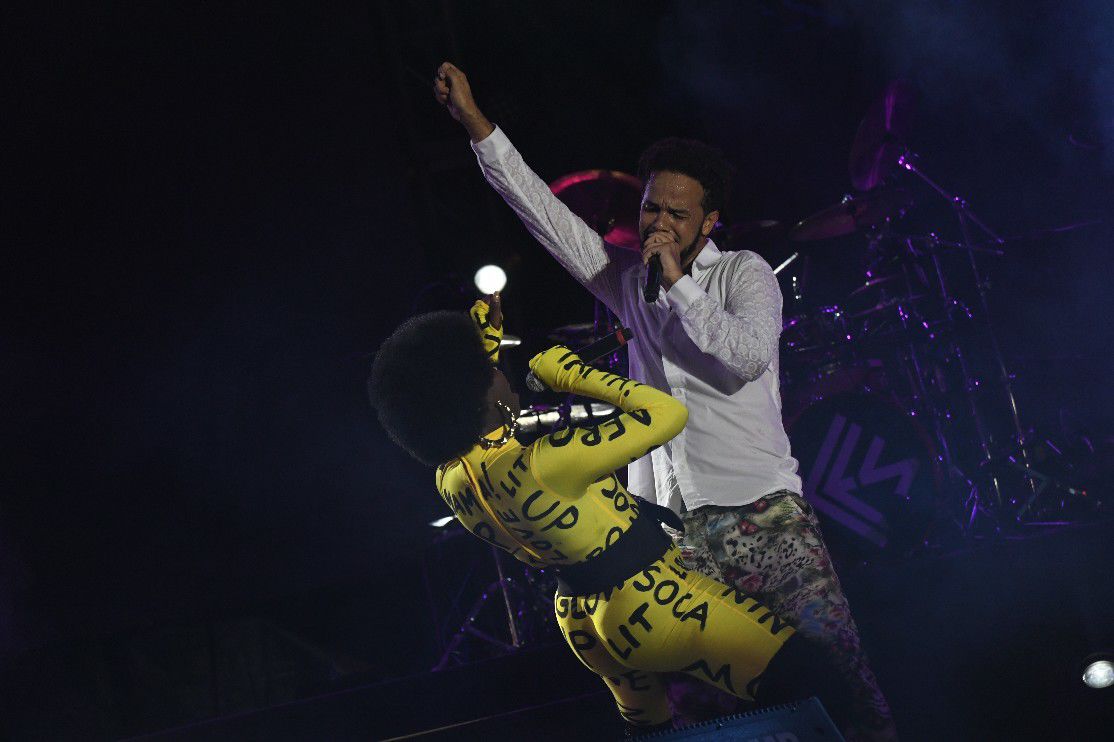 UP-TEMPO: Terri Lyons and Kees perform “Throwback Ting” during Tuesday on the Rocks. 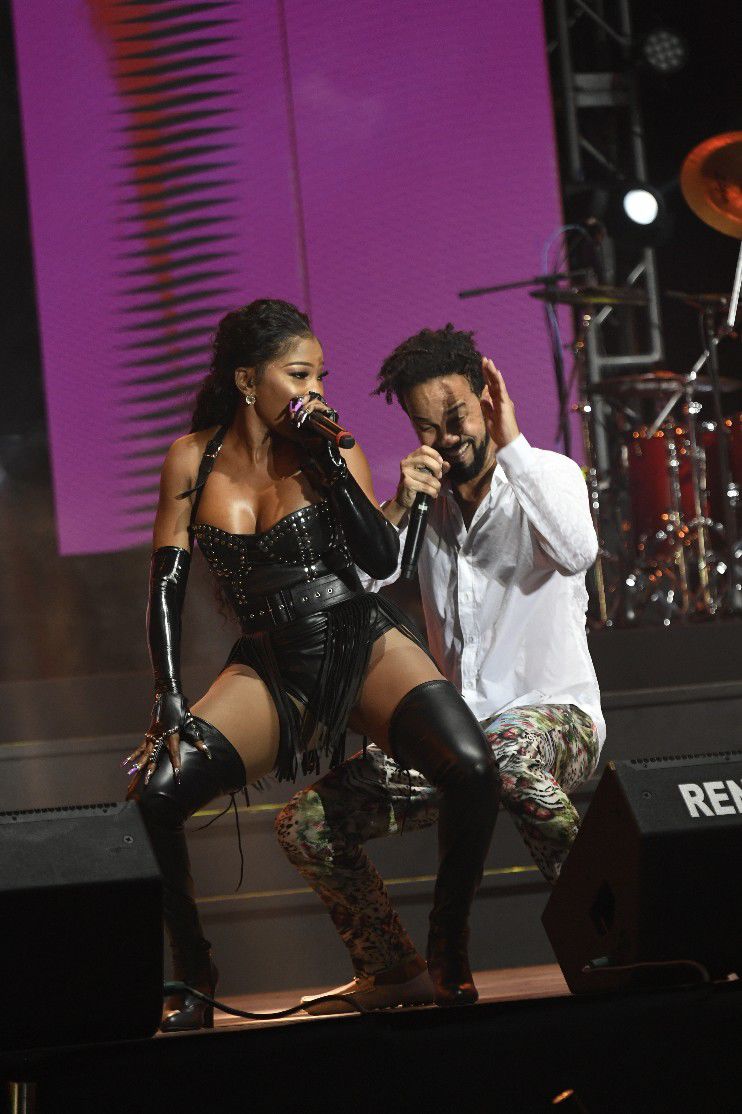 GETTING GROOVY: Soca artistes Kees Dieffenthaller and Patrice Roberts dance during their performance on Tuesday night at Kees’ concert, Tuesday on the Rocks, at the Queen’s Park Savannah, Port of Spain. 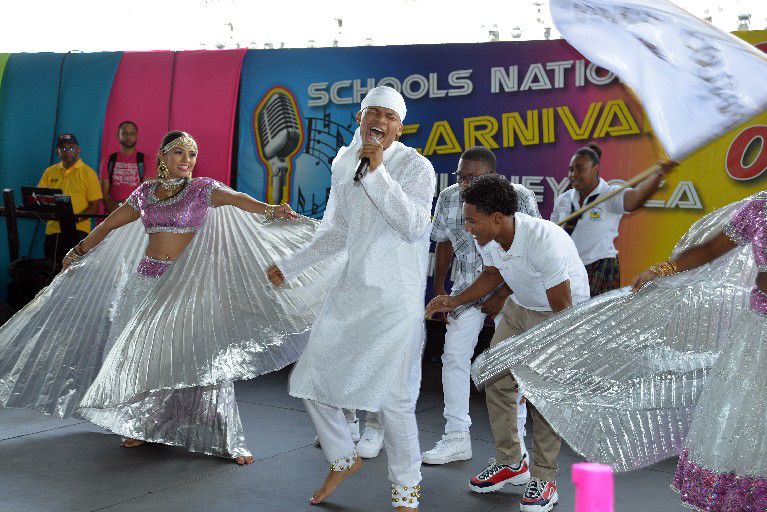 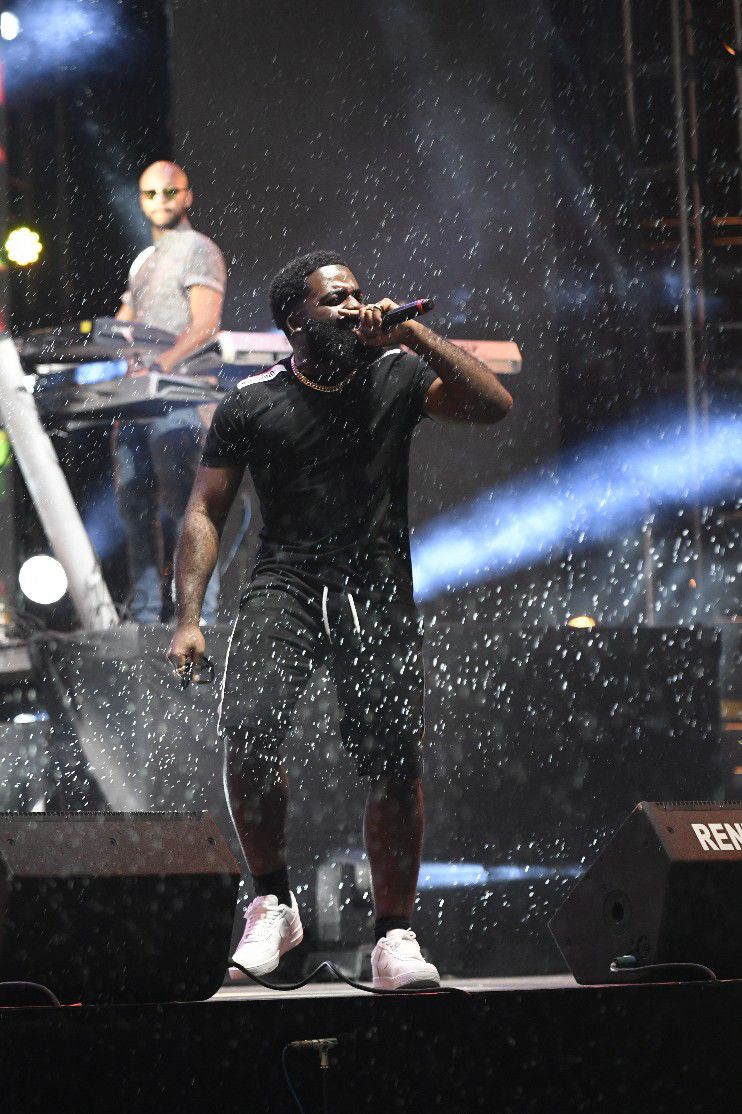 SINGING IN THE RAIN: British DJ/singer Afro B didn’t let the drizzle interrupt his performance on Tuesday night.

UP-TEMPO: Terri Lyons and Kees perform “Throwback Ting” during Tuesday on the Rocks.

GETTING GROOVY: Soca artistes Kees Dieffenthaller and Patrice Roberts dance during their performance on Tuesday night at Kees’ concert, Tuesday on the Rocks, at the Queen’s Park Savannah, Port of Spain.

SINGING IN THE RAIN: British DJ/singer Afro B didn’t let the drizzle interrupt his performance on Tuesday night.

THE race seems to be already over.

Kees and Iwer all but telegraphed the results on Tuesday night after their Savannah-shaking showing at the Tuesday on the Rocks (TOTR) concert.

Together they generated unprecedented ruckus when they pointed a riled-up horde of would-be-masqueraders in the direction of the stage at the Queen’s Park Savannah, Port of Spain.

“When we come back Carnival Monday, and dem big truck start to play, when me and my section touch down is trouble, the stage not good again,” thousands of animated feters sang along verbatim as they pointed in the direction of the stage about 50 metres behind their location at Carnival City.

Much to the relief of on-duty uniformed police officers the masses didn’t actually charge the stage.

Instead their stomping feet took out their pent-up energy on the able Savannah tarmac as they waved.

Earlier Kees welcomed arguably his biggest TOTR crowd ever to “sacred” ground when he ran on stage just after 10 p.m. to an abridged version of his 2020 Road March anthem.

The Palmiste-born singer tempered the eager feteing crowd when he switched tempo to his bouncy 2019 Road March contender, “Savannah Grass”.

Touted by many as an early favourite for the title, Kees eventually lost out to Skinny Fabulous (Gamel Doyle), Machel Montano and Bunji Garlin’s (Ian Alvarez) fete shaker, “Famalay”.

A lime at Carnival City

The large crowd would have been happy with the change of venue.

On Tuesday there was a free flow of pedestrian traffic at Carnival City.

The VIP Executive Deck of the party also smartly laid out food stations, bars and rest points across the Carnival City stands on the north side of the Savannah stage.

The problem with the spacious layout was it didn’t provide a direct line of sight to the stage. There were also no screens, apart from one in the general admission area.

The oversight left hundreds of concert-goers disconnected from the actual happening on stage.

One concert-goer best summed up the 2020 TOTR experience when she told the Express: “Machel Montano threw a concert. Kees is throwing a lime. Both are excellent but very different experiences.”

Kees, meanwhile, recounted for his “People” his transition from schoolboy to full-fledged soca star.

“We start in Pres Sando auditorium. Now to see this on the Savannah grass...is allyuh love does keep we going,” the visibly emotional singer said.

He urged them to do everything possible to live as a national family.

“No matter if we cross paths and we split up, we still share something with someone. Don’t ever have no bad feelings for anyone in your life, let it go,” he said cueing Kes The Band into the 2016 hit.

When he switched tempos to his Carnival 2020 monster hit “Boss Lady” there was cheering through the audience.

“What’s that, yuh want me to take it off? I can’t show the world everything, baby, ah could only show you. All de boss ladies make some noise,” he teased, sending women patrons’ fervent screams an octave higher.

British DJ/singer Afro B (Ross-Emmanuel Bayeto) and Jamaican dancehall star Konshens (Garfield Spence) were the international acts to share the stage on the night with Kees.

Afro B with his “Joanna” afro beats global hit was well embraced by the appreciative crowd.

Kees, Jimmy and Etienne worked musical sorcery together during a special performance of their 2020 collaboration “Magic”.

Their performance was stellar and took the show beyond the limitations of a Carnival context.

Freetown, meanwhile, proved they may have the most underrated song of the entire Carnival in “Feel to Love”.

Despite little radio and fete play, the song is loved by soca fans and is only expected to grow in stature after Ash Wednesday.

There are still five days between now and then, however.

And there is only one song on the minds of every masquerader.

Let’s hope the stage can with stand the pressure.

Kees vs Kees this Carnival