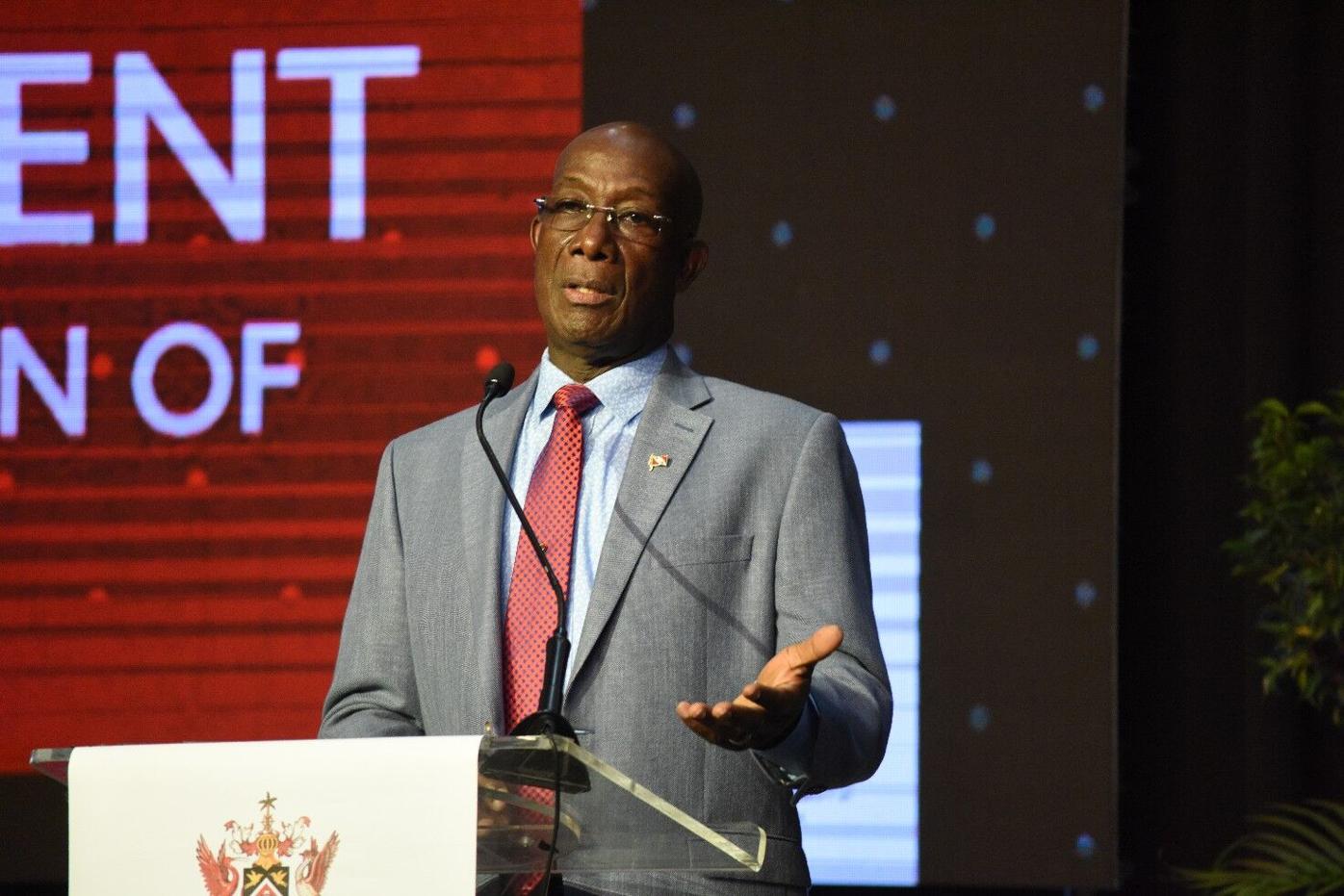 CALLS FOR DEVELOPMENT: Prime Minister Dr Keith Rowley delivers the feature address yesterday at a Spotlight session on Urban Development: The revitalisation of Port of Spain at the Hyatt Regency, Port of Spain. —Photo: CURTIS CHASE 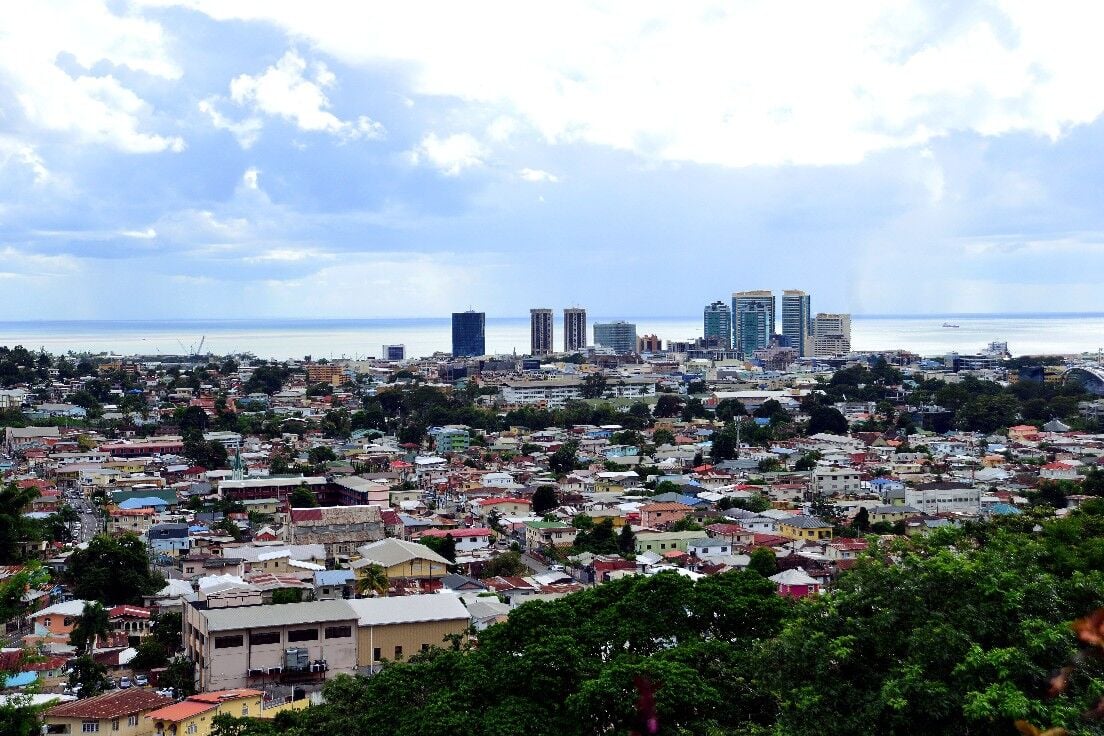 AERIAL SHOT: A view of the city of Port of Spain from the Lady Young Road, Morvant, yesterday.

CALLS FOR DEVELOPMENT: Prime Minister Dr Keith Rowley delivers the feature address yesterday at a Spotlight session on Urban Development: The revitalisation of Port of Spain at the Hyatt Regency, Port of Spain. —Photo: CURTIS CHASE

AERIAL SHOT: A view of the city of Port of Spain from the Lady Young Road, Morvant, yesterday.

One street — Queen Street — was yesterday described by Prime Minister Dr Keith Rowley as the “official toilet of Trinidad and Tobago”.

Downtown Owners and Merchants Association (DOMA) president Gregory Aboud said businesses in the city had migrated to the West in Woodbrook and Ariapita Avenue.

The plan, proposed by NLBA Architects, to be undertaken by the Urban Development Corporation of Trinidad and Tobago (UDeCOTT) in conjunction with the Ministry of Planning and Development, will see a mix of public and private investments, the creation of green spaces and a Steelband Theatre on George Street.

The revitalisation of Port of Spain is a vital project in the Government’s thrust to foster and stimulate integrated national growth, Rowley said.

It’s expected to unfold in phases, starting with Piccadilly Street.

To get there, Rowley is urging the private sector, with some $14 billion of capital at their disposal, to be part of the process because the Government does not have the ability to fund it.

In fact, the success of the rejuvenation will be entirely in the hands of the private sector with the Government’s role being facilitator and providing incentives.

“The best time to invest is in a recession,” Rowley said at a Spotlight session on Urban Development at the Hyatt Regency in Port of Spain yesterday.

Rowley lamented: “For decades, the city of Port of Spain has been experiencing considerable urban decay. This condition has manifested itself in a myriad of challenges such as reduced private sector investment, depopulation, abandonment and decrepit infrastructure, unemployment, destitution and high levels of crime.

“Between 1968 and 2015, 16 plans have been developed and have included the upgrading of cultural spaces, development of prime real estate for residential and commercial spaces, upgrading of key infrastructure such as roads and drainage to alleviate traffic and flooding issues.”

He believes that “the capital city of our nation is a major economic engine which, if oiled and maintained will create increased opportunity and benefit for a wide cross section of the national population”.

“In addition, focus will be placed on the necessary infrastructure, transportation networks and other services which are desirable to ensure success of the Revitalisation of Port of Spain,” he said.

The report which came after consultations was submitted by the consultant to UDeCOTT on February 10, 2020.

“The report presents the master plan which addresses the social and economic gaps which can stimulate the private sector to get more involved in the development of Port of Spain. It also envisions that reform by the Town and Country Planning Division will allow strategic development with only sensible constraints on height, density and building coverage,” he said.

He said the report recommended that Town and Country codes be applied to a regulating line and not a zone.

“Thus, the theme ‘The City of Festivals’ can be assigned to the regulating line, in an effort to catalyse and maintain year-round activity by bringing life and festivals back to the city,” he said.

The master “catalyst” projects to be implemented via Public Private Partnerships (PPP) for the revitalisation efforts are:

• Development of the UDeCOTT-owned property located at Keate Street and south of Memorial Block to house a Mixed-Use Complex inclusive of residential, commercial, office, parking and recreational spaces

(ii) Development of the Salvatori site

• This project is in the planning stage of development

• Development of the Stated-owned, former site of the Power Generation Company located at Wrightson Road

(i) That a defined list of incentives be developed for all Stakeholders, Developers, Financiers and Purchasers/ Users that are tax-based; and

(ii) That a step-by-step process of addressing the drainage system for the city, in terms of capacity, cleaning, outlets to the sea and introduction of retention and detention ponds at the foothills of the Northern Range, be developed.

In addition, the relocation of the Ministry of Agriculture from Queen’s Park West to Chaguanas, allowed for the renovation and upgrade of those premises which now house the Ministry of Foreign and Caricom Affairs.

A Couva fitness instructor, business owner and motorcyclist was killed in a vehicular crash …

People are stressed out and angry as the Covid-19 virus continues to plague Trinidad and Tobago.