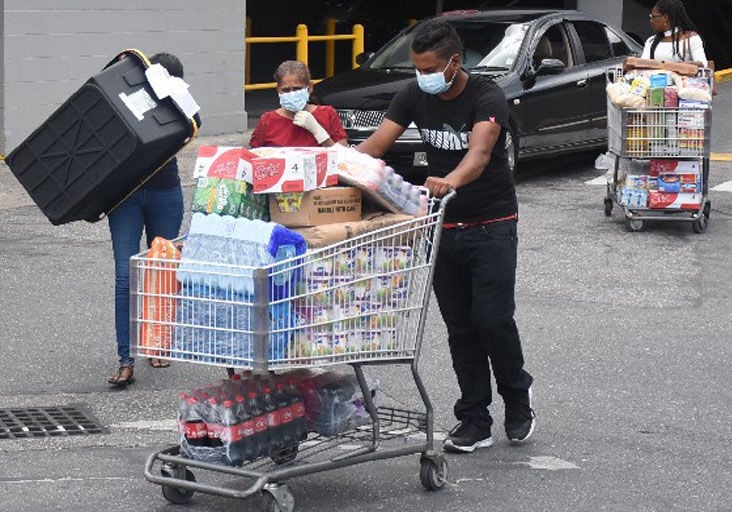 push their grocery carts outside PriceSmart in 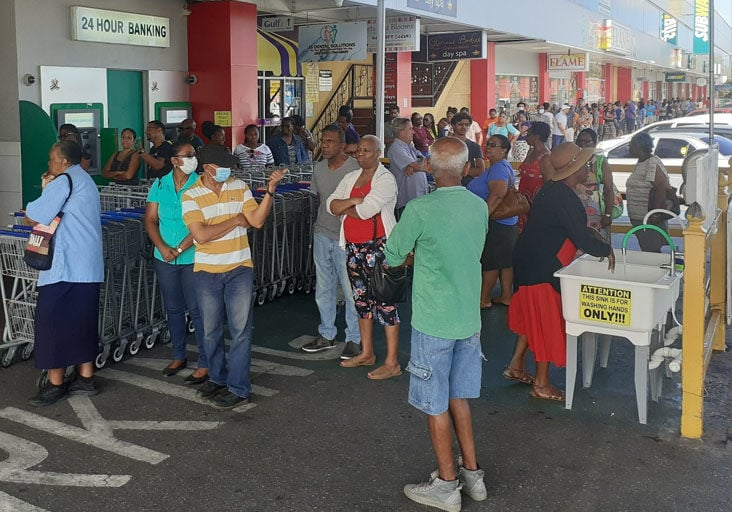 Shoppers await the opening of Xtra Foods on O'meara Road, Arima yesterday. Following Thursday’s announcement that only esential services will remain open after midnight tomorrow, shoppers nationwide went into panic mood, despite groceries being on the list of esential services. —Photo: CURTIS CHASE 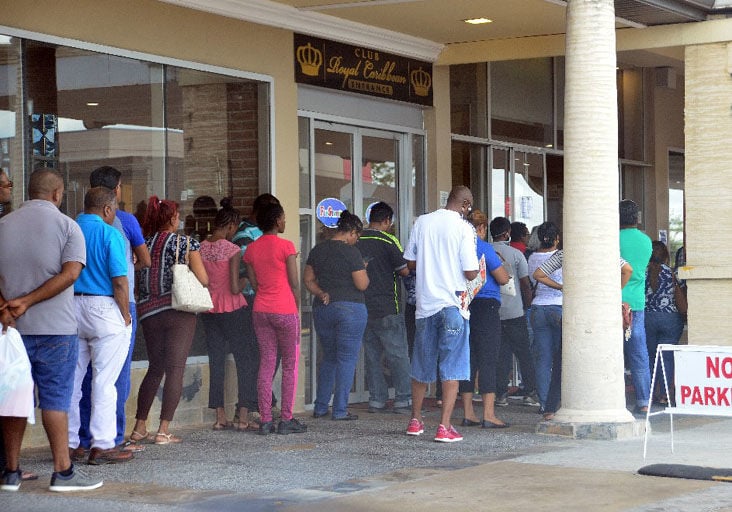 push their grocery carts outside PriceSmart in

Shoppers await the opening of Xtra Foods on O'meara Road, Arima yesterday. Following Thursday’s announcement that only esential services will remain open after midnight tomorrow, shoppers nationwide went into panic mood, despite groceries being on the list of esential services. —Photo: CURTIS CHASE

SHOPPERS flooded supermarkets across the country yesterday to stock up before hunkering down from midnight tomorrow.

President of the Super­markets Association of T&T Rajiv Diptee des­cribed it as a “mad dash” to get items off the shelves.

He told the Express, “Shop­pers were buying rice, sugar, flour, cheese, bottled water and snacks. “There is no need to panic buy.

“People need to understand, su­permarkets are considered an essen­tial business. We will be open throughout the period (stipulated by Government) up to April 15, and beyond.”

Government announced on Thursday that in an effort to reduce the spread of COVID-19, non-essential services would be shut down until April 15.

Diptee said supermarkets across Trinidad and Tobago saw a tremendous increase in customers yesterday, resulting in long lines at cashiers.

He said, “I am also con­cerned for the safety of customers. People in their panic to buy are not respecting the guidelines. They are not practising the three-feet distancing nor social distancing.

“People are shopping out of fear right now. They probably think by Monday, they would not be allowed to drive their cars to the super­markets, which is not the case.”

Diptee said while there are no shortages at this time, he is concerned the large volume of items being cleared from the shelves can cause it.

He said, “It is a situation I think the Government really needs to provide more information as soon as possible to give a sense of calm.”

Diptee said while there has been an increase in shoppers during this crisis, the supermarkets will maintain normal business hours.

‘One time I agree with PM’

At JTA Supermarket in San Fernando yesterday, there were long lines as shoppers waited to get access to the store.

It was a similar situation at Xtra Foods in Chaguanas and Grand Bazaar, as well as PriceSmart in Port of Spain and Chaguanas.

JTA customer Andrew Sampson said, “I think that is the best thing (Prime Minister Dr Keith) Rowley could do. I am not mad at him.

“If people look at Italy and other countries that took it for granted...look at the amount of deaths which have resulted because of it. This is one time I will have to agree with the Prime Minister, he has to be strict with this.”

He said, “I am asthmatic and my daughter suffers with seizures, so right now I am very cautious. I have limited my movements; it’s just home to work and back. I am still getting her medicine at the hospital, so I hope as the country continues to battle with this.”

Sampson, who lives in San Fernando and works at the hospital, said, “I think they should also show people on television how to correctly wash their hands. People also need to be educated on the type of hand sanitiser they should use.”

Another shopper said, “I think it is a good move by the Prime Minister. People are still on the outside socialising and gathering at places that are non-essential. I think shutting down all the non-essential places would hopefully keep people more indoors.

“I think for everyone, just keeping yourself and your family safe should be your top priority. With the kids home all day, they are eating more, so the food bill is going up. If you have your parents staying with you, then you have more mouths to feed. I would say my food bill has almost doubled.”

“My food bill has gone up by a lot. The kitchen is open 24/7,” said another shopper.

What this little microbe is doing to us

THIS virus is frightening. It is spread by human-to-human contact, forcing us into isolation. It is spread in the air, which forces us to practise “social distancing”. It practises age discrimination: the elderly are dying at a rate phenomenally higher than the young.

Stopped by cops, drunk driver hops into back seat

FIVE years after journalist and activist Marcia Henville was murdered, her 25-year-old son I…

No appointment, no business

THERE was confusion yes­ter­day at Licensing offices around the country, with dozens of peop…

'Throw them in jail?' - How to deal with mask resisters