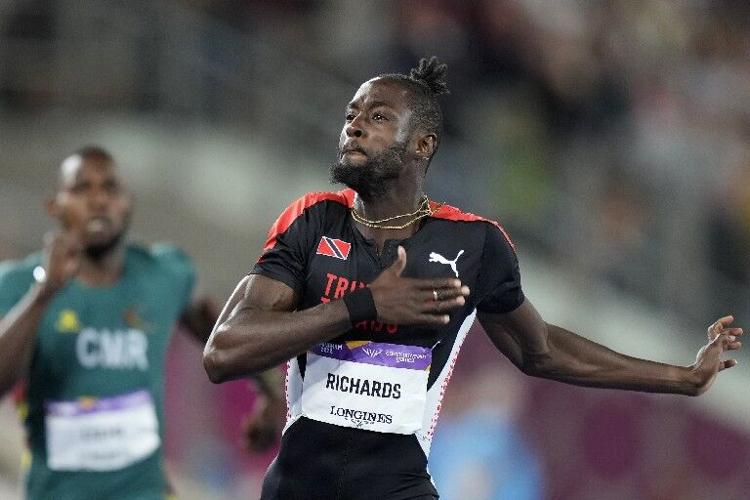 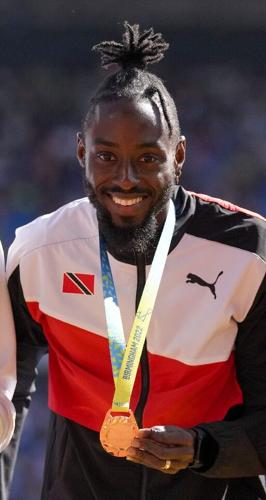 Commonwealth Games 200 metres gold medallist Jereem “The Dream” Richards is a man on a mission. And, according to his sister Brittney Richards-Nelson, that mission is being fulfilled.

Richards jump-started his 2022 season with a golden performance in the men’s 400m at the IAAF World Indoor Championships held in Belgrade, Serbia.

He stopped the clock at 45.00 seconds to not only set a new championship record, eclipsing the 45.11s set in 2012 by Nery Brenes of Costa Rica, but also established a new national record, erasing the 45.05s set by Deon Lendore.

Richards’ next major assignment was a sixth-place finish in the 200m final at last month’s World Athletics Championship in Eugene, Oregon. His clocking was 20.08 seconds.

However, on Saturday he scaled the heights once more to successfully defend his 2022 Commonwealth Games 200m title, setting a new Games record and new personal best of 19.80 seconds.

Not finished yet, he returned on Sunday’s closing day of the Games to team up with Dwight St Hillaire, Asa Guevara and Machel Cedenio, anchoring Trinidad and Tobago to men’s 4x400m relay gold in three minutes, 01.29 seconds.

The Express yesterday spoke with Richards-Nelson about her brother’s 200m Commonwealth Games victory and his mission.

She said his season did not have the type of preparation he would have liked due the disruptions of the Covid-19 pandemic.

“There were times he would return to Trinidad for a couple of weeks but ended up being here for some months. That in itself would have been a challenge because it meant it would have interrupted his training schedule and he would have no access to a training facility whilst he was here as all the stadiums were closed,” Richards-Nelson said.

She noted that Richards would train outside in the road and around the house.

“So, it was a bit challenging but he had a mission in mind and he would have kept that at heart. So throughout his activities, though it was not under the usual circumstances, he was still very persistent and determined to ensure he maintained his fitness and to also ensure that he kept his body ready for whenever competition would restart,” she said.

Asked what Richards’ goals were for last month’s World Championships, Richards-Nelson said he definitely wanted to medal in the 200 metres but had to settle for sixth.

Speaking on his goals and attitude going into the Commonwealth Games, she said his goal was definitely to retain his title.

“His attitude is one of he’s always going to try and do his best. He will try to control the things that are within his control and he would always put his best foot forward. At the end of the day there are certain things that would be outside of what you can control but the only thing you’re responsible for is your health, so that’s basically his attitude. He went in there to do his best, to give his best and that’s what he did,” she added.

Asked what was the mood back home among his family during Saturday’s 200m final, Richards-Nelson told the Express it was a bit different this time around but just as exciting as always.

“We usually gather and watch the race together but unfortunately this time we weren’t able to. Everyone would have looked at it separately but we have a family chat where we communicate regularly, always talking with each other. My mom is not in the country right now but she would have watched it. I watched it with my husband and daughter, while my aunts and uncles also looked at it. Everybody was in separate locations but because they’re on the chat it was like we were all together.

“We were very excited. We knew that he went into first rounds and the semi-final very conservative, he didn’t want to push too much. You know you don’t want to use all your energy in a semi-final or in a preliminary round but you still want to secure a good lane, you still want to go in with a good time. So, he would have been a bit conservative and he did a reasonable time in both. I think in both, the prelims and the semis, he had the second fastest time with Zharnel Hughes of England having the fastest time in both.

But when it was time for the finals now we know that he’s going to release it this round, so we were really excited to see it. We had no doubt that he would retain but again it a race and anything could happen in a race. So while we know he has the ability we always continue to pray and cover him and ask God to take him through because at the end of the day God has the final say.

“It was just so exhilarating looking at him take it to the finish line. It was just totally amazing. Though we were separate, everybody in the chat as soon as the race was over we had it going like if it was a party and we were all together.”

Richards-Nelson said Richards’ achievements mean a lot to his family and the people of Point Fortin.

“His achievements mean a lot to us his immediate family because we know all the challenges that he would have faced coming up, all the hurdles he would have encountered and persevered through. To us it’s just amazing seeing your relative work hard towards something and achieve it.

‘More women being killed or injured due to gang links’

Forty-four women have been killed so far this year.

This year alone, Energy Minister Stuart Young made six trips to Washington, DC, and he is ma…

Price of gas too high?

PRIME MINISTER, Dr Keith Rowley came out swinging on Friday night addressing a captive audience at the Mt Hope/Mt Lambert community centre as he responded to the Opposition’s, “bad news and bile,” critique of the 2022-2023 budget.

A Cabinet out of touch with reality.