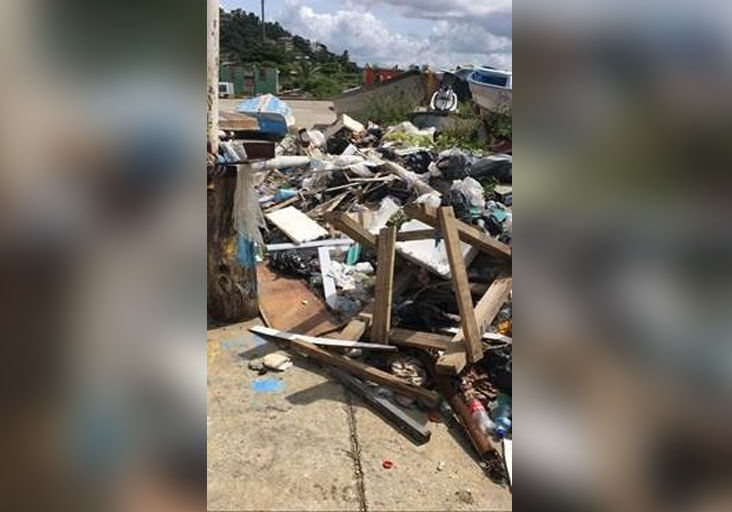 Piles of Garbage behind the Carenage Fish Market in Carenage. 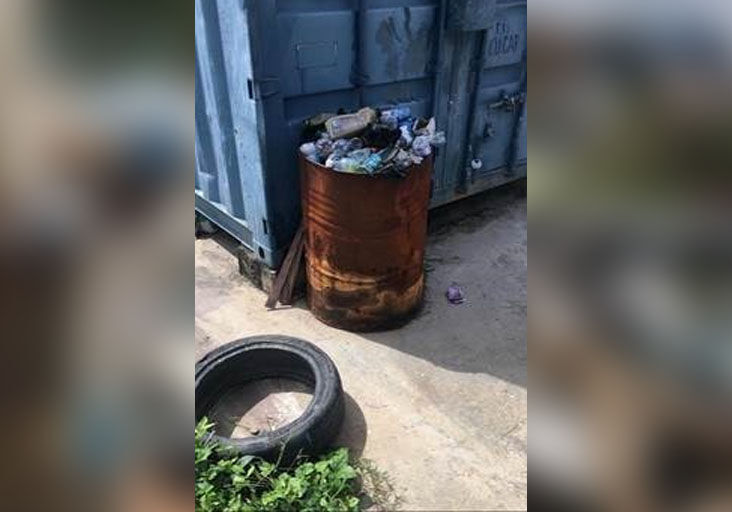 Barrel used to dispose of refuse outside the Carenage Fish Market. 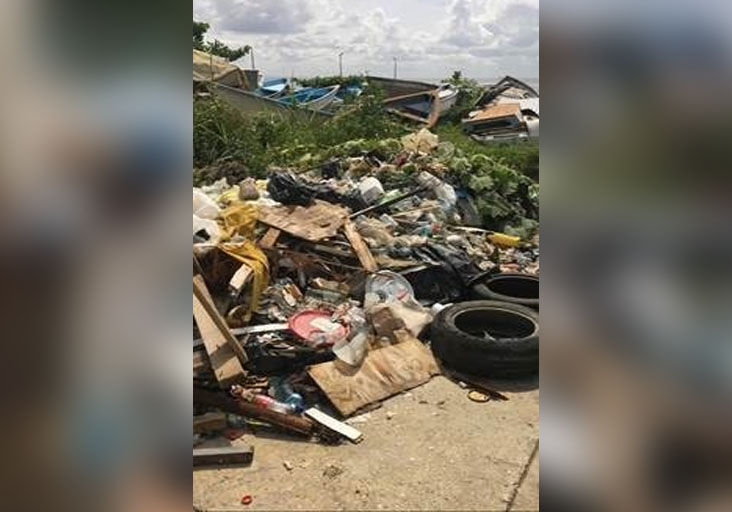 UNSIGHTLY: Piles of garbage, above and below, behind the Carenage Fish Market.

Piles of Garbage behind the Carenage Fish Market in Carenage.

Barrel used to dispose of refuse outside the Carenage Fish Market.

UNSIGHTLY: Piles of garbage, above and below, behind the Carenage Fish Market.

A pile of debris grows daily behind the Carenage Fish Market, where fisherfolk say they have been ignored and neglected by management for at least one year.

Discarded wooden frames and heaps of plastic waste and refuse have carpeted parts of the facility’s exterior since its opening in 2018, according to a fisherfolk representative who spoke to the Express in November on behalf of those housed at the market.

The representative, who asked not to be identified, said that the $28 million facility has been faced by a number of problems throughout the years. But the lack of garbage disposal methods and storage has resulted in the ever-growing pile that has been ignored by the market’s management.

In lieu of larger commercial bins, the representative said that the facility is instead lined with empty barrels for disposal. And fishermen, they added, often had no choice but to dispose of larger quantities of waste by adding to the pile.

“There are no garbage bins on the compound for when the fishermen do any work with their boats, everything is dumped on this big pile of rubbish in the back. It’s like the fish market is pretty from the front and a disaster in the back. The issue with the garbage is supposed to fall under whoever is running the compound,” said the representative.

“To begin, they can’t have this compound and not have proper disposals. There is nothing, not a big commercial bin to put things in, everything is just in a pile. It’s been there since last year. It’s all kinds of old boats and old garbage. If anyone does any kind of work, it remains there. There are barrels that we dispose of the smaller trash in but it simply is not enough for the volume of things we have to dispose of.”

The facility currently falls within the remit of the Caribbean Fisheries Training and Development Institute (CFTDI) and the Urban Development Corporation of Trinidad and Tobago (UDeCOTT). According to the representative, the issue of disposal has been brought before both bodies on multiple occasions. However, to date, nothing has been done to address it.

“Everything is out of control. It’s like right now, the fisherfolks have an association...within that association, the CFTDI runs the fish market with UDeCOTT. On one hand, you hear UDeCOTT has to deal with it and then the CFTDI. CFTDI is saying their hands are tied because of UDeCOTT and UDeCOTT is saying it is CFTDI that is responsible for certain things. Before they came in there was a big bin in front. When they started doing the work and finishing off the market, that was removed,” they said.

And in addition to this issue, they said, fishermen housed at the facility now feel as though it does not serve their interests. Overcrowding of boats, a lack of security, and limited opening hours are only some of the concerns listed by the representative.

“Nothing is in place for the fishermen in the back. It is a pretty fish market; come buy fish and go, but in terms of the functioning, nothing is really in place. Right now, they have 100 boats but no facilities to house the number of boats here. If we were to have a disaster to pull up boats in the water, we can’t do that.

“There are boats outside and people from outside are bringing their boats. Some boats are being damaged and there is not even compensation when boats are damaged from overcrowding. The sea needs dredging, you file certain complaints and people think it’s a nag but it’s not, a fishing boat costs money. There’s no type of security, the security just guards the gate. We must come back early in the morning to see that our boats are safe. They care about the ambience but not the functioning. We feel as though the building was not built for the fishermen but for their uses,” they said.

Apart from this, many are still awaiting compensation for a fire that destroyed the old market in 2015.

“We have been going back and forth with the minister asking for compensation because some fishermen were taken down really badly and lost everything in that fire. We have a lot of runaround with the ministry. Now that the new fish market is there, they want these same fishermen to pay a fee.

“Now they are coming out with a fish fry next to the fish market. It seems like they are seeing about the fish fry and still no consent from the fishermen. It is not just the garbage, it’s a lot of things,” said the representative.

The Express contacted CFTDI to ask about its role in maintenance of the fish market. The Express asked about the installation of commercial disposal bins and the claims of overcrowding and security issues raised by the fisherfolk.

In an e-mail response to the Express last week Monday, CFTDI said it did not have operational authority to deal with the issues raised. It said these issues were raised with UDeCOTT for action.

“The Caribbean Fisheries Training and Development Institute is happy to address these concerns to the best of our ability. CFTDI is located on the Western Main Road and First Avenue South, Chaguaramas, respectively, and was established by charter in 1974 for the purposes of training stakeholders, locally and regionally, for opportunities in the marine and maritime sectors.

“CFTDI was given operational control and management of the fish retail vending stalls, washroom facilities, and fisherfolk lockers at the Carenage Fishing Centre. The Institute has met with and worked alongside the membership of the Carenage Fisherfolk Association during the past three years resolving issues within our remit. With this being said, CFTDI does not have the operational authority to address the issues raised and we, like the Carenage fisherfolk, would have to raise issues and concerns with the Urban Development Corporation of Trinidad and Tobago Ltd for action on those issues and concerns,” said CFTDI.

The Express attempted on multiple occasions to get a response from UDeCOTT via e-mail and telephone.

The following questions were asked:

— Is the removal of garbage on site the responsibility of UDeCOTT or CFTDI?

— Would the introduction of larger commercial bins and more frequent garbage collection be considered by either group?

— Why were such elements (bins/collection) excluded from the current operations of the fish market?

— Is the overcrowding of boats an issue at the facility that is currently being addressed?

— Is compensation for the fire that destroyed fishermen’s equipment in 2015 being considered?

— Is there any response to the other claims made by the fishermen, including security issues and neglect?

However, to date, no response has been received.