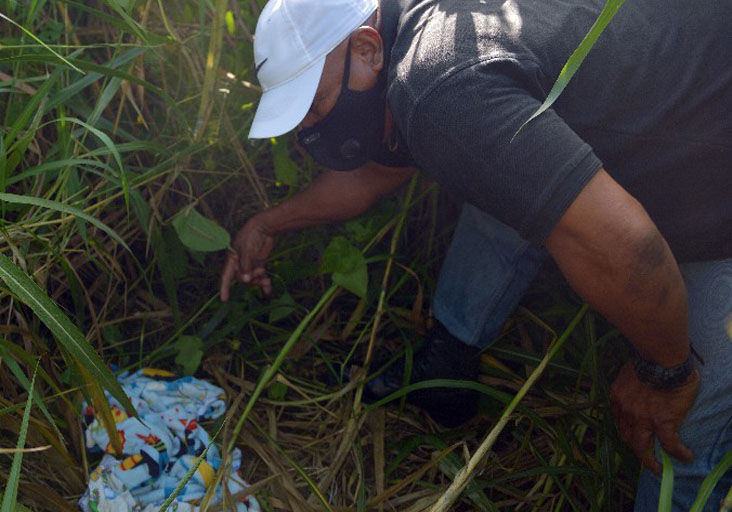 FOUND IN THE BUSHES: Freeport resident Tony Alexander points to the baby blanket and clothing left in bushes behind a bus stop at Beaucarro Road in Freeport, where a newborn baby was found yesterday. —Photos: DEXTER PHILIP 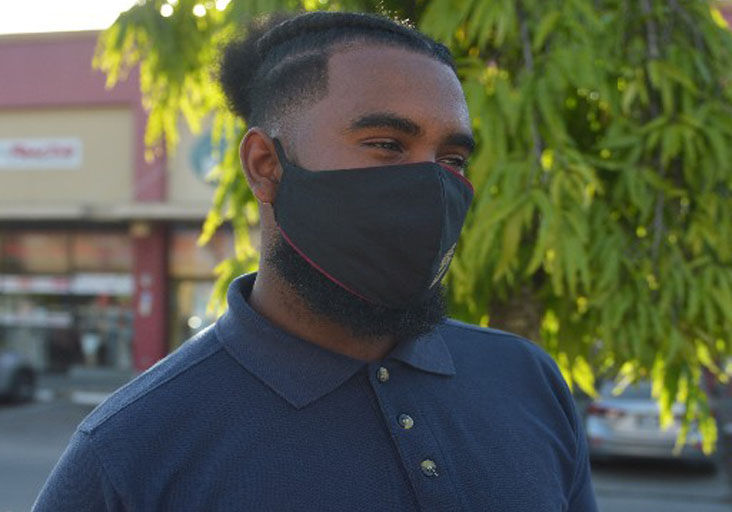 ‘Traumatised’: Steven Redhead, an employee at Toymart at Price Plaza, Chaguanas, explains how he and his brother found the abandoned baby girl in the bushes behind a bus stop at Beaucarro Road in Freeport yesterday.

FOUND IN THE BUSHES: Freeport resident Tony Alexander points to the baby blanket and clothing left in bushes behind a bus stop at Beaucarro Road in Freeport, where a newborn baby was found yesterday. —Photos: DEXTER PHILIP

‘Traumatised’: Steven Redhead, an employee at Toymart at Price Plaza, Chaguanas, explains how he and his brother found the abandoned baby girl in the bushes behind a bus stop at Beaucarro Road in Freeport yesterday.

A man walking along the road near the junction of Old Southern Main Road and Beaucarro Road in Freeport is the accidental angel who has rescued a baby Jane Doe.

Steven Redhead, 21, of Beaucarro Road, heard the infant’s cries and followed a beaten-down path into the bushes behind a PTSC bus stop around 9.50 a.m. yesterday.

Redhead found the infant lying on her back, on a mat of dried grass, behind a clump of bushes.

The baby, who appeared to be only weeks old, was wearing a pink and blue matching onesie and booties.

“I heard a cry, and at first I thought it was a kitten in the bushes. But I still decided to take a look and I followed the crying. I walked in and at first, I saw a blue blanket, then I saw the baby. The baby was on her back. She was crying softly. There were ants in her mouth,” he told the Express.

“At first I really couldn’t move. I did not know what to do. I was shaking and traumatised,” said Redhead. “I followed the cries into the bush—it was a very soft cry. But when I saw the baby, I was totally shocked.”

He called out to his brother, Reynaldo, who was standing a few metres away, awaiting transportation to go to work in Chaguanas.

Redhead said they did not touch the baby, but he and his brother contacted police.

The paramedics took the baby to the Couva Health Facility and the infant girl was later transferred by ambulance to the San Fernando General Hospital and placed in the pediatric ward.

The baby was found on the eve of World Children’s Day, which is being observed today.

Investigators are now searching for the parents of the infant, and are seeking to obtain CCTV footage from nearby businesses to assist in identifying the person/s who abandoned the child.

Member of Parliament for Couva South Rudranath Indarsingh said he was saddened to learn of the incident, but was relieved the baby was found alive and in relatively good health.

He said he had started liaising with Beaucarro residents to assist police in locating the parents of the infant.

“I am very saddened and concerned as to why this baby was made to suffer like this? Was it out of frustration, domestic issues, unemployment, social support/counselling, or parents were unable to support this child?” Indarsingh asked.

He said he has contacted the Minister of Social Development and Family Services Donna Cox and Minister and Minister in the Office of the Prime Minister Ayanna Webster-Roy to render assistance to the baby girl’s relatives when they are found.

Indarsingh said he also hoped to get the intervention of the Children’s Authority “so that we can stabilise this child’s life and family”.