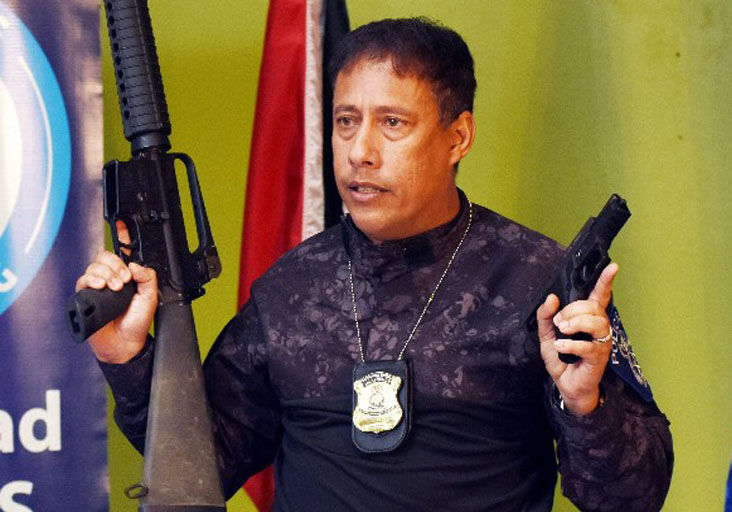 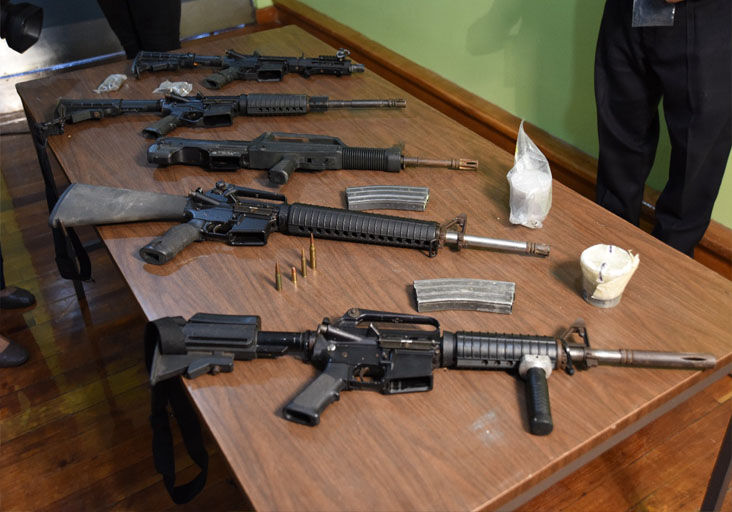 Contraband: High-powered rifles seized by members of the Police Service, on display at Police Administration Building, Port of Spain, back in May.

Contraband: High-powered rifles seized by members of the Police Service, on display at Police Administration Building, Port of Spain, back in May.

Over the past five years, there have been 2,778 murders in Trinidad and Tobago.

Around 80 per cent of these deaths—­accounting for an alarming 2,178 people—were firearm-related.

Trinidad and Tobago does not manufacture firearms, nor does it import guns for commercial use in any serious way.

So why are so many killed by guns in this country?

And what is being done to combat the prevalence of firearms?

The Trinidad and Tobago Police Service (TTPS) says it has ramped up efforts to remove weapons from the hands of criminals.

Police data indicates that the number of guns seized appears to be roughly twice the number of firearm-related murders for particular years.

That year 765 firearms were seized.

That year, 1,064 firearms were seized from the streets—the highest number of guns recovered by the Police Service.

That year, while the number of firearms seized fell, the decline was less than eight per cent as the number stood at 988 guns seized by the end of 2018.

In 2019, murders continued to climb, reaching 538–the second highest murder toll in the history of Trinidad and Tobago.

Last year, 80.5 per cent of the homicides recorded were committed through the use of firearms, with 433 such reports.

A total of 888 firearms were seized in 2019—a significant drop from 2017, but still the third highest over the five-year period.

In 2020, Trinidad and Tobago joined the world in the fight against the Covid-19 pandemic.

For the year, serious reports of crime have dropped by about 20 per cent across the country.

This is reflected in the homicide toll of 344 as at October 31.

The comparative figure for the same period last year was 443 — 99 fewer.

But while many countries have reported an increase in serious crimes, this year, local data from police suggests a decrease in certain serious crimes; or at least in the reporting of crimes to police.

In that same eight-month period there were 112 kidnappings, with 13 people being kidnapped for ransom.

This was decrease of 46 per cent, when compared to 2019, according to police data obtained by the Sunday Express.

Cases have decreased by 53 per cent this year, with a total of 195 reports as the last month of 2020 draws nearer.

Commissioner of Police Gary Griffith noted that while the number of firearms seized on an annual basis has gone down since 2017, attention needs to be paid to the types of weapons being seized.

“If one is just looking at the numbers, people may see that the number of firearms seized by the Police Service over the last three years has decreased. But this alone does not paint the whole picture. You have to go into the details because there you would see that weapons we currently seize almost every day are not the handheld guns from a decade ago, but fully automatic weapons—assault rifles and Uzis. Weapons capable of claiming multiple casualties, weapons of war,” Griffith told the Sunday Express yesterday.

These weapons, Griffith said, are resulting in a higher number of homicides.

“The number of victims who survive attacks has now decreased. And it’s not because gunmen are now suddenly sharpshooters but rather that the type of ammunition and weapons being used right now, with 5.56mm rounds, which are designed to kill. And all you have to do is look at the number of woundings and reports over the last few years. They have been decreasing almost every year. Yes, the police have been doing fantastic work in removing guns from the streets, but this is also because the likelihood of survival is now far less,” Griffith said.

The Sunday Express was told that in 2015, there were 600 reports of woundings and shootings in a year that saw 410 murders.

That number dipped slightly the following year to 522, while murders increased to 463.

The number of shootings and woundings increased to 718 in 2017, while murders climbed to 494.

The number of woundings continued to drop with 607 reports in 2019—the year that Trinidad and Tobago recorded its second highest murder toll of 538.

“So, with this backdrop, this is why I get so upset when I see politicians who are drafting laws, emphasise that persons held with assault rifles have to get bail. These are weapons of war. These are weapons that are capable of killing 50-odd persons with one clip. It is only through the grace of God that we have not seen a similar situation in Trinidad and Tobago. So that emphasis of a right to bail in these circumstances, because you held them before they could use the weapon, that I cannot understand.

“That’s like finding someone building a bomb but because he has not finished the bomb, you decide he ought to be released on his own bond. What would you expect him to now do with his freedom?” Griffith argued.