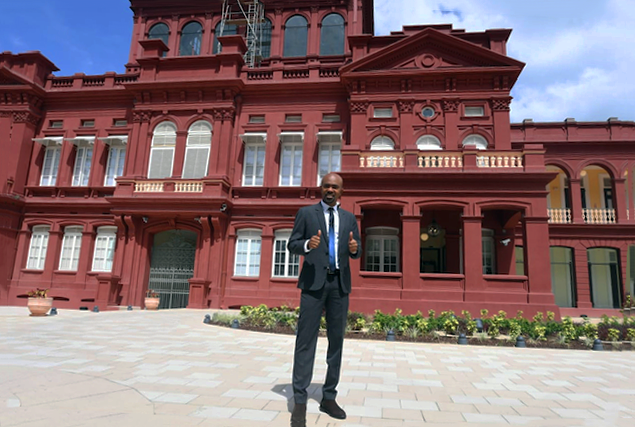 Jason Williams, alias JW, well known for his “Palance” partnership with Ancil “Blaze” Isaac, is entering the political arena. Williams gives thumbs-up in front of the Red House on Tuesday before his official swearing in as a Government Senator. 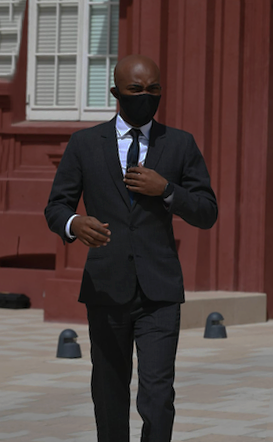 In 2010, Williams, also a radio personality, and his colleague/television personality “Blaze” both became household names with the hit song “Palance” with which they copped the coveted Road March title.

“I am very humbled and excited to learn the process. I am going in with my eyes wide open,” he told the Express yesterday after the Prime Minister announced Williams had been chosen as a senator to replace former public utilities minister Robert Le Hunte.

In a telephone interview, Williams, who was on a walkabout yesterday, added: “I got the call from the Office of the Prime Minister before 8 a.m. this morning. I was up but the call got me straight up.

“I called my mom (June Williams) first and shared the good news. I am looking forward to my swearing-in ceremony today (Tuesday).”

Asked about Le Hunte’s resignation, Williams said: “I have no comment. I am new. I joined the party in early 2020.”

In an interview after he was chosen as the candidate for Barataria/San Juan in the 2020 general election, Williams said he used the Covid-19 period to reflect and cement his decision to enter politics.

Asked about his political decision, Williams said: “Covid-19 created the space and platform for me to make the decision. My life has been busy as a bee, hosting an event or attending an event. I am going in brave to serve my country.”

Williams added: “I have always been passionate about politics. I was a politician before I really got into it.

“I was careful how I conducted myself. I tried to do stuff that would not bring my character into disrepute.

“Once given the opportunity to serve, I will be listening intently. I really want to understand the burgesses’ needs and concerns and collaborate with the (San Juan Regional) Corporation. I am about building relationships and merging untapped dynamism and resources.”

JW is a Senator: Hinds gets the Public Utilities Ministry

Newly appointed PNM Senator Jason Williams, also know as “JW”, had his first brush with parliamentary protocol on Tuesday, when House Speaker Christine Kangaloo put him out of the Senate for ten minutes.

Sixty-one-year-old Joanne Pantin, who has been stranded in Florida, says she is heartbroken over comments made by Prime Minister Dr Keith Rowley and her son, Stephen Nicholas Pantin.

In a telephone interview with the Express yesterday, Pantin said she had a meltdown when she learned that the Government had agreed to host the 2020 edition of the Caribbean Premier League (CPL) and allow players to come to Trinidad.

Anti-Christopher Columbus lobbyists are happy Prime Minister Dr Keith Rowley has finally chimed in the conversation over the removal of the statue.

While speaking at the opening of the Bagatelle Community Centre last week, Rowley said after the August 10 election there should be a “sane and sober” national conversation on what colonial statues and monuments should come down.

Bar owners: Give us CPL ‘timing’

WITH the early closure of bars imposed by the Government and Caribbean Premier League (CPL) games beginning on August 18, the Barkeepers Association is calling for the 8 p.m. lock-off time to be lifted before the CPL bowls off, as the early closure will further hit their earnings.

Bandit tells court: 'I lost my job, I was desperate'

HAVING become financially desperate after losing his job, a Tunapuna man, who resorted to a …