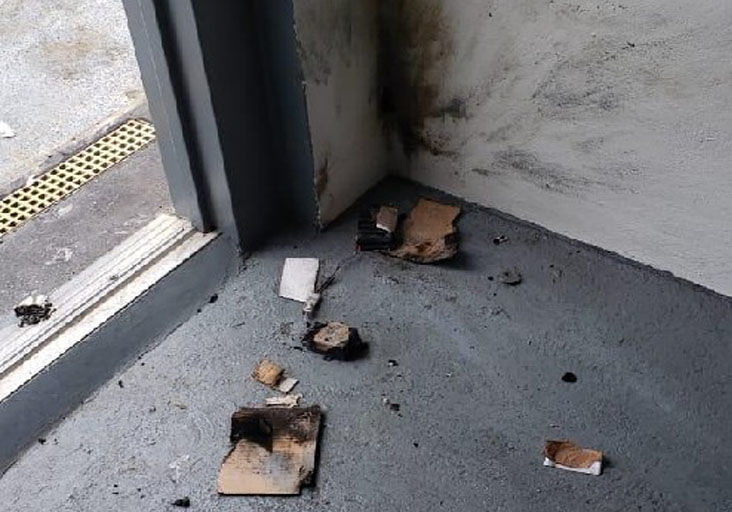 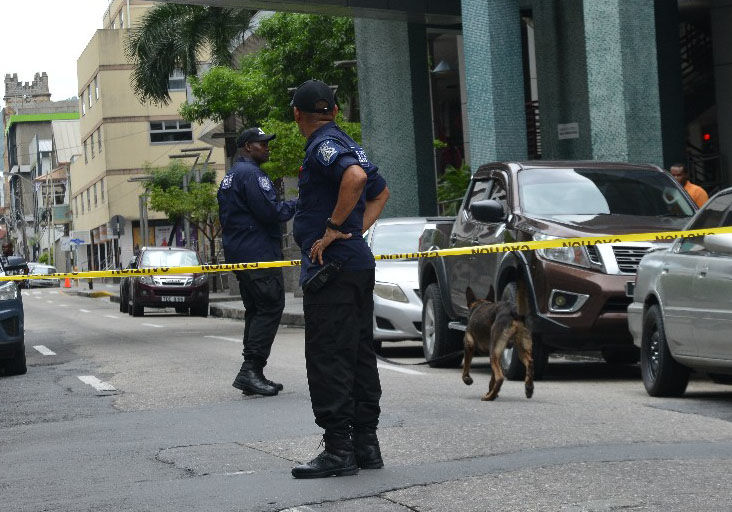 An officer uses a bomb sniffer dog near the Government Campus Plaza, Parkade on Edward Street, Port of Spain after a device exploded in the multi-use facility yesterday morning. Photo: JERMAINE CRUICKSHANK 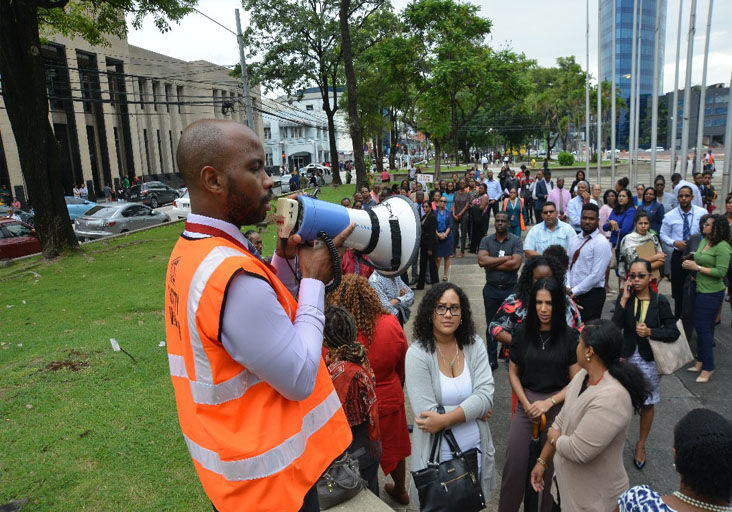 MUSTER POINT: Government and private company employees assemble on the Brian Lara Promenade, Port of Spain, after they were evacuated from their offices following an explosion at the Government Campus Plaza Parkade in Port of Spain yesterday.—Photo: JERMAINE CRUICKSHANK 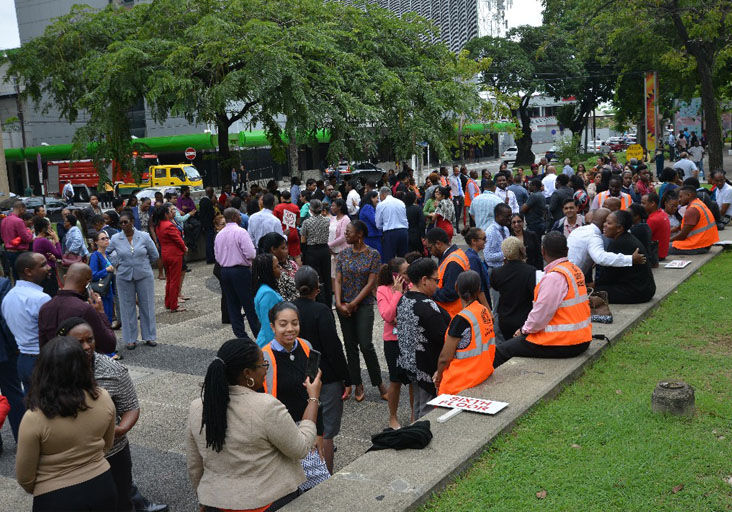 An officer uses a bomb sniffer dog near the Government Campus Plaza, Parkade on Edward Street, Port of Spain after a device exploded in the multi-use facility yesterday morning. Photo: JERMAINE CRUICKSHANK

MUSTER POINT: Government and private company employees assemble on the Brian Lara Promenade, Port of Spain, after they were evacuated from their offices following an explosion at the Government Campus Plaza Parkade in Port of Spain yesterday.—Photo: JERMAINE CRUICKSHANK

WHAT started as a normal day for businesses and Government ministries in Port of Spain yesterday, turned into a mass evacuation following an explosion at the Parkade. Around 8 a.m., employees were evacuated to a muster point along the Brian Lara Promenade.

There they stayed for over two hours.

Those conducting business in the capital city were advised against venturing near the area.

“If in the area, please follow the instructions of security personnel. If possible, stay away from the area or use alternative routes,” the Ministry of Communication urged in a media release at 1.44 p.m.

Among the buildings evacuated was the Unit Trust Corporation, located metres away from the Parkade.

UTC executive director Nigel Edwards, who waited with staff along the Promenade, told the Express that around 11.39 a.m. the corporation’s head of security confirmed that there was a report of an explosion at the Parkade.

“At 11.40, we triggered the fire alarm and came outside. We do have a fairly rigorous evacuation protocol so in ten minutes we were at our muster point, and we were liaising constantly with the security forces,” he said.

“We were told that our building was inside the blast zone and to clear all personnel, not just the employees, but also security,” he added.

Edwards lauded officers of the Fire Services for their professionalism.

“They continued to have a very active liaison with us throughout. They kept giving us updates as to the estimated time to sweep the carpark area. As far as I understand, nobody has been injured and we’re just thankful for that,” he said.

At 1.50 p.m. police gave all employees the all-clear to return to their respective offices and to retrieve their vehicles from the Parkade.

With over two hours of the business day lost and customers inconvenienced, Edwards said business hours would have been extended by 30 minutes.

Instead of closing at 2.30 p.m., the UTC closed at 3 p.m. to accommodate affected customers.

“Our customers would have had to be out here for more than two hours. It’s regrettable, but safety comes first,” he said.

While they waited to re-enter the compound, UTC staff were provided with food and drink.

“We have to be very sensitive to the reality of the staff. This happened 20 minutes before their lunch time. We had to be on standby to be able to go back into the building at any point, when given the all-clear.

“We couldn’t allow any of our staff to leave so we had to try and find the best way possible to accommodate them and make them as comfortable as we could. So they got some water and got a little nourishment in the meantime,” Edwards said.

Asked to comment on the incident yesterday, president of the Downtown Owners and Merchants Association (DOMA) Gregory Aboud said because of a lack of sufficient information, he could not comment.

But he described the “episode” as “very disruptive” to Port of Spain.

“It was very disruptive to the traffic. And while we do not want to err on the wrong side of public safety, we would like to mention that these sorts of episodes create a negative image of our country and we should be cautious about how we sensationalise events such as these,” he stated.