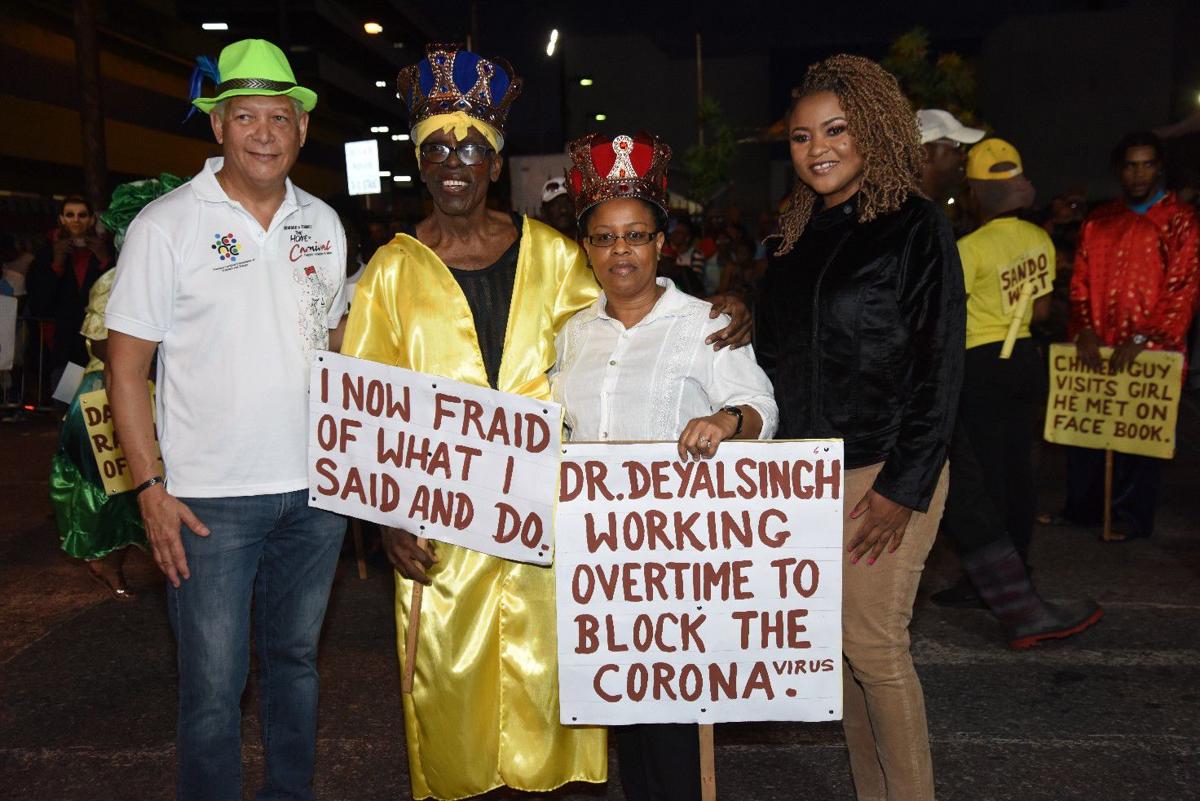 KING AND Queen: Father and daughter combination of Herbert and Lillan Pierre who were Ole Mas King and Queen respectively are flanked by Mayor Joel Martinez and Culture Minister Nyan Gadsby Dolly yesterday at South Quay, Port of Spain. 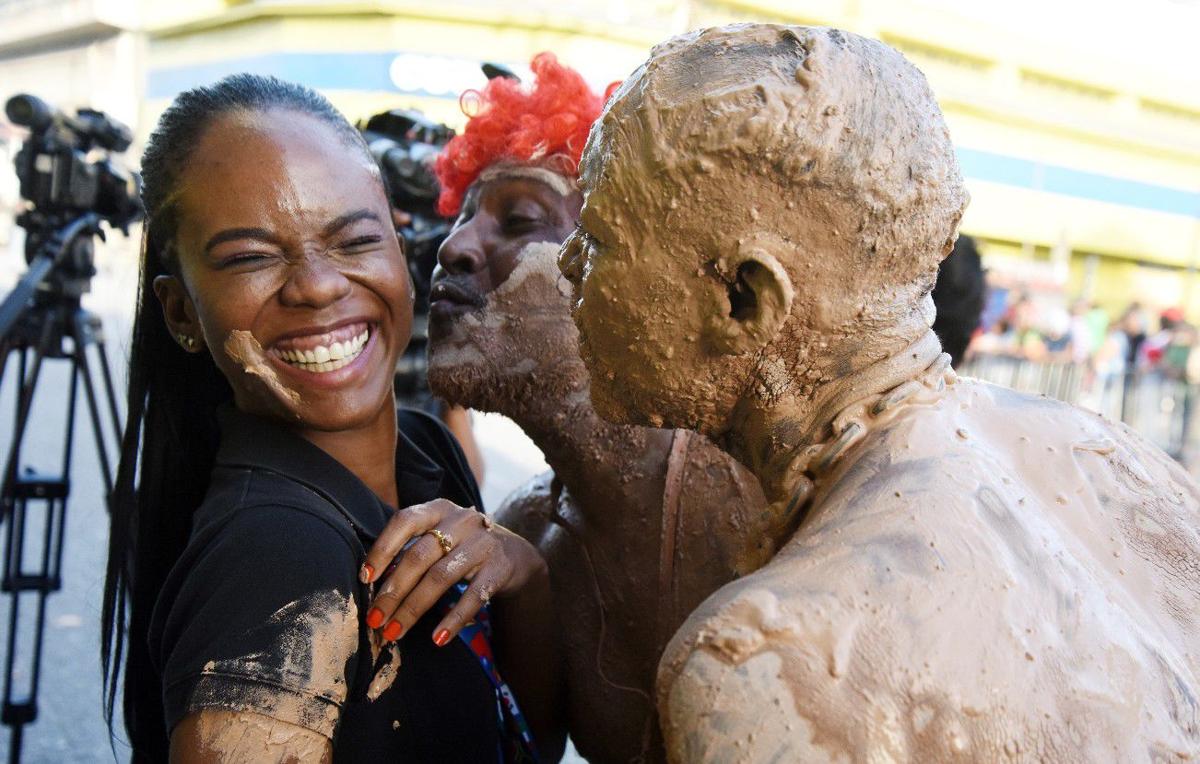 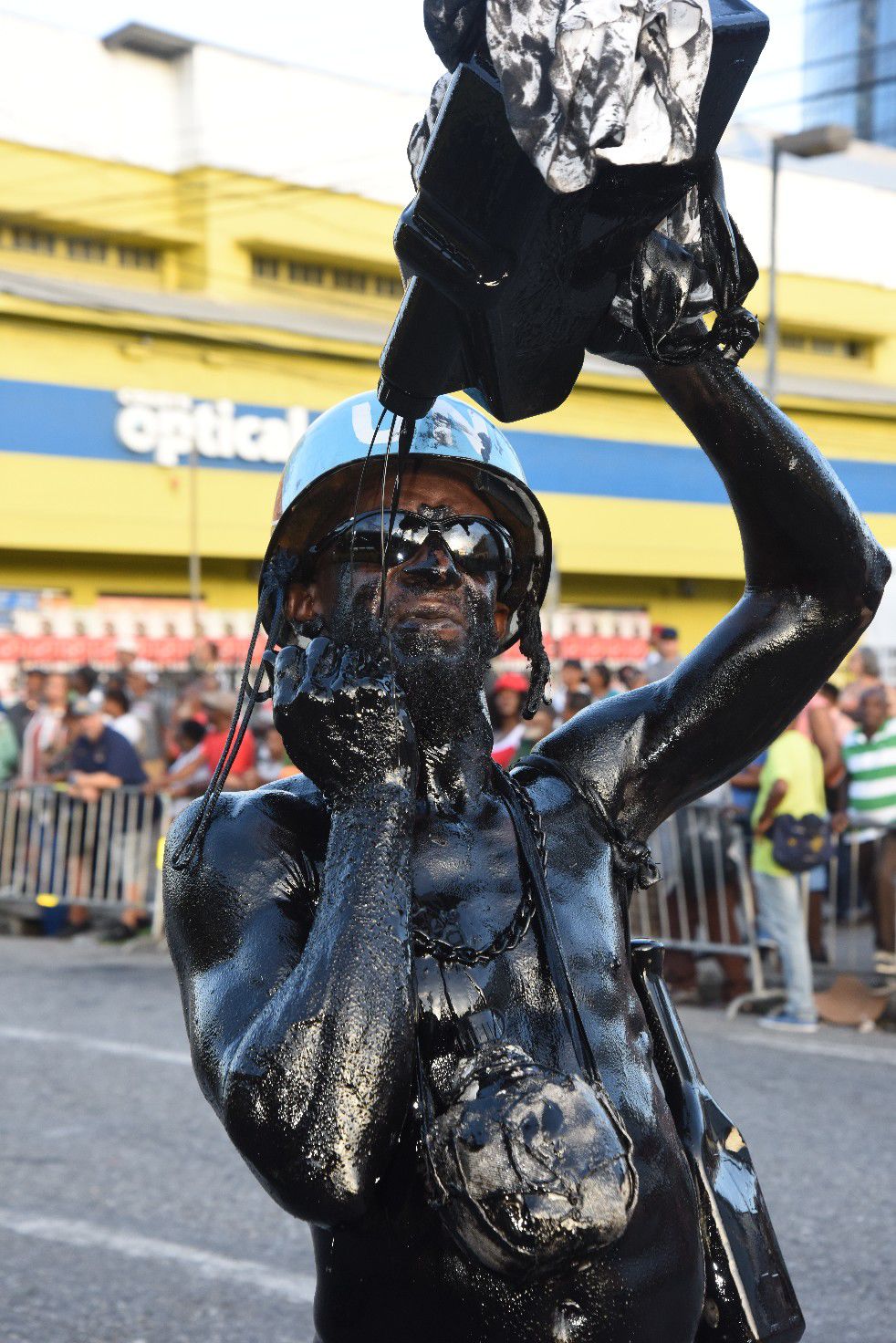 BATH TIME: A reveller pours oil on himself during yesterday’s Jouvert celebrations on South Quay, Port of Spain.

KING AND Queen: Father and daughter combination of Herbert and Lillan Pierre who were Ole Mas King and Queen respectively are flanked by Mayor Joel Martinez and Culture Minister Nyan Gadsby Dolly yesterday at South Quay, Port of Spain.

BATH TIME: A reveller pours oil on himself during yesterday’s Jouvert celebrations on South Quay, Port of Spain.

The Pierres have done it again. Herbert Pierre and his daughter Lillan Pierre are the 2020 King and Queen of Jouvert. They were crowned during yesterday’s Jouvert celebrations at the downtown Port of Spain judging point at the Lord Kitchener Stand, South Quay. A total of 25 individuals, six of whom came from the Pierre family, put a humorous spin on topics, focusing on politics and social commentary.

The Pierres have dominated the competition for over a decade with the patriarch as the mastermind behind each of the portrayals. Herbert Pierre hinted that he may retire this year. He turns 76 in three days time. The win is his second king title although he has had 12 kings to the family name and ten queens.

“We have 12 queens and ten kings. This is my second king. I was not to play today but my grandson was not feeling well and he felt he might not have done a good portrayal so I substituted for him. I told them I want to give other people a chance next year to win, but they don’t want me to leave. It is such a beautiful thing. I think that my creativity is just for this kind of thing. The kids enjoy it but I am studying to take a rest next year but nobody don’t want me to resign. I am 76 on Thursday,” Pierre said.

Herbert Pierre wanted to show through portrayal, that former prime minister Kamla Persad-Bissessar’s words are coming back to haunt her. His portrayal was titled “I Now Frighten of What I Said and Did”. Pierre, dressed in yellow sleep-wear, after having fits of nightmares, eventually holds up a plaque saying “T&T, I’m Sorry.”

Pierre’s daughter, Lillan Pierre, portrayed “Dr Deyalsingh Working Overtime to Block the Corona”. Standing on a podium with clocks around her and cases of Stag and Carib beers, Pierre eventually revealed an empty box of Corona beer. This is Pierre’s fifth time winning the Queen title. Her daughter, Lynelle Pierre, placed second with “Dame Lorraine Ratings of Prime Ministers of the Past”. Dressed as a Dame Lorraine, Pierre showed how all the former prime ministers ranked. However only one former prime minister made it at the “bottom” of the Dame Lorraine.

Lovern Smith placed third with her portrayal of “Ah Rolling De Weed”, in which she rolled around a potted plant.

Also vying for a spot as King of Jouvert were Rondell Pierre and Lennox McEwen. Pierre, the grandson of Herbert Pierre, placed second with “Red Band Maxi Fares to Increase”. He portrayed a sexy woman in white lingerie with a red waistband. Pierre had the small crowd in stitches over his actions as he gave a comical portrayal of fares going up. McEwen placed third with his portrayal of “This Year Ah Mashing Them in Pears”. Dressed as a sprinter McEwen challenged himself to mash balloons with the picture of a pear stuck on them.

Speaking to reporters before the start of the reign of the Merry Monarch, Port of Spain Mayor Joel Martinez predicted a safe 2020 Carnival. He lauded the glass bottle ban. “I think this year’s Carnival will be a safe one. It is a fantastic idea to ban bottles. Over the years there were a lot of incidents where the hospitals are full of casualties and a lot of it come from broken bottles,” Martinez said

Martinez said the five routes, including areas along Long Circular Road, St James and Mucurapo Road, have been designated for Jouvert revellers will be safer for revellers. “This is going to be a safer Carnival with less issues. The police have been out there doing their job and I think it’s time that we have started to develop our Carnival in particular way by we want to structure things. We have a particular route we have engaged the Jouvert bands to go down for a safer environment,” he said.