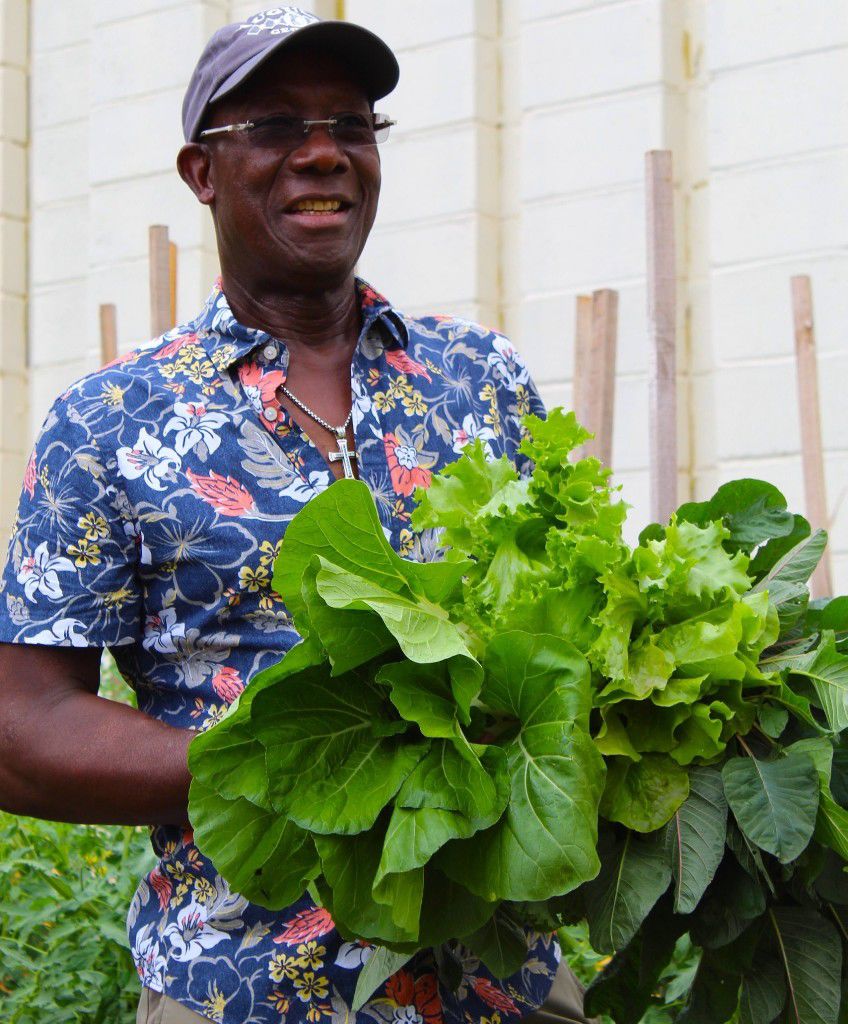 Prime Minister Dr Keith Rowley dispalys produce whic he harvested from his kitchen garden yesterday at his official residence, The Diplomatic Centre, St Ann's. The image was posted to his Facebook page, stating - "I come here when I have a little time, sometimes late in the evening or very early in the morning. I do a lot of focussed thinking when I am tilling the soil and while I am planting."

Photo courstesy The Office of the Prime Minister. 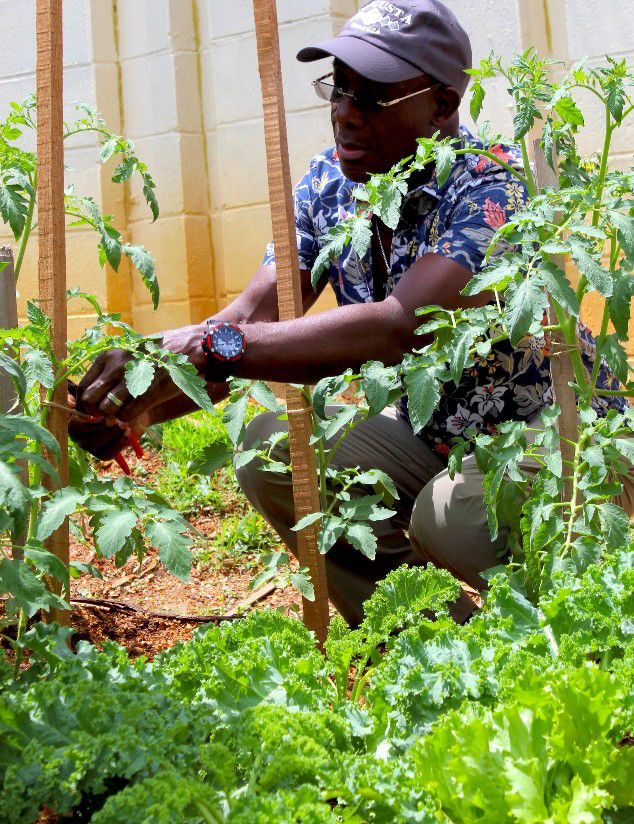 Prime Minister Dr Keith Rowley dispalys produce whic he harvested from his kitchen garden yesterday at his official residence, The Diplomatic Centre, St Ann's. The image was posted to his Facebook page, stating - "I come here when I have a little time, sometimes late in the evening or very early in the morning. I do a lot of focussed thinking when I am tilling the soil and while I am planting."

Photo courstesy The Office of the Prime Minister.

As the country awaits a reaction from Prime Minister Dr Keith Rowley on the controversy swirling around National Security Minister Stuart Young, he retreated to his garden yesterday where he spent time relaxing and doing some “focused thinking”.

Just after 4 p.m., seven photos of Rowley looking relaxed in the kitchen garden he said he started at the official Prime Minister’s residence, St Ann’s, were posted on social media.

“I come here when I have a little time, sometimes late in the evening or very early in the morning. I do a lot of focused thinking when I am tilling the soil and while I am planting. Since coming into office, I’ve created and kept a kitchen garden at the Prime Minister’s official residence in St Ann’s,” said the post, which was shared over 800 times shortly after.

In the photos, a smiling Rowley is seen tying tomato plants and harvesting lettuce.

He wore a colourful floral shirt and sported a chain with a pendant in the shape of a cross.

The post generated hundreds of comments from supporters praising the Prime Minister.

“Mr Prime Minister, producing good results is ingrained in your DNA. Planting is so therapeutic. You can also garner much insight from the experience. Much of what we do in the garden can be transferred and applied to our daily lives and the way we perceive and react to things.

“Apart from patience and caring I learned that though you sow good seeds, weeds always come up in between to choke out the good crops. It’s the same way in life, you sow good deeds but ‘weeds’ always come along to overwhelm your good intent.

“Just as you have to be careful when you are uprooting the weeds in the garden, so too you must be careful when you are handling the weeds in your life. You can destroy the good with the bad. Continue to exercise care and patience. Happy gar­dening. Sir, I pray that God continue to bless the work of your hands in Jesus name. Keep up the good works,” one person posted.

Another commented: “Great therapy, it is always good to reconnect with nature, extremely healing, apart from which you are setting a great example. Keep up the great work and enjoy every single moment.”

And another person shared how Rowley has provi­ded inspiration for agriculture.

“I remembered the first time I met you. I was doing agriculture at Pleasantville Sn Sec and you was the Minister of Agriculture at that time and you came at my house in Marabella and you have inspired me so much in my life that I still do agriculture to this day.

“I live in Tobago doing my farming and I pray one day to meet you again. These pics just brings tears of joy because I know how you love planting like me,” the person posted.

“Great to see our PM in his kitchen garden rather than behind a podium, that is the best sense of relaxation, especially watching your plants grow and also when it is time to reap,” said another.

“That is why you and your wife look so good straight from the garden,” another posted.

The therapy from tending to his garden may be what the Prime Minister felt was needed before he chairs his weekly Cabinet meeting today, given the last heated one led to the shocking resignation of public utilities minister Robert Le Hunte.

Do the right thing

It is not certain whether he will attend today’s post-Cabinet news conference at the Diplomatic Centre, St Ann’s, where he is sure to face questions about Young.

On Tuesday, US Ambassador to Trinidad and Tobago Joseph Mondello issued a statement disclosing he did in fact raise concerns with Young about the controversial visit of Venezuelan Vice-­President Delcy Rodriguez and T&T’s obligation under the Rio Treaty.

Young’s continued defence that he did not know the flight information and delegation accompanying Rodriguez (who is sanctioned) to a March 27 meeting in Port of Spain is also under question, with the leaking of the exemption letter which contained all the names.

Following the heat that emanated from the ambassador’s statement, Young took to his own Facebook page after midnight on Tuesday and posted the clips of him answering the question from Opposition Senator Wade Mark about the Rio Treaty.

He however did not gather as much support as the Prime Minister as his post was shared only six times and few people commented, with a couple insisting he should resign.

“Stuart u not looking too good right now...,” posted one person.

“Do the right thing and resign,” said another.

“Good day Minister I am sending some strength and prayers to you. We know that you are not a weak minister and light will always shine over darkness. We know who are pushing that wicked agenda about you and the PNM Government but they will never win. Stay strong,” another posted.

Young also provoked the ire of the Barbados Foreign Ministry in April, which said it felt compelled to issue a release saying it was “deeply disturbed” by Young’s comment that Caricom nations should not allow their offices “to be used” by persons intent on compromising Trini­dad and Tobago’s border policy.

National Security Minister Stuart Young has landed himself in an oily mess.

This after United States Ambassador to Trinidad and Tobago Joseph Mondello yesterday broke his silence on the controversial March 27 visit of Venezuelan Vice-President Delcy Rodriguez to Trinidad, disclosing he had expressed concern to Young about this in relation to T&T’s violation of the Rio Treaty.