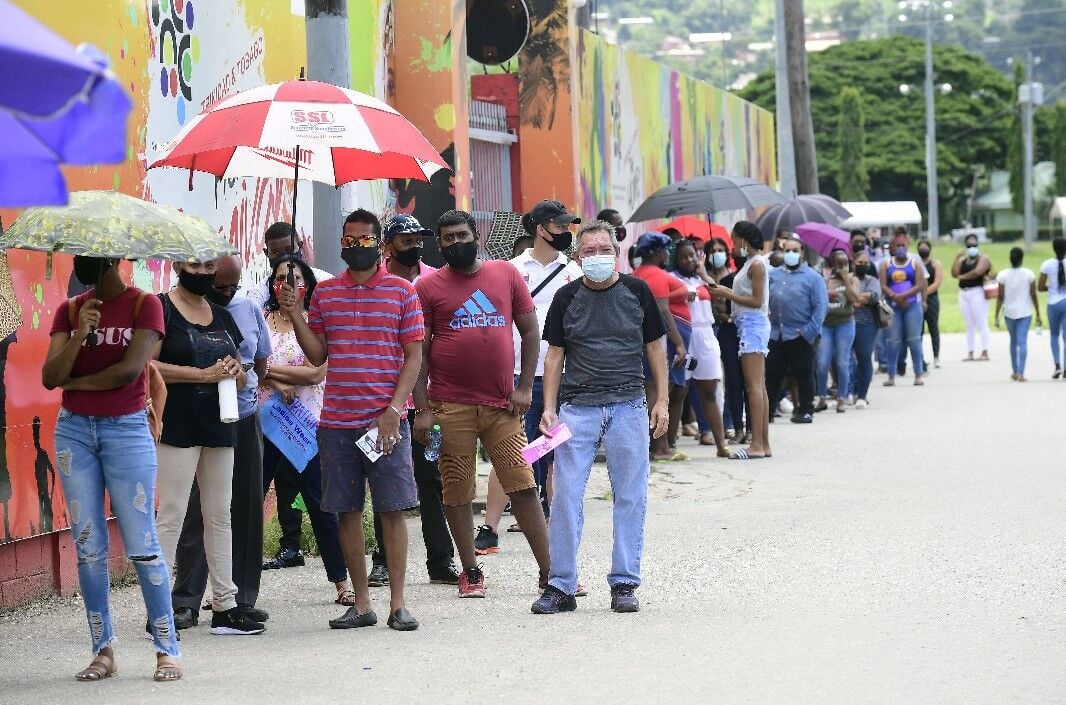 at the savannah: Members of the public line up to enter the Queen’s Park Savannah mass vaccination site to receive their second dose of vaccine yesterday. —Photos: JERMAINE CRUICKSHANK 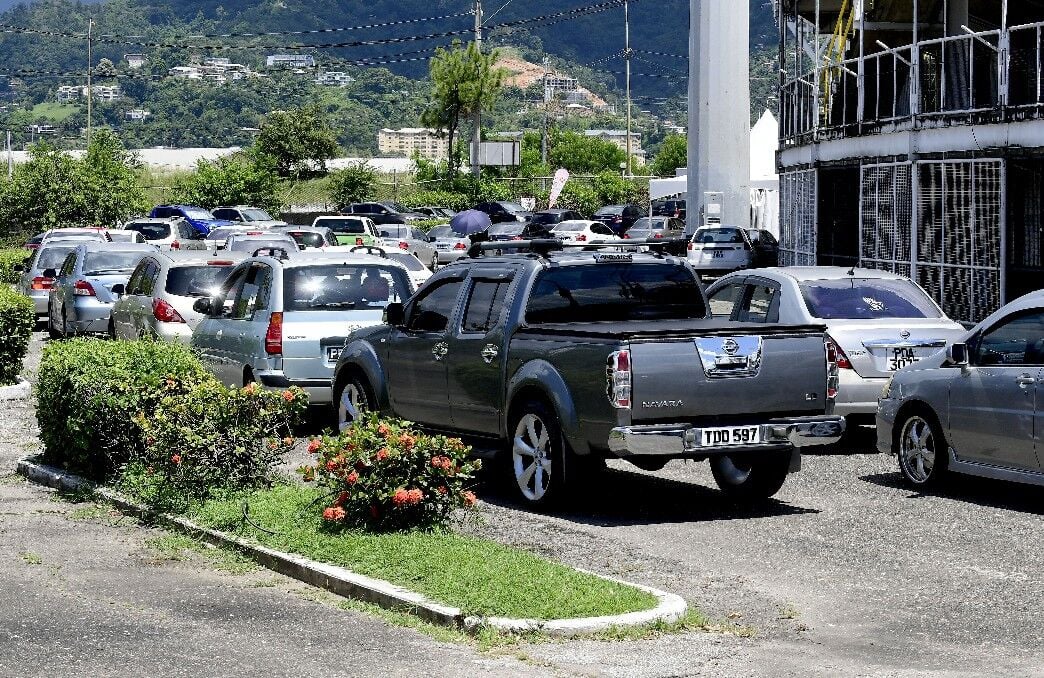 traffic jam: Bumper-to-bumper traffic as members of the public line up yesterday to access the drive-through vaccination site at the Hasely Crawford Stadium. Many showed up to receive their second dose of their vaccine.

at the savannah: Members of the public line up to enter the Queen’s Park Savannah mass vaccination site to receive their second dose of vaccine yesterday. —Photos: JERMAINE CRUICKSHANK

traffic jam: Bumper-to-bumper traffic as members of the public line up yesterday to access the drive-through vaccination site at the Hasely Crawford Stadium. Many showed up to receive their second dose of their vaccine.

So said Mona Jarette after arriving at the drive-in vaccination site at Hasely Crawford Stadium, Port of Spain, at 10.30 a.m. and leaving around 3.30 p.m. yesterday.

She was among scores of people who flooded the sporting site for the Sinopharm and Pfizer vaccines.

She had gotten her first shot of Pfizer at the National Academy for the Performing Arts (NAPA) in Port of Spain. But comparing NAPA’s treatment to the stadium, Jarette said: “It was a disaster. People were waiting in their cars. Vehicles were overheating. Cars were breaking down in the intense heat. Taxpayers are paying for this. Not even a bottle of water.”

Asked why she took the vaccine, Jarette said: “To not contract the Covid-19 virus, or the Delta strain.”

An eyewitness said there were massive lines of cars from as early as 10 a.m. The queues started just off Wrightson Road, and wound their way alongside the Professional Centre, at Fitzblackman Drive and Lions Club.

Republic Bank employee Rudra Soondarsingh had taken his daughter Nalini, a pupil of St Joseph’s Convent, Port of Spain, for the Pfizer vaccine. She said she was “happy” to return to physical school.

North West Regional Health Authority (NWRHA) chief executive officer (CEO) Salisha Baksh said yesterday “the numbers we have been seeing are a lot of second doses. The NAPA site is no longer operational. I don’t have the preliminary figures for the first and second doses. But I should be able to provide them tomorrow.”

In a phone interview yesterday, president of the Registered Nurses’ Association Idi Stuart said: “We have not seen anything like the surge we saw today. The site was opened for about two months. This is the first time we saw so many people and cars.

“A lot of people took the vaccines today. We saw traffic jams. And it stemmed from the Prime Minister’s statement.... that employers would have to create safe zones.

“In a sense Government had made it mandatory, and now the institutions are making it mandatory for employees to get vaccinated. We have never seen so many people before today.

“There were traffic jams. We saw a car overheating. A woman came out and opened her radiator and got burned. And the people wet her down. She had a baby and another passer-by had to take the baby to another car to cool the baby down,” added Stuart.

Analysing the increased crowd, Stuart said: “If the Government wants to open the country they have the power to take strong action. They took strong action which could have been done a long time ago.”

Yearning for a good lime

There was also a surge in walk-ins at the Paddock, Queen’s Park Savannah (QPS), yesterday. Random checks with people revealed they were taking the vaccine to get back to work, get their children to physical school, and they were terrified of the Delta strain which is now deemed community spread.

Some people said they had no choice because they were caregivers for elderly, babies and small children.

Several people also said although they had relied on homemade potions like fever grass and ginger tea, they were no longer taking any chances.

One man said he agreed with some Full Gospel pastors it was the “mark of the beast”, but he had to take the vaccine to be able to work. People also said Trinis were yearning for a “good lime”.

Both a security guard and Morvant snow-cone vendor John Smith said they had seen about 300 people from around 10 a.m. to about 12.30 p.m.

They said the NAPA site was closed and it could have caused the influx. Another prevailing view was the Republic Day holiday had prevented people from getting vaccinated so there was an overspill yesterday.

Mon Repos resident Sandra Wilson and her son Kashiff Wilson said they took their first dose of Sinopharm. She also said her daughter, a pupil at South East Secondary School, was still deciding whether to take the vaccine or not.

St James resident Genesa Beharry said she was a caregiver for her father, Garnet Beharry, 68, and she had to do the shopping and purchase his medicines.

Natisha Celestine said she was taking Pfizer as she was a manager at a restaurant.

San Juan resident Leela Dass said she got great treatment at the Divali Nagar Site, Chaguanas, but she had a delay when she took her son Karan Dass, 13, a pupil of San Juan Secondary School. He said: “I want to return to school. Too many distractions at home. I want to be a mechanical engineer.”

Her husband Jai Dass said: “People want to lime. They want to go to the river and beach. They want to party. They are eager for Carnival.”

In the East, Arima resident Giselle Coker said there was a large turnout of walk-ins at Larry Gomes Stadium, Arima. Scores of people opted for the Pfizer vaccine.

State may have to pay million$ to beaten prisoners