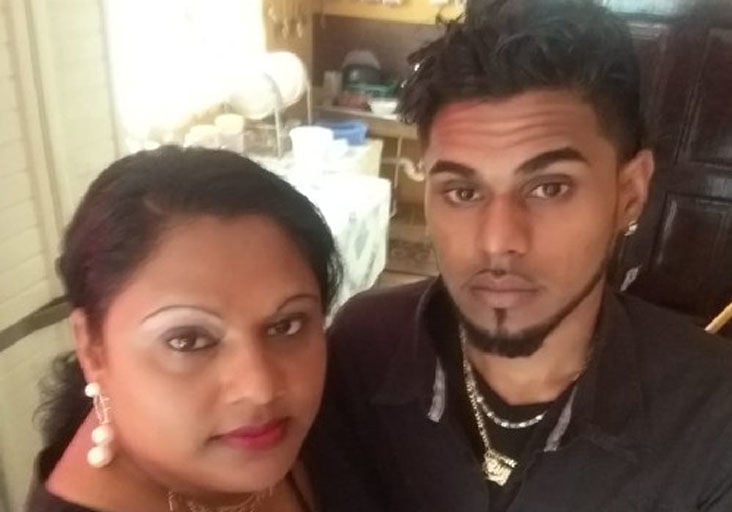 Runa Ali and her son, Brandon Kissoon, shortly before he and six other fishermen were murdered at sea in July last year. 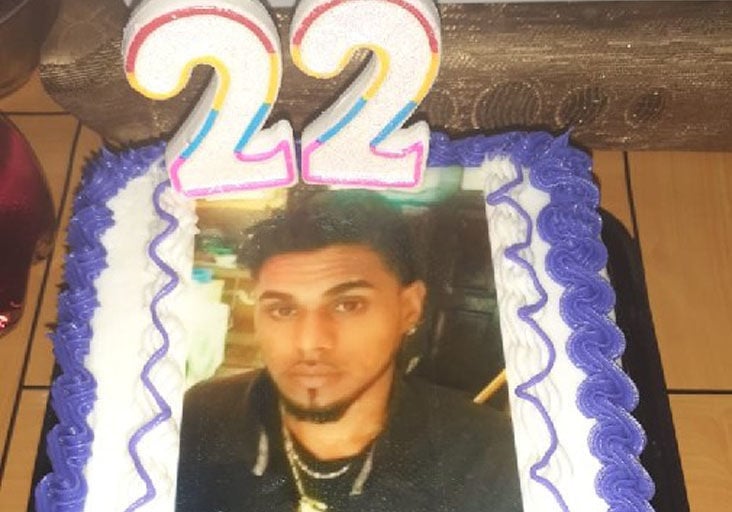 Cake with an image of murdered fisherman, Brandon Kissoon, made by relatives for his 22nd birthday on February 3rd.

Runa Ali and her son, Brandon Kissoon, shortly before he and six other fishermen were murdered at sea in July last year.

Cake with an image of murdered fisherman, Brandon Kissoon, made by relatives for his 22nd birthday on February 3rd.

On Valentine’s Day last year, Brandon Kissoon, one of the seven fishermen who died in an attack in the Gulf of Paria last July, visited his mother, Runa Ali, at San Fernando General Hospital with a purple rose.

“I was hospitalised for stress-related illnesses and Brandon came and gave me the rose and encouraged me to get back up on my feet. He told me to break out on my own and work for myself and become independent. Up until then he and I were working for a close relative who was a fisherman,” Ali related to the Express yesterday.

The memory of her son’s visit to the hospital came back to Ali at her workplace yesterday as she wept quietly.

She said this Valentine’s Day, being celebrated worldwide today, will be particularly sad for her.

“I cry every single day for my son,” she told the Express.

Ali said she got a clear dream about the incident before it happened and had begged him not to go out to sea.

“I told him they are going to rob you. He said, ‘ma, don’t worry. I not leaving you and going nowhere’.”

She said after she was discharged from hospital, she took her son’s advice and worked in various places to earn an income.

Kissoon, the eldest of her three children, was thrown overboard in an attack in the Gulf of Paria between Orange Valley and Carli Bay. He was 21.

His body washed ashore a couple days later and he was cremated soon after.

Ali, a single mother of two other children, 17 and 14, said Kissoon was the family’s strength.

“Nobody in the world could separate me and Brandon. He was always at my side and acted like a father to the children. When my son graduated, he attended as his father.”

Kissoon would have turned 22 on February 3 and the family celebrated his birthday in his absence.

“His cousin made a beautiful cake with Brandon’s picture on it,” the weeping mother said.

Ali said her grief is double since the body of her nephew, Justin Kissoon, one of the seven who were attacked, has never been recovered.

“Justin stayed by me for three months before the incident. People said I would go crazy after my son died and I felt like that. Nobody knows what I go through,” Ali said.

The body of Jason Baptiste was also never found. The other five — Leslie Deboulet, Anand Rampersad, Shiva Ramdeo, Trevor Baptiste and a man known only as Alex — washed ashore and final rites were performed for them.

Ali said she and her children have never eaten fish since the tragedy.

“We used to eat fish every day. Now, no one wants to see fish.”

She said all kinds of rumours have been circulating about the murder of the fishermen, including that it was drug-related.

She said her son worked hard “from small” to take care of his needs.

“He worked with his father who was a fisherman when he was going to school and with the pay he got he would buy his uniform. He continued to work with his father until he broke away and was working for someone else until the time he was killed,” she said.

Search called off for missing fishermen

THE search for two men lost at sea—Justin Kissoon and Jason Trevor Baptiste—has been called off. But relatives of the missing men are seeking closure. The men were among seven fishermen reported missing following an attack by local pirates two weeks ago.

The search for two missing fishermen may have to be called off. But their relatives are stil…

HOPE has been lost for finding missing fisherman Jason “Trevor” Baptiste alive, his brother Yasin Khan said yesterday. Speaking to the Sunday Express, Khan said his family has been shattered by their loss as well as the ordeal the families of the other fishermen in the community have endured.

Weeping wives: Are all 7 fishermen lost?

In a midnight pirate attack, five fishing vessels were stolen from the Gulf of Paria in the …

Agriculture Minister Clarence Rambharat has instructed the Commissioner of State Lands to immediately advise the promoters of the upcoming Karukera One Love Beach Festival that they are not allowed to construct a Carnival fete stage on the seabed of Maracas Bay. The minister said he will follow up to ensure that his instructions are carried out.

Chalkdust back in final

Nine-time National Calypso Monarch Chalkdust (Hollis Liverpool) will make an attempt at claiming his tenth title, having made it to the competition’s final, to be held on Thursday at the Queen’s Park Savannah, Port of Spain.

Audio issues and the stage lights cutting off plagued their performance, but Bunji Garlin, Fay Ann and the Asylum Vikings still sent thousands of partygoers wild at Friday’s Army Fete, at the Queen’s Park Savannah, Port of Spain.

The murder of nurse Narissa

Nurse Narissa Nikki Goora was walking home from work, nearly four years ago, when she was stabbed to death by men hiding out in a house on her street.

HEALTH authorities in Barbados are monitoring 13 people who are quarantined in their homes after arriving from regions impacted by the coronavirus.

A security officer on duty at Maracas beach turned lifeguard on Sunday morning, rescuing a m…