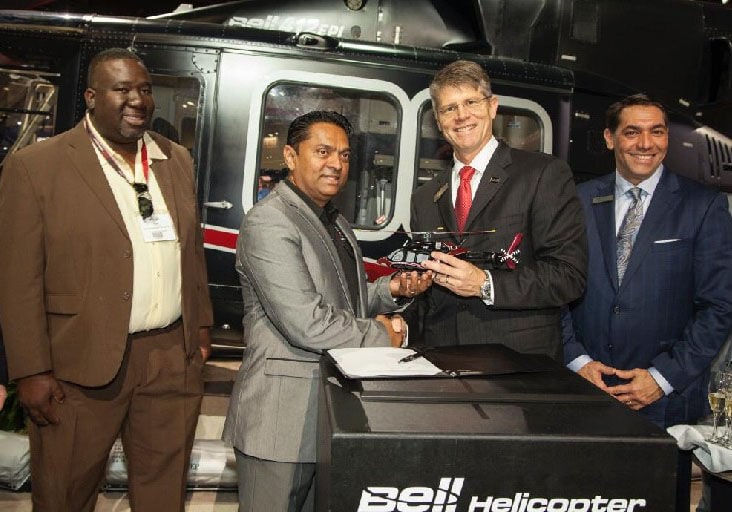 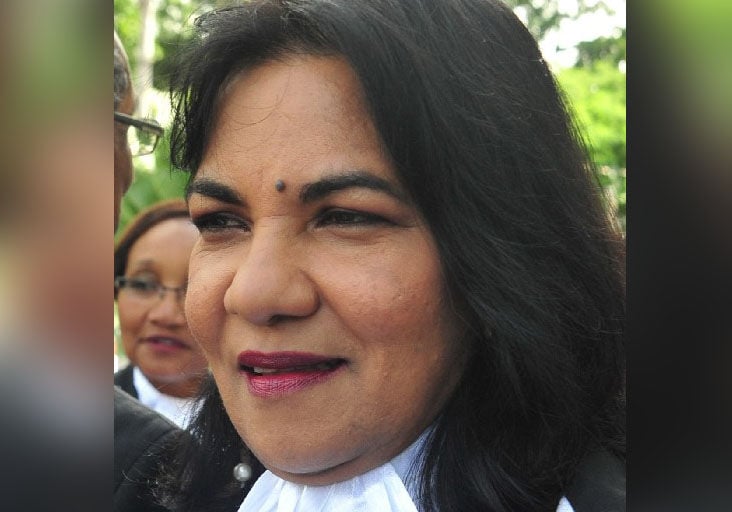 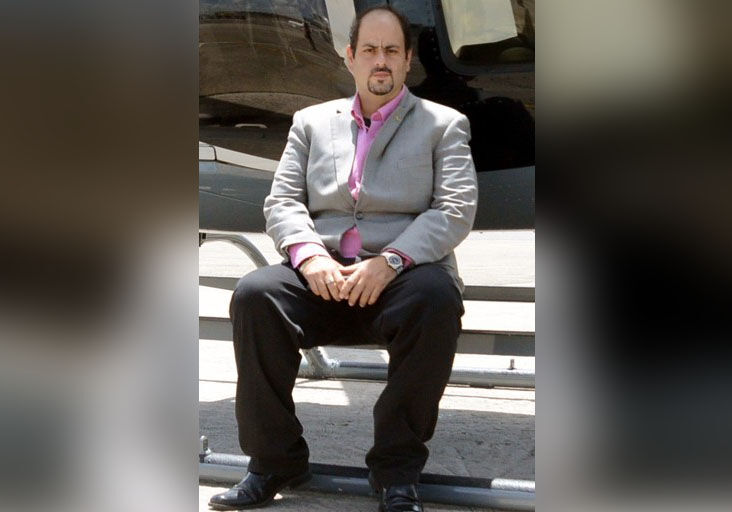 The company has yet to take legal action against the Government over the loss of the TT$600 million contract.

A contract was entered into with local businessman George Tannous for the construction of the hangar.

Tannous, through his company Caribbean Border and Safety Technologies Ltd (CBST), which was registered on October 12, 2012, secured the multi-million-dollar contract for the building and outfitting of an airport hangar at the Cumuto Air Base.

He was also the local agent for Bell.

Tannous is currently the director of Island Hobbies, a toy store on Wrightson Road, Port of Spain.

Negotiations for the aircraft took place in 2014 during the tenure of then-National Security Minister Gary Griffith and on March 4, 2015, a purchase agreement was signed by then-head of the National Operations Centre (NOC) Garvin Heerah.

Upon obtaining the contract to build and outfit the hanger, CBST proceeded to sub-contract an Australian company called Bettabuilt PTY—for design/engineering and fabrication works at a cost of US$7 million.

CBST was invited to tender for the provision of helicopters and other services as well as the construction of the hangar, and was notified of an award in November 2014 by the NOC when it then fell under the Office of the Prime Minister (PMNOC).

CBST sued the Attorney General for damages for breach of a contract dated March 17, 2015, for the building and outfitting of an airport ­hangar at the Cumuto Air Base.

The CBST claimed it entered into the contract with the Government of Trinidad and Tobago, to the tune of US$$21,800,000 (plus VAT), but the State has denied this.

The State claims that even on the face of it, the contract says otherwise, but it contended further that when one looks more closely, the entities who were the true contracting parties had no authority to bind Government under the contract.

In his affidavit, Tannous stated his company CBST is a security and construction business, “specialising in security technology supplies in border protection”.

He indicated that some time in 2014, he attended a helicopter exposition in Texas, representing Bell as its local and regional representative.

“At this exposition, a T&T government contingent visited the booth of Bell and I introduced myself to them. Based on what they told me, I was aware that the government was in the early stages of looking for new helicopters,” he said.

One of the government’s representatives was taken on a demonstration flight which was set up by Tannous at the exposition.

“I am aware that other companies were invited to tender. The other services outlined in the Requests for Proposals were namely: the supply and installation of a fully outfitted hangar...”

In its claim, CBST said the services of Chan General Contractors to provide certain surveying/engineering services were retained.

Director Russel Chan gave evidence at the trial and confirmed his agreement to provide services to CBST.

He also provided a quotation and details of the work done in three phases and produced his survey ­documents.

Financial director Amalgamated Security Services Ltd (ASSL) John Aboud was approached by the CBST and quoted for the supply and installation of a fire suppression system, in the sum of US$248,123.53.

Aboud gave evidence as to the steps ASSL took to procure the system, such as conferring with several overseas suppliers, following which the best system was identified.

When CBST confirmed it had signed the contract with Government, Aboud proceeded to order the system, on the expectation that he would be paid when the mobilisation fee was paid.

It was Aboud’s evidence that some of the components and equipment of the fire suppression system actually arrived in Trinidad.

Since the mobilisation fee was not paid, Aboud indicated he was forced to return the part supplied and incurred expenses of US$72,000 which represented, from his supplier’s end, a 30-per cent restocking fee.

On May 5, 2020, Justice Carol Gobin delivered a 32-page ruling which stated that CBST was entitled to compensation to meet its liability to those it sub-contracted, namely Chan General Associates in the sum of TT$195,000 and to Amalgamated Security Services Ltd in the sum of US$72,000.

Additionally, CBST claims for any sums in excess of these specific ones were refused.

On the issue of costs, the judge said CBST “failed to establish the bulk of its claim” and ordered the company “to pay the costs to the State calculated on the prescribed scale on the balance of the sum claimed and in respect of which it was unsuccessful, that figure is to be reduced by 33 1/3 per cent. The discount is applied to reflect the court’s disapproval of the introduction of the illegality claim after the trial and for the first time at the stage of submissions.”

Gobin found on the evidence that ASSL was owed the sum of US$72,000 by CBST, noting that “this falls well short of the sum of USD$150,000 indicated on the Statement of Case”.

In her ruling, Gobin also questioned the absence of a claim by the main contractor of the air hangar, Matthew Garry, given that the company Bettabuilt was owed US$7 ­million.

Gobin stated, “I have drawn adverse inferences from what I find to be Mr Garry’s deliberate refusal to do so. I consider it highly improbable that a company which is owed US$7 million and which itself threatened and notified the claimant of the institution of legal proceedings, would simply not participate because Mr Garry was not interested in discussions, or out of his utter frustration, or on a hope that he could still be paid. I reject the explanation that his refusal to sign the witness statement may be explained by pique.”

The judge noted as a direct consequence of Garry not giving evidence, CBST was left with “hearsay” of a loss.

Justice Gobin ruled that CBST is entitled to compensation to meet its liability to Chan General Associates in the sum of TT$195,000 and to ASSL in the sum of US$72,000.

The judge explained she was expressing the ASSL sum in US dollars because the restocking fee was charged in that currency.

The claimant’s claims for any sums in excess of these specific ones are refused, she ruled, adding that there shall be judgment in the sum of TT$195,000 (Chan) plus US$72,000 (ASSL).

On the issue of costs, the judge ruled that the claimant had failed to establish the bulk of its claim.

“CBST is ordered to pay the costs to the State calculated on the prescribed scale on the balance of the sum claimed and in respect of which it was unsuccessful, that figure is to be reduced by 33 1/3 per cent. The discount is applied to reflect the court’s disapproval of the introduction of the illegality claim after the trial and for the first time at the stage of submissions,” the judge said.

Contacted by the Sunday Express on January 8, Tannous was asked, as former local representative for Bell Helicopters, if he could indicate the process by which CBST was awarded the contract to supply helicopters to the NOC.

Tannous responded that the tender was advertised, but added, “I would not be able to discuss that, I would have to make a call to somebody to see if I can discuss things with you, due to what is. I will have to make some calls and I will call you back in a bit.”

The following day (January 9), a WhatsApp message was sent with a reminder regarding the questions asked, inclusive of the number of contracts awarded to Caribbean Border and Safety Technologies by the TTPS, and what exactly did CBST provide to the TTPS.

Additional calls to Tannous’ cellphone on January 12, 14 and 15 were unsuccessful.

On January 5 the Sunday Express contacted Bell Helicopters, seeking a comment on the contract.

By January 7, senior global communications strategist at Bell, Blakeley Thress, responded via e-mail, stating: “Although a contract was signed, the government at the time did not make the required deposit per the agreement. Therefore, Bell was unable to proceed with delivery of the aircraft. At that time, we did have a local partner, Caribbean Border and Safety Technologies, but Bell does not have an authorised partner in T&T at present. Bell has not instituted any legal action against T&T.”