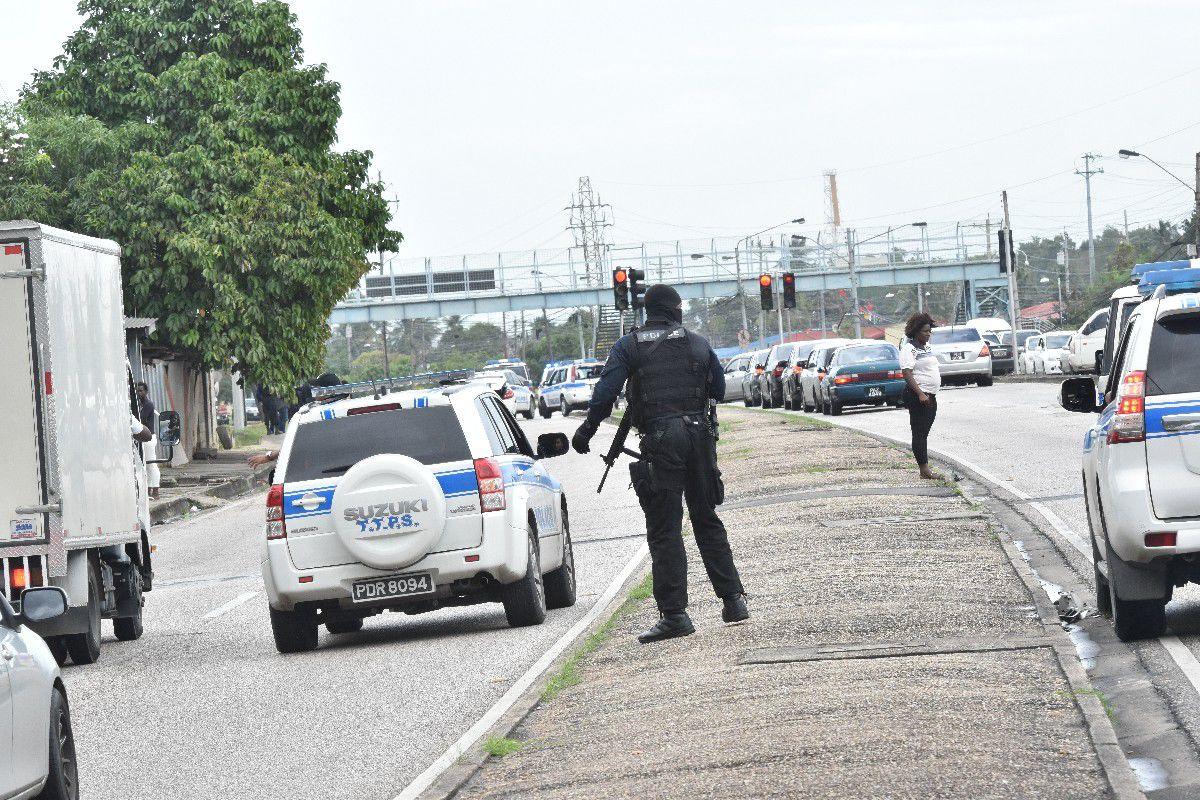 DANGER ZONE: A heavily armed police officer walks along the island on the Eastern Main Road in Laventille yesterday near the old Citrus Growers Association compound following the exchange of gunfire with the occupants of a white Tiida. 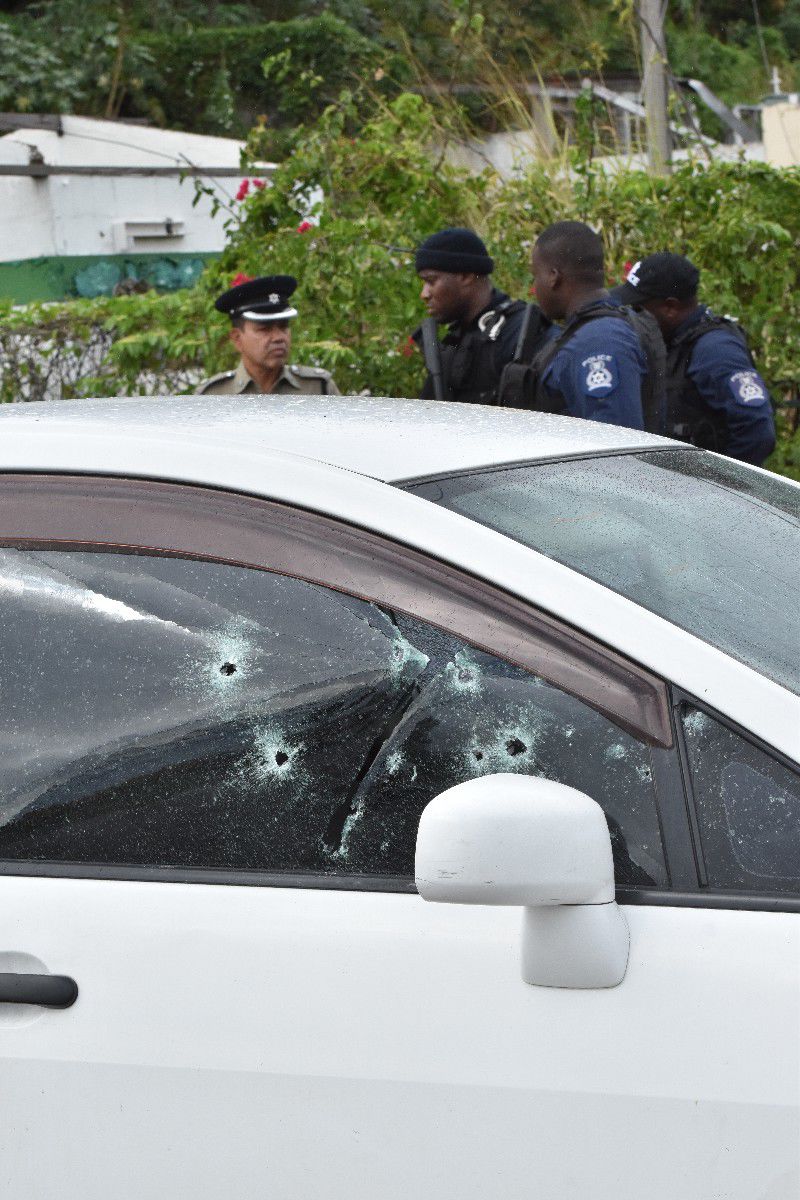 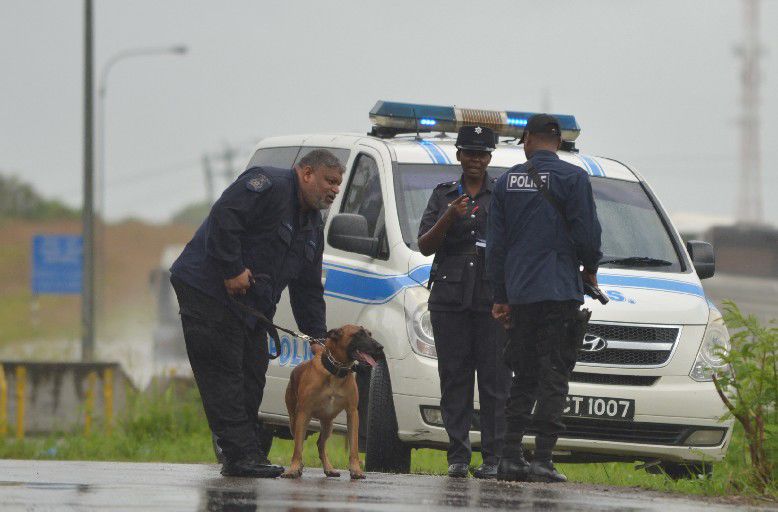 LOOKING FOR CLUES: Police officers from the K-9 unit look for evidence along the Solomon Hochoy Highway, at Macaulay near the Claxton Bay overpass yesterday, after kidnappers crashed a doctor’s vehicle. This followed the robbery and kidnapping of two doctors after they left work at the San Fernando General Hospital early yesterday morning. Dr Rudradeva Sharma died in the crash.

DANGER ZONE: A heavily armed police officer walks along the island on the Eastern Main Road in Laventille yesterday near the old Citrus Growers Association compound following the exchange of gunfire with the occupants of a white Tiida.

LOOKING FOR CLUES: Police officers from the K-9 unit look for evidence along the Solomon Hochoy Highway, at Macaulay near the Claxton Bay overpass yesterday, after kidnappers crashed a doctor’s vehicle. This followed the robbery and kidnapping of two doctors after they left work at the San Fernando General Hospital early yesterday morning. Dr Rudradeva Sharma died in the crash.

Just two weeks after six people were shot in Port of Spain, which claimed the life of a Las Cuevas woman, two more people were killed.

Eighteen-year-old Shakira Mona, who was shot in her leg and arm, survived but is in a serious condition.

The dead people are Aaron “Max” Broomes, who was shot in the head, and Kayode “Toes” Donawa, who was shot multiple times to his chest.

Broomes and Donawa died at the Port of Spain General Hospital.

A fourth person sought medical treatment for injuries sustained while he was attempting to escape the gunfire. His injuries were said to be minor, however.

Police said the violent incident unfolded around 2.25 p.m. along Queen Street, in the vicinity of Nelson Street when a white Nissan Tiida pulled to a stop and two men armed with firearms exited the car.

The men walked to a northern area off the roadway, where they opened fire on a group of people.

They then returned to the Tiida and drove away.

The police and emergency health services were notified and the injured were rushed for treatment at the General Hospital.

When the Express visited the scene, residents of the area said they were in shock.

“This is the second time in less than a month this kind of madness happened. Not me and this place, nah. I am staying home from now on,” said a man who gave his name as Russell.

Another man lamented the fact that a woman had to be shot.

“I fed up of this spray-and-hit-everybody technique these young fools have. If you come for a man, as wrong as it is, you come for that man. You didn’t come for the people that are around them at the time. And most of the time they not even shooting straight and it’s innocent people who picking up. Last year it was the woman. Today that girl pick up. When will y’all stop? When it is a child? These people need to be stopped, and they need to be stopped now!” the man said.

An all-points bulletin was issued and a vehicle matching the make and number plate was spotted along the Eastern Main Road, Laventille.

Officers attempted to intercept the vehicle, but said its occupants opened fire on them.

The Tiida was hit multiple times and, as a result, the driver stopped in front of a broken-down building which once housed the Citrus Growers Association juice packaging factory.

In the hail of gunfire, the suspects escaped.

No police officer was injured during the exchange, but investigators believe that the gunmen were wounded, based on a blood trail from the scene of the shooting.

The vehicle was subsequently impounded.

Officers of the Port of Spain Division and the Inter Agency Task Force, under the supervision of Senior Supt Ramdeen responded, and exercises were launched in the Laventille community aimed at detaining the suspects.

Three men were detained by officers, who conducted searches in the area.

The Express also visited this scene and saw the left back window of the police’s Nissan X-Trail was shattered. The Tiida was riddled with bullets.

Residents of the area said the shooting had left them concerned.

“I was sleeping when I was awoken by gunshots. It was shots like rain. Just corn (bullets) was pelting (being shot). I looked out my window and I saw the police shooting at some men. But like them men had assault riffles or something ‘cause some of them police was lying on the ground when they get shot at. But as quick as it start, it was done, and them gunmen escape up the hill,” a woman told the Express.

Another asked why “mass shootings” were on a rise.

“But it’s every day so they just going to open fire on people? How that making any sense? The police and them bad boys exchange shots just when school done. Children were walking around,” the resident said.

A similar incident took place on George Street, Port of Spain, on December 31.

In that incident, Lystra Hernandez-Patterson was fatally shot while at the Blanchisseuse taxi stand. Seven other people were wounded in this incident.

Two suspects, identified as Richard Thomas, 29, and Joel Roberts, 29, both of Sea Lots, were killed following a confrontation with police moments later.

Police were told that about 2.50 p.m. on December 31, following a shooting spree along George Street, police responded and were on the lookout for the getaway car—a black Nissan Tiida.

Officers on mobile patrol said that they noticed the vehicle driving along Nelson Street and they attempted to intercept.

The gunmen opened fire on the police car.

The officers returned fire. However, the driver sped away in the direction of Sea Lots.

The officers were able to intercept the car once again in the vicinity of the Central Market, and there was another shoot-out.

The occupants of the car were shot, and the car crashed into a culvert.

They were all rushed for medical treatment, but died. The murder toll for the year so far stood at 16 last night.

—With reporting from Gyasi Gonzales

More deaths than days: Barber gunned down in Arima

A day after 43rd birthday, Julien Christopher Caleb was gunned down.

POLICE are building a murder case against two men who survived the crash that killed medical practitioner Dr Rudradeva Sharma.

RELATIVES of one of the two men killed after being shot in east Port of Spain on Wednesday denied that they were intended targets but were in the wrong place at the wrong time.

National Security Minister Stuart Young is a danger to democracy and is unfit to hold any public office in Trinidad and Tobago.