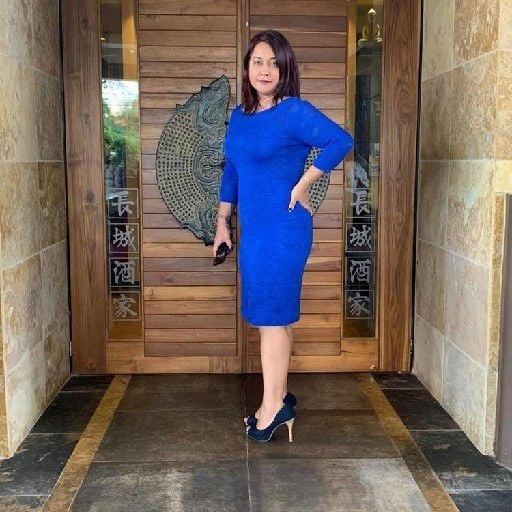 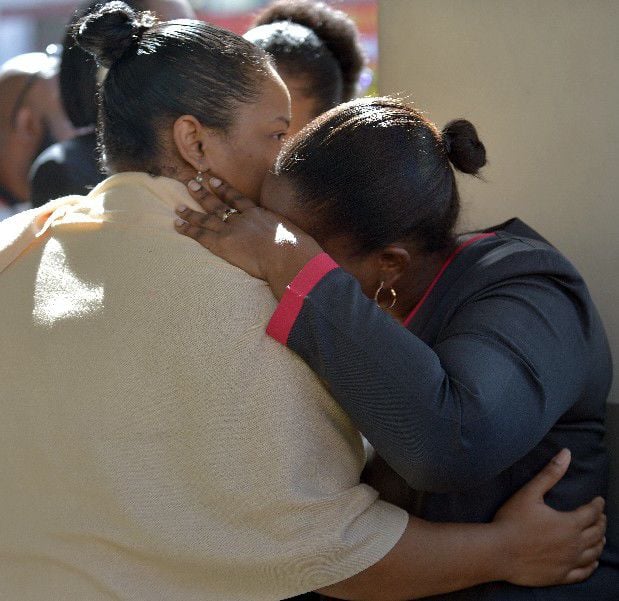 Colleagues GRIEVE: Employees of Venture Credit Union console each other at the crime scene where their co-worker, Naiee Singh, was murdered in the company’s car park at Southern Main Road, Couva, yesterday. Singh was killed by her estranged husband, Roger Singh. 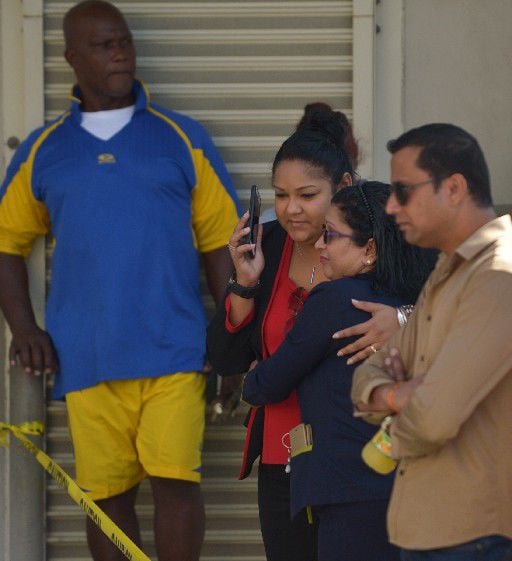 OVERWHELMED: Employees of Venture Credit Union console each other yesterday at the crime scene. 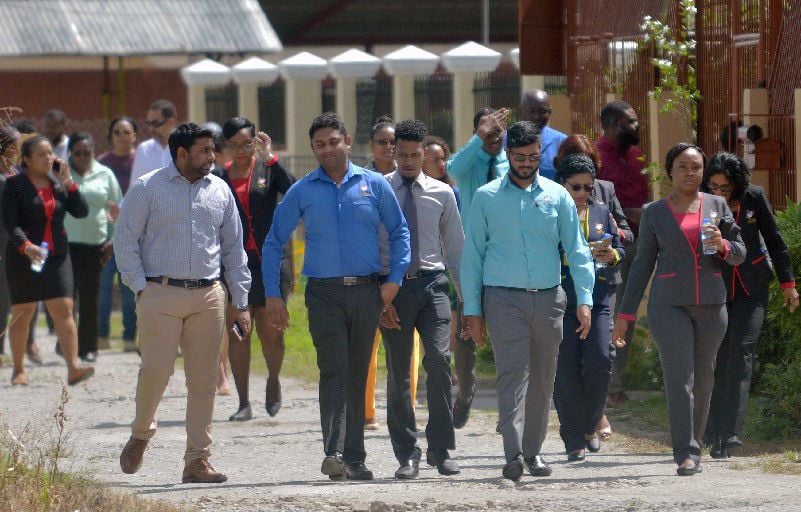 Employees of Venture Credit Union at the crime scene where their co-worker, Naiee Singh, was murdered at Southern Main Road, Couva, yesterday.

Colleagues GRIEVE: Employees of Venture Credit Union console each other at the crime scene where their co-worker, Naiee Singh, was murdered in the company’s car park at Southern Main Road, Couva, yesterday. Singh was killed by her estranged husband, Roger Singh.

OVERWHELMED: Employees of Venture Credit Union console each other yesterday at the crime scene.

Employees of Venture Credit Union at the crime scene where their co-worker, Naiee Singh, was murdered at Southern Main Road, Couva, yesterday.

Naiee Singh suffered in silence for many years, enduring emotional torment and verbal abuse from her husband.

Last year, she separated from him, but even then the torture continued and he stalked her.

She then took out a restraining order, wanting to live in peace.

It escalated into murder-suicide yesterday.

Singh was shot dead by her estranged husband, who then turned the gun on himself.

Singh, 31, was struck twice to the head and died in the car park of her workplace at Venture Credit Union, Southern Main Road, Couva. The killer, Roger Singh, 32, of Balmain, Couva, ended his own life with a .38 revolver.

One of Singh’s co-workers who witnessed the murder-suicide around 7.56 a.m. told investigators that he was seated in his vehicle after pulling into the car park opposite their workplace when the tragedy occurred.

Singh had parked her car and as she emerged from her vehicle, she was attacked by her estranged husband.

The co-worker heard screams, and he looked through his back window and saw Roger Singh armed with a firearm and the victim “scrambling” on his car.

While exiting his vehicle, the witness heard two shots and saw Singh on the ground and a man standing over her.

He ran for help and heard two more shots and on his return he observed the man on the ground with the firearm in his hand.

Both died on the street.

They were married for at least ten years but had no children together.

Roger Singh, a father of one of Balmain, was employed as a lecturer at the National Energy Skills Centre (NESC).

Naiee Singh’s brother, Beeraj Persad, and other relatives and close friends were too grief-stricken to speak to the media at the crime scene.

And at her home at Jim Street, Esperance, near San Fernando, her father said he was not in an emotional state to speak about what happened to his daughter.

A brother of the killer also declined to be interviewed, but looked on silently as Singh’s family wept, and the police processed the crime scene.

A lot of abuse

Singh’s best friend, Christa Prevatt, wept as she recalled the emotional torture her friend endured, which led to her erasing her social media presence.

Prevatt said when Singh changed her phone number and her estranged husband was unable to reach her, he contacted her mother and “said the most vile things”.

“She tried to be the perfect wife. She gave him everything but it was never enough. I don’t know how long she suffered in silence. There was a lot of emotional abuse, hurtful words. She was so fearful because of the hounding, persistence and following her around,” said Prevatt.

“When he thought he wasn’t getting to her, he would torment her family members. He called her mother and saying vile things to her. The torment got so much that Naiee had to excise many activities, like exercise. He was badgering her on social media and on her phone and she had to change her phone number. She went to the police and got a restraining order,” said Prevatt.

A friend of the family, who did not want to be named, said in the early years the couple seemed to have a perfect marriage.

“At first he was a gentleman to her and the family. He was well-spoken and nice to her and everyone. Then things started to go wrong.

“While he did not hit or beat her, there was a lot of verbal abuse, cursing and emotional torture. He would speak the most violent to Naiee, who was a very quiet and peaceful person.

“When she left him he went to her home and said the most nasty things to her family. He used to stalk her and wouldn’t leave her alone,” the friend said.

Last Monday, Singh went to the Magistrates’ Court and obtained an order restraining her estranged husband from contacting her.

Prevatt, however, said a restraining order was not enough to end domestic-based violence.

“People who display this type of mental illness need to be restrained. Families are torn apart. There are people who can’t deal with psychological issues and don’t have a way to treat with it, realise that it’s help that they need.

“They act out and take permanent decisions in a temporary situation. For all women and men out there who are hurting from some kind of situation – seek help, seek help. This is not the end point even though someone has separated from you,” she said.

Venture Credit Union chief executive officer Ramesh Lutchman spoke yesterday on behalf of Singh’s colleagues who had gathered in grief and shock outside the building.

Lutchman said the security officers at the Couva branch were also placed on alert regarding Singh’s protection order, and as far as he knew, yesterday was the only time that she was attacked at work.

He said Singh worked at the credit union for approximately three years.

“She was a bubbly child, 31 years. She had the love of all the staff. A well-loved, hard-working, dedicated, loyal staff member that we will all miss tremendously. All of our staff are traumatised,” he said.

Lutchman said the credit union branch was closed yesterday and will remain closed today while staff have been offered counselling services through the Employee Assistance Programme.

Last week, the Gender-Based Violence Unit (GBVU) was formed by the Trinidad and Tobago Police Service.

At the launch, Commissioner of Police Gary Griffith apologised for the TTPS not doing enough in the past to tackle domestic violence in this country.

Griffith said the unit will begin by comprising three to four individuals per policing division, and would work in tandem with the other units in their respective districts, with special assistance from the Emergency Response Patrol (ERP) Units.

The ERP Units would be the first responders, taking details of the case; and once it is identified as one involving domestic violence, it would be forwarded to the GBVU team.

Deyalsingh said the use of GPS tracking bracelets should be implemented for the victims of threats who have obtained a restraining, and those who the order was taken out against.

He said judicial officers should view the person making threats as someone who can commit a murder.

“The GBVU can ensure that the man is arrested and charged for making these threats. The magistrate should ensure that the GBVU should be on board and do an assessment that any sort of granting of bail to having a GPS bracelet,” said Deyalsingh.

He said group therapy and anger management were also recommended.

The person who the order has been taken out against should also be monitored on their cellphones, as a means of checking if they are making threats to the other party, he said.

“Ensure that the high-risk ones have the GPS bracelet on and the GBVU can act at a moment’s notice. If it is signalled in her device, this team has to act immediately,” said Deyalsingh.

Deyalsingh said a period of incarceration should also be considered for these offenders.

“This problem keeps traumatising the population. They have to keep reading and hearing about this thing happening. Men are more prone to suicide/suicidal than women — about three to four times more men kill themselves where there is a loss of a romantic situation and there is a loss of the other partner,” said Deyalsingh.

“Men who tend to feel that they own women as property — it is a warped sense of love,” he added.

Wife-killer's relative: 'He tripped off'

A RELATIVE of Roger Singh claimed today that he was never a violent person but on the day he shot his estranged wife, Naiee Singh to death he …

‘Where did Singh get the firearm?’

A RELATIVE of Roger Singh claimed yesterday that he was never a violent person but on the day he shot dead his estranged wife Naiee Singh he may have “tripped off”.

'Naiee was the victim!' Her story will not be silenced, vows friend

Naiee Singh was murdered by the man she once loved but her voice will not be silenced, says her best friend, Christa Prevatt.

Christa Prevatt, who has promised to give her murdered friend a voice, says closed circuit camera footage of Naiee Singh's final moments has b…

Even as we brace in anticipation of the world’s latest deadly flu—the coronavirus—another sickness has shown its alarming contagiousness: the tabanca virus.