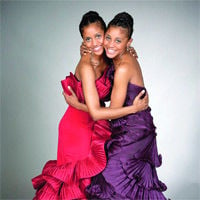 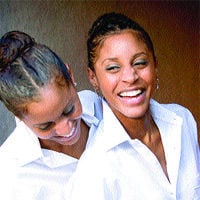 SHE bit into her bottom lip. Emotions swelled up insider her. She tried to contain it but couldn't hold it back. Karen Norman collapsed in tears. She couldn't find the words to express her admiration, gratitude and respect for the man who inspired much of her work. Her tiny frame shook with strong sentiment as she searched for the words to describe the tremendous impact legendary masman, artist and designer Peter Minshall had on her artistic development. Her twin, Kathy, the other half of the dynamic design duo, is in New York, listening to our conversation, on her cellphone. Their mother, Althea, set her gaze, outside a window, to hide her eyes but her cheeks were wet. "We wanted to call the presentation Tears but mom said it was too deep and dark for Carnival and no one would want to play a sad mas."

Karen explained, fastidiously, why their 2012 presentation, The Waters Seas of Consciousness, began life as Tears. Much of what she shared couldn't be printed. It was too personal and painful. "The entire story of the band developed around my US experience. Racism. I experienced it first-hand. I spent most of 2010 calling mom in tears." She took her pain to paper and began sketching. Together, Karen and Kathy, K2K Carnival, created a collection of 30 designs which they eventually compressed into eight; Birth-River Jordan, Growth-Sea of Galilee, Transformation-Caribbean Sea, Conflict-Ncome River, Rage-Red Sea, Ruin-Dead Sea, Redemption/Resurrection-Yellow Sea and Consciousness of Self-Saraswati River. "The colour spectrum is strong and very deep," said Karen. "The designs represent the psychological journey of man, growth, and the essence of self."

Their conviction is in their costumes. How to complete the epic task of turning a repertory of sketches into a Carnival band was their concern. Enter Roger Roberts of 3Canal. "He helped us make the concept cohesive," Karen intimated. He also walked them through Minshall's thought process. Their respect for Minshall began in Form Five when they undertook an exploratory study of the man and his art. The essence of Minshall lies in the depiction of The Waters. "The backpacks and the wings were inspired by Minshall's presentation at the Olympics," said Karen.

They provide a fascinating tenor to the Carnival experience. The creative composition of the work brings a stylistic element to mas that has been missing. The most avant-garde and fashion-forward presentation for 2012, it has the power to overwhelm. They combined the data and skill of two disciplines, costuming and fashion. Peter Minshall meets Alexander McQueen. Kathy couldn't just listen anymore. "The creative aspect of Carnival has been lost. By mixing Carnival with fashion, we are preserving what used to be but we are also pushing the envelope as we strive forward. Carnival is about presentation, theatre and fashion. That's what we are trying to bring back. Carnival is also about design, the wow factor, and being totally different."

Grounded in harmonious balance, joint devotion to art, and artistic diligence, they bring different assets to the production and unique qualities they admire in each other. They seek each other's counsel not only on their mas but on everything. They work, at the same company, in Midtown Manhattan, and live, together, downtown Manhattan, but grew up in Diego Martin, Victoria Gardens, where their parents reside. They have devoted great time, extraordinary effort, and an unusual energy to the craft of mas making, despite having full-time jobs and living miles away from Carnival's epicentre.

Graduates of Howard University in Washington DC, they hold undergrad degrees in International Business. Karen has a minor in Marketing and Kathy in Finance. "As children, they would draw but I never knew they really had a flair for art until their final year at Maria Regina when Sister Maria Margaret asked them to design the cover of the graduation programme," Althea recalled. "I can't even remember what we designed," laughed Karen. At St Joseph's Convent Port of Spain, they both obtained first class distinctions in Art at CXC. Karen placed first regionally.

At A'Levels, Karen pursued Economics, Math and Art and Kathy, Economics, Management of Business and Art. They both obtained an A in Art. Impressed by their talent, Cambridge kept their portfolios to use as instructional tools. "Cambridge kept everything," Karen affirmed. "We were shocked." Excited by their academic accomplishments, their hearts were set on becoming professional artists. Their father, Kenneth, didn't yield to their wish. "He didn't think it was a lucrative career so we ended up studying business. We tried to apply to a few architectural schools but we chose Howard because it offered us the best financial scholarships," Karen said.

The risk of birthing a new band and pushing it through the streets for Carnival was the least of their worries. The 32-year-old Normans are investment bankers. They live and breathe risk. But as the deadline approached for their launch Kathy had a major meltdown and flipped out of character. "She went crazy," said Althea. The contractor who promised to create the prototypes didn't deliver. "She was so frustrated by the lack of professionalism." Distraught, Kathy returned to New York where she and Karen frantically reworked the prototypes with all the relevant details by hand and had them ready for a photo shoot.

The prototypes were featured at Saut Trinbago. "I was amazed when I saw what they created," Althea expressed. "Mom has been a seamstress for years so I guess we just picked up what we knew from her," said Karen nonchalantly. Their ability to create prototypes with such savvy, style and sophistication showcase their great expanse of talent. What they delivered exceeded the most ambitious design fantasies.

But they would require additional assistance for the launch. Enter Ann-Marie Akeung, Ernesto Jardine, Jerry Valentine and Geraldo Vieira. "Were it not for them we wouldn't have had the backpacks and the headpieces. All of this was happening during the State of Emergency and the curfew. Ann-Marie pulled together a crew that slept at her house for three days," said Karen. Her face recounted every iota of exasperation and exhilaration experienced during those difficult moments.

The fabric choices are exceptional: Habotai silk, organza, leather, mesh and more, all adorned with crystals and fine bead work. Most interesting are the fanciful accents, congruent and integrated, which reveal enormous creativity, convivial expression, and open gesture. Their dad has been an importer and exporter of textiles for the last 49 years. In 2006, on a much smaller scale, they presented Dolce Vita, a small but successful section, in Poison. It piqued their interest. Pliant and patient, they waited until the time was right, to debut in full with a pronounced representation of self and consciousness. Their costumes provide considerable insight into who they are and what they believe as designers and artists.

This year is all about the look, the fashion and the mas. Lamenting that because of logistics they were unable to obtain sponsorship, Karen and Kathy hope it is not too late for a corporate sponsor to recognise the K2K Carnival brand is worth the investment. "Our design factor separates us from everyone else," said Kathy. They have attracted much attention and wooed and won the hearts of many masqueraders. And all concur that K2K Carnival has the ability to command love and loyalty.

K2K Carnival Mas Camp is located at the corner of Cornelio and Roberts Streets in Woodbrook. They can be contacted online www.k2k-carnival.com or 868-767-9655.

5 at dad and son’s Covid funeral