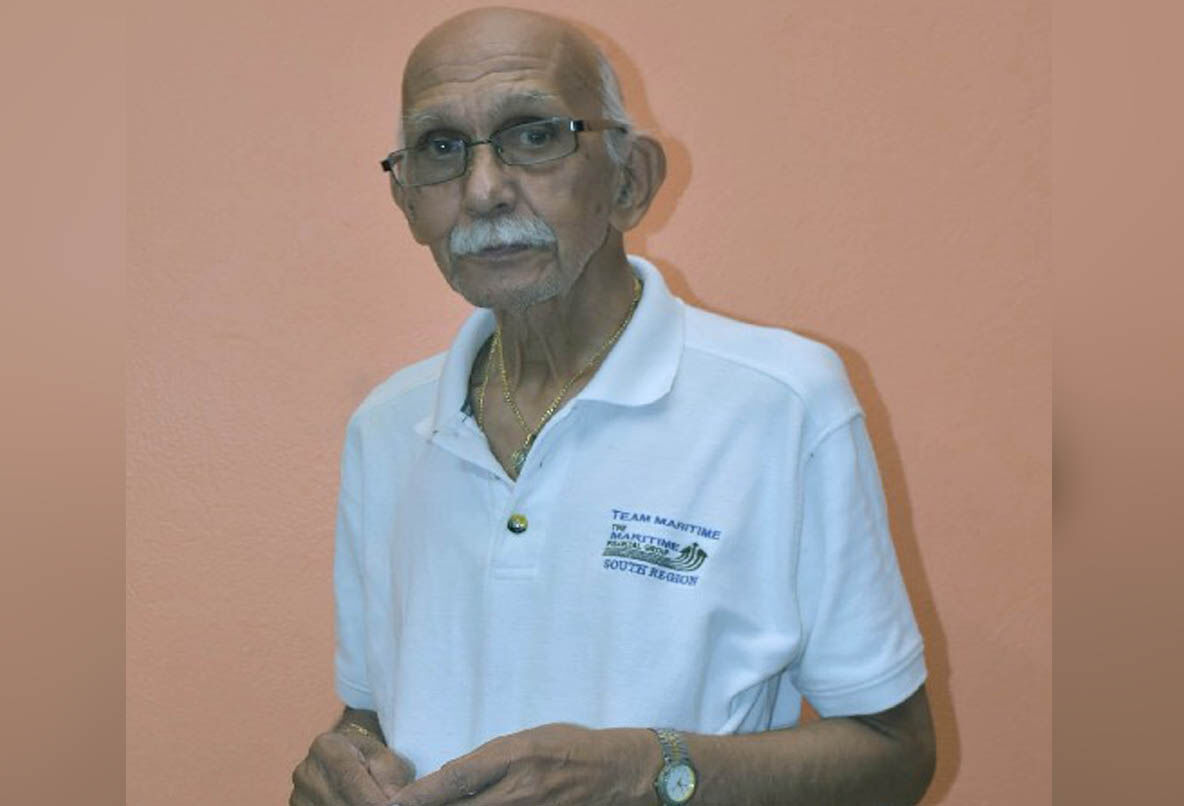 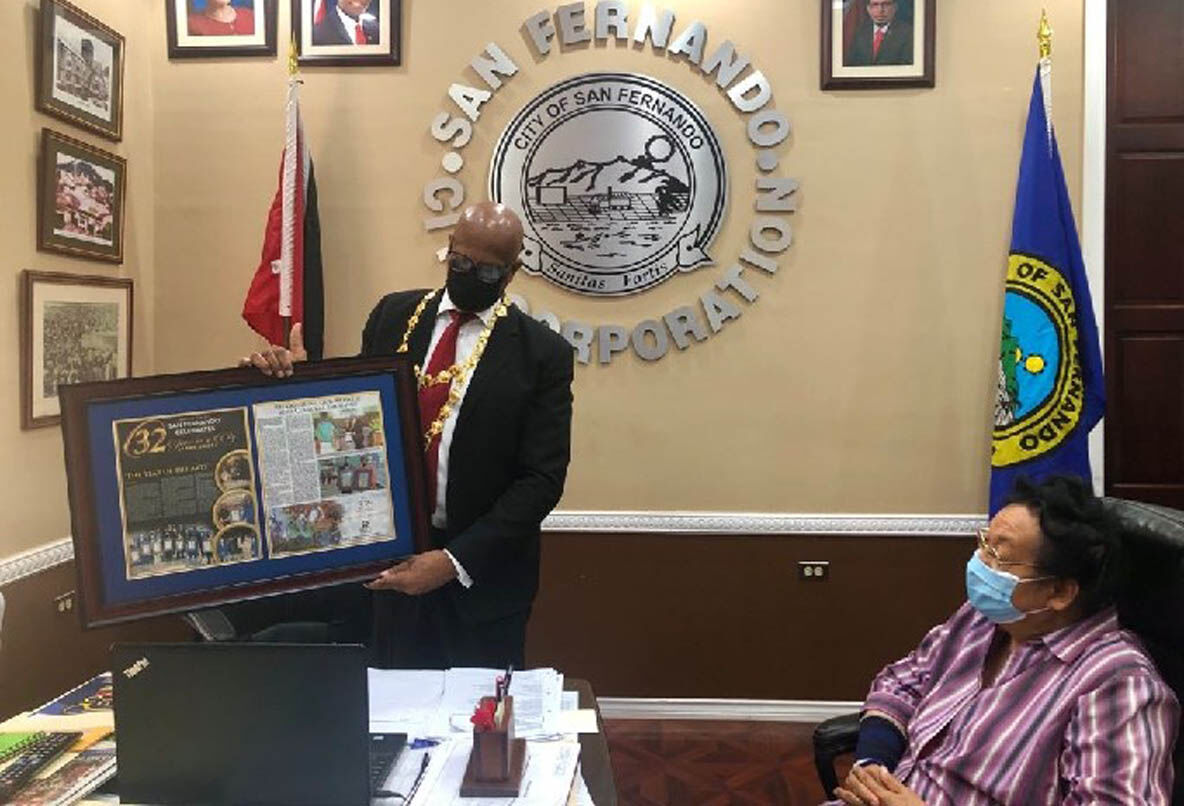 Remembering AN ICON: San Fernando Mayor Junia Regrello shows Fariza Mohammed, sister of Torrance, a plaque with images from the 32nd anniversary of the city of San Fernando, when the San Fernando City Corporation declared November 2020-2021, the Year of the Arts and honoured Torrance. Relatives visited the mayor yesterday to discuss his send-off. —Photo courtesy The Mayor of San Fernando

Remembering AN ICON: San Fernando Mayor Junia Regrello shows Fariza Mohammed, sister of Torrance, a plaque with images from the 32nd anniversary of the city of San Fernando, when the San Fernando City Corporation declared November 2020-2021, the Year of the Arts and honoured Torrance. Relatives visited the mayor yesterday to discuss his send-off. —Photo courtesy The Mayor of San Fernando

FORMER San Fernando deputy mayor Torrance Mohammed, who was attacked by a bandit on Monday, died at the San Fernando General Hospital on Tuesday night.

Mohammed, 90, died in the Intensive Care Unit where he was being treated for injuries he sustained during the attack.

A voice note by a resident who went to Mohammed’s assistance after the attack said, after waiting more than an hour for an ambulance to arrive, a friend of Mohammed placed him in his vehicle and took him to the hospital.

The witness said the incident occurred around 2.30 p.m. when Mohammed went to drop off fruit for a friend at Torrance Street in Mon Repos.

“While he was waiting at the front of the house, an East Indian man wearing a dark-blue jersey and a three-quarter khaki pants walked up to him, grabbed the gold chain off his neck and when Torrance tried to fight him off, he pushed Torrance to the ground, hard,” the resident recalled.

The woman said she contacted police and the officers called for an ambulance.

Photos of Mohammed moments after the attack circulated on social media, showing him sitting on the sidewalk, leaning on a resident who shaded him with an umbrella.

The woman in the voice note said police officers responded and took an initial report at the crime scene.

The woman in the voice note said: “We waited for the ambulance but almost an hour passed, and it did not come. So Derron (a friend of Mohammed) ended up taking Torrance in his car to the hospital. He got hurt on his back and his neck he was in a lot of pain. His hands were also hurting him because he fell on his hands and he could not move them properly and he had a small cut on his arm...”

The woman said a motorist attempted to chase the man who robbed Mohammed but the criminal disappeared in bushes near a hardware at Navet Road.

Police were given a description of the suspect.

They said an arrest is imminent.

his life to Sando

Mohammed’s sister, Fariza Mohammed, 81, said yesterday that they came from a close-knit family of 12 siblings and she had been praying for a miracle for him to recover.

On Tuesday morning she visited him at the ICU and prayed with him, but later at around 8 p.m., received the news that he had passed.

As she remembered her brother, Fariza reminisced about their younger days.

San Fernando Mayor Junia Regrello said many benefited from his passion, guidance and tutoring, and Mohammed’s legacy will live on.

“He epitomises the song ‘Trini to the Bone’. He did not see religion or race or anything like that; he was just a Trinidadian. That is the spirit you got from him.

Regrello said he was grateful that Mohammed knew a street was to be named after him.

“I had told him I have good news...He was happy and elated. We were planning to do the presentation and unveiling of the sign but the State of Emergency was declared at the same time. He told me that his birthday is in October and ‘let’s do it then’. But at least the good thing is that he knew that the street was to be named after him,” said the mayor.

It remembered him as an illustrious icon and cultural activist for over 50 years, who served in the capacity of producer, artistic director, choreographer, dancer, actor, tutor, and adjudicator.

Mohammed was awarded the Public Service Medal of Merit Silver in 1976 for his contribution to cultural development.

Also paying tribute to him on their Facebook pages were Minister of Tourism Randall Mitchell and Member of Parliament for San Fernando East Brian Manning.

Mitchell wrote, “Last night, Trinidad and Tobago lost another stalwart of the Arts. I am deeply saddened to learn of the passing of Torrance Mohammed, one of our country’s foremost dance pioneers. He was a well-known choreographer and a founding member of the Arawaks Dance Group, San Fernando Arts Council and the National Dance Association of Trinidad and Tobago. His work spanned beyond the arts industry with his 16-year tenure as a PNM councillor and his four-year term as deputy mayor of the San Fernando City Corporation.

“He was a treasured son of San Fernando and worked tirelessly to advance our culture.”

Manning wrote: “It is with a heavy heart that we must now say goodbye to yet another cultural icon of south Trinidad. Mr Torrance Mohammed, a master of dance who was loved and respected by all, has passed away under rather tragic circumstances. We are all heartbroken by this but we have with us many memories of his unmatched talent, his love for culture and the arts, his love for south Trinidad, his wisdom, his generosity and kindness to all. Mr Mohammed, you are indeed a hero and we will honour your memory”