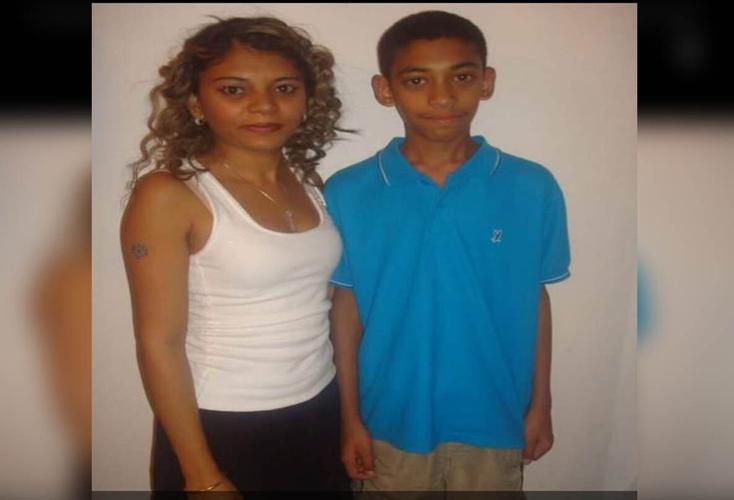 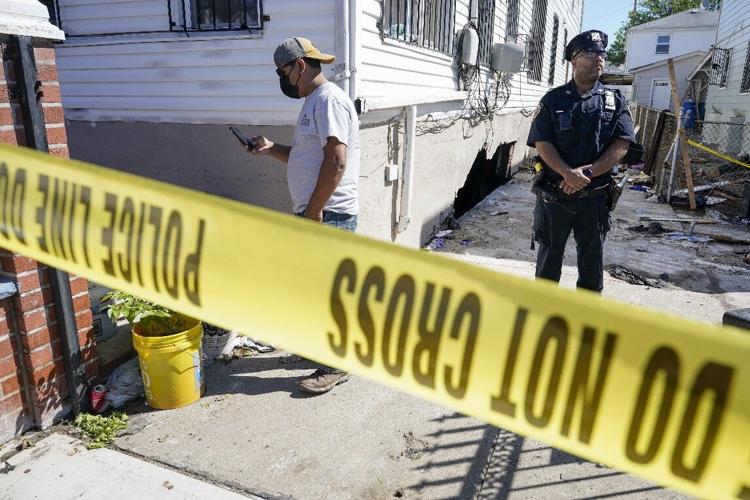 Tragedy: A police officer stands guard yesterday as a man surveys the damage to the home where the two Trinidadians died after their basement apartment flooded in the Jamaica neighbourhood in the borough of Queens, New York. The remnants of Hurricane Ida dumped historic rain over New York City, with several deaths linked to flooding in the region, as basement apartments filled with water and freeways and boulevards turned into rivers, submerging cars. See Page 21. —Photo: AP

Tragedy: A police officer stands guard yesterday as a man surveys the damage to the home where the two Trinidadians died after their basement apartment flooded in the Jamaica neighbourhood in the borough of Queens, New York. The remnants of Hurricane Ida dumped historic rain over New York City, with several deaths linked to flooding in the region, as basement apartments filled with water and freeways and boulevards turned into rivers, submerging cars. See Page 21. —Photo: AP

Shock and horror consumed the Gobin family of Bejucal, Cunupia, on Wednesday night when two of their relatives died in a flood in New York.

Around 10 o’clock on Wednesday night, Anjani and Gangaram Gobin received a call with the news that their grandson, 22-year-old Nicholas Ramskriet, had perished and their 43-year-old daughter Premattie Ramskriet was fighting for her life, after floodwaters broke through the walls of their basement apartment in Jamaica, in the New York City borough of Queens, USA. Premattie later died.

The remnants of Hurricane Ida had inflicted unprecedented rainfall on New York, leading to at least 12 deaths in that state alone.

Premattie’s husband, Dame­swar, and her younger son, 20-year-old Dylan, survived the disaster, but are still too shocked and distraught to speak with her equally broken parents.

Speaking with TV6 yesterday, Premattie’s close relative said just yesterday they had chatted via video with Premattie who hardly indicated any threat of Hurricane Ida.

“She video-called me to show me her nails; she loved to dress up. For Divali she would dress up, for Independence she will wear her red, black and white... she seemed upbeat and all she said was that there was a lot of rain,” the relative said.

The relative said Premattie and her family were attempting to flee when disaster struck.

“They were hearing the walls cracking and saw water seeping through. They were leaving the apartment, she went back for something... all a neighbour heard was a scream and water started to gush in with a force,” the relative said.

“There was no power, so it was pitch black. Her husband was able to grab and feel around for Dillon and pulled him out, but the force was too much. There was nothing he could do,” said the relative.

The neighbour she referred to was Mahen Singh, who told CBS News: “I was standing right here when the walls broke open and started gushing down. The next thing I heard was a loud scream. It was devastating, like I said I was right here. Nobody could get to them, they were very helpless...”

Dylan was born a year later and the Ramskriet family of four lived peacefully in their three-bedroom apartment home until Wednesday night.

Premattie was a homemaker, tending to her family’s every need.

Nicholas was getting ready for college and his passion for cars was reflected in the scores of model cars lining the walls of his room.

Relatives fear for Anjani and Gangaram as they come to terms with losing their eldest child and grandchild, particularly Gangaram who is blind and suffers from ­kidney failure. The pensioners last saw their daughter when she visited in 2019, but their relationship was kept alive with daily video calls.

Despite being fully vaccinated, the elderly couple has already decided against travelling to New York for the last rites.

The relative said they will remember the mother-and-son duo for their unbreakable bond.

It was always, as Nicholas posted to Facebook years ago, “Mom and I”, the relative added.

“They were about to leave the apartment,” the relative said. “She went back for something. She always used to say she could not live if anything ever happened to her children.”

It is still unknown if Premattie went back to retrieve Nicholas or if he followed her back as a dutiful son would.

As the Gobins grieve, mentally replaying the tragedy and horror of their loved ones’ last moments, they accept that every extra instant spent in that basement apartment was a gamble between life and death.

A 41-year-old construction labourer faced the court on Tuesday, charged with the sexual touc…

How will Venezuela be compensated for Dragon gas?

Twenty-two-year-old Emmanuel John faced a Couva magistrate on Wednesday, charged with the mu…

CARACAS, Feb 2 (Reuters) - Venezuela's President Nicolas Maduro on Thursday lashed out at U.…

Cholai, 58, was blanketed in white sheets at the funeral service, which was performed under Muslim rites.