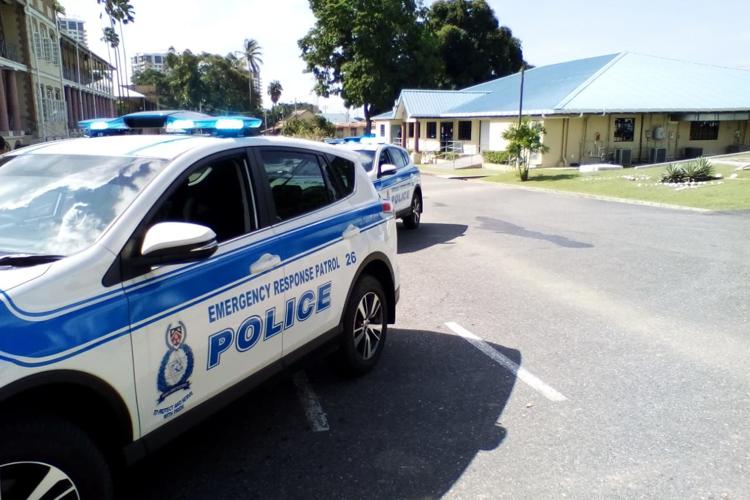 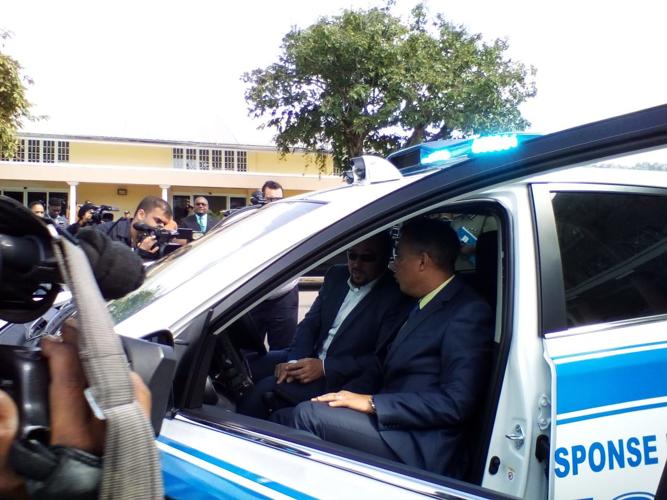 National Security Minister Stuart Young and Police Commissioner Gary Griffith examine the technological assets in one of the ERP vehicles.

COMMISSIONER of Police Gary Griffith has launched a new unit which enables officers to use non-lethal weapons like tasers and pepper spray.

He rolled out another new initiative after fewer than 100 days in office at the Police Academy in St James yesterday.

At the launch, Minister of National Security Stuart Young said 'the Government is quite aware of the type of fire-power and the type of illegal firearms' being utilised by criminals.

Griffith said GPS on vehicles would not only ensure vehicles aren't stolen (as has occurred in the past), but would also be used to track the location of officers from two new centres.

They will be used for real-time analysis of intelligence.

Additionally, Griffith announced the revamping of the E999 unit to assist with public distress calls.

This new unit will be called the Emergency Call Centre (ECC999) unit.

Griffith said: 'Citizens would no longer have the concern that when they call 999 they have to wait for 20-odd minutes to get a response, and then 999 unit would have to contact a police station to get a police vehicle to respond.'

Instead, he stated this new ECC999 unit will be directly linked to the EPR unit, and it was promised officers would respond in a matter of seconds.

It was also noted the use of notepads on the vehicles' dashboards will soon be equipped with licence plate recognition abilities and will be used to improve aspects of facial recognition, fingerprinting, and will be able to identify whether a citizen has a criminal record via the scanning of driver's permits.

These new gadgets will not be given to every member of the TTPS.

Officers attached to the EPR unit will be the only ones assigned to use the devices.

Griffith strongly advocated for the minimum use of force policy and, as such, the use of firearms should now be used as a last resort.

Both Griffith and Young agreed that by using intelligence with policing, and the utilisation of proper technology, the TTPS will ensure safety for all law-abiding citizens.

The aim of this new initiative will prevent crime and remove the fear of crime from citizens, Griffith said. Thus far, both the Western and Port of Spain divisions have implemented these units.

Griffith said: 'Citizens have been calling for better service from the Police Service, and I assure you that we are listening.'

He also addressed the issue of public protests, stating citizens can protest at any time and will receive his full support, once it does not infringe on the rights of other citizens.

However, unlawful behaviour such as blocking roads, throwing debris and burning tyres would not be tolerated on his watch.

There was celebration in the prison system yesterday, when a resident of the Youth Training and Rehabilitation Centre (YTRC) qualified for the National Calypso Monarch competition.

Romel Lezama’s entry into the Monarch arena marked a first in the history of Trinidad and Tobago Carnival, a release from the Prison Service stated yesterday.

AN intense battle between Central Trinidad and eastern Tobago played out in front of a near-sold out audience yesterday, when the National Panorama semifinals returned to the Queen’s Park Savannah, Port of Spain.

IT may forever be a mystery how much hydrocarbon was pumped out of No. 36 Sealine on Berth 6, Pointe-a-Pierre, and how much air was available to the four LMCS divers before they died last February.

In a written response to the Commission of Enquiry on January 27, Paria’s general manager Mushtaq Mohammed said the critical piece of information could not be ascertained because Sealine 36 was connected to a 50-inch pipeline, Sealine 66, before the contents were emptied into Storage Tank III.

HOPE IS NOT LOST

ALL hope is not lost.

The Government has a lifeline in the form of a recent Privy Council ruling to which it can turn to have the $20 million default judgment granted in favour of nine former murder accused for malicious prosecution set aside and have the civil trial started afresh.

Four fishermen left their homes in Mayaro last Tuesday and set sail on a five-day fishing expedition. But something went wrong and the pirogue overturned off the coast of Cedros.

The vessel, a 32-foot pirogue, was spotted by fishermen, partially submerged in the sea, yesterday. The men were not inside.

A search was underway last evening for boat captain, Heeralal Linus Kooblal, 53, and his crewmates. The men have been identified as Rishi Khemchan, Andy George and “Tallman”.