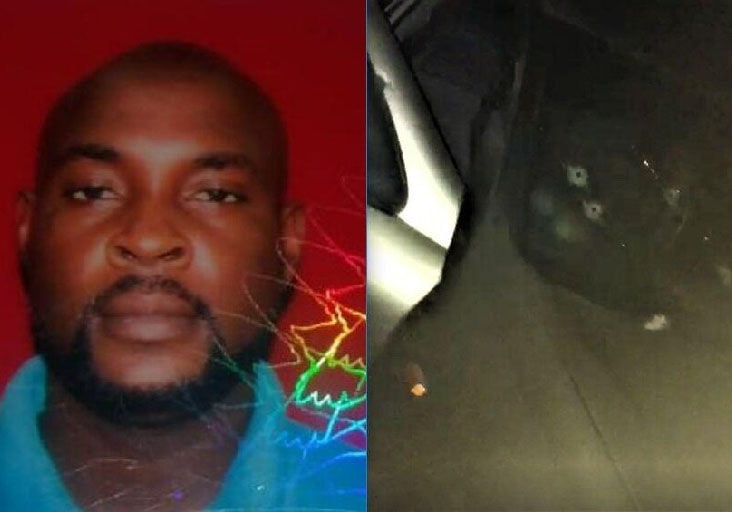 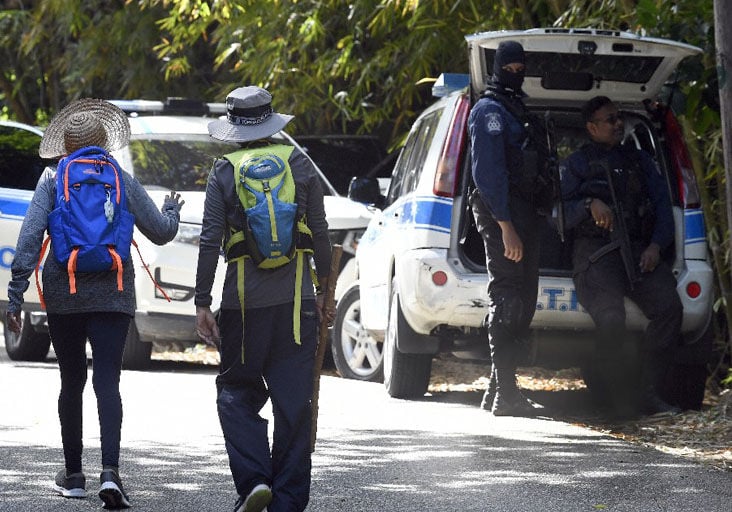 GOOD MORNING, OFFICERS: Fitness enthusiasts extend morning greetings to members of the Police Service on Lady Chancellor Hill yesterday. The body of a suspect was recovered at the scene following a police shooting.

GOOD MORNING, OFFICERS: Fitness enthusiasts extend morning greetings to members of the Police Service on Lady Chancellor Hill yesterday. The body of a suspect was recovered at the scene following a police shooting.

“It was an absolute miracle that no innocent people were injured or killed.”

These were the words of a senior officer when speaking to the Express yesterday following a confrontation between two men and an off-duty police officer on Wednesday night along the Lady Chancellor Road in Port of Spain.

The two men were killed by the cop in this incident, while a third suspect is in police custody.

Police said a 33-year-old police constable was walking along Lady Chancellor Road, popularly known as Lady Chancellor Hill, with his girlfriend around 7 p.m., when they saw three men in a gold Nissan Almera looking at them.

One of the men got out with a gun and fired on the officer.

The officer fired back at the man who was standing near the car, wounding him. The other two men ran.

The injured man was taken to the Port of Spain General Hospital, where he died.

He has been identified as Franklyn De Freitas, of Richplain Road, Diego Martin.

Wednesday was his 35th birthday.

Task Force officers, under the supervision of ASP Bhagwandeen and Insp Yearwood, searched the area.

While this was being done, a man who matched the description of one of the suspects reported to the hospital, seeking treatment for gunshot wounds.

He is now under police guard.

The third suspect was found dead yesterday morning in a busy area off Lady Chancellor by officers of the Port of Spain Task Force.

Up to last night, he was yet to be identified. However, police have intelligence that he was also from the Diego Martin community.

This is the first police-involved homicide for the year.

Senior officers noted that at the time of the shooting, other citizens were walking along Lady Chancellor Road.

“From our intelligence, at the time there were other people along the roadway, so it was not as though it was a lonely or isolated area. The officer was targeted, and shot at, when other people were around. This is alarming because it means this situation could have easily turned into something else,” an officer said.

Second attack on police in 2 weeks

He noted this was the second such attack in under 14 days, the first incident involving a 50-year-old police corporal who was shot at on December 27 by unknown assailants in St Joseph. In that incident, the officer was grazed on his neck when his attackers shot at him.

“The association notes with concern that this is the second such attack on members of the Police Service in about 14 days. Thankfully, in both cases, there were no serious injuries. However, the brazenness of the attacks has left us alarmed, and led us to wonder what could be the motive behind these shootings, and if our memberships are being deliberately targeted.

“We will await the outcome of the investigations to give definitive answers. However, till then, we are pleading with the membership to be vigilant,” Dickson said. The ASP also called on citizens to be careful with the information they spread on social media.

“I was alarmed to see information passing around regarding the victims involved, and the ease at which it was being shared. The association appreciates the public’s need to be informed. However, there are lines to be drawn and must be adhered to.

“The names of victims, in this case a police officer and his girlfriend, should not have been made public. This is because in the same manner in which information is being forwarded, it can be shared with criminal elements who also lurk on group chats, eagerly awaiting the dissemination of such information so they can act on it.

“So again, we are asking the public to be mindful and careful, and to safeguard the watchmen who look after their country. To this end, the association wants the membership to know that we will be engaging with the Commissioner (of Police Gary Griffith) soon, over what proposals could be enacted, and how best we can move forward for such scenarios,” Dickson said.

When the Express visited the Richplain community yesterday, residents of the area said they were shocked to learn of De Freitas’ involvement in the shooting.

“He wasn’t a saint, by any means. He had his moments and run-ins (with the law). But to say he was a hitman or a shooter or something like that, I never saw him like that. So when we see the media saying that he was a hitman and things to that effect, it doesn’t sit well with me.

“Then again, you can’t put your head on a block for everyone. All I can say is that his friends were planning a small lime in the area for this weekend for his birthday (which was Wednesday), so I know they are going to take it a bit hard,” one resident told the Express.

Imam Sheik Nazrudeen Mohammed, head of the Tableland ASJA Masjid, has died from the Covid virus.

The May death toll of 66 people includes the tragedy of two sisters dying days apart, a police officer and a Point Fortin Borough Corporation driver, among others.

COVID-19 claimed the life of a 49-year-old acting inspector of police yesterday bringing the total to two police officers who have died as a result of the on-going pandemic this month alone.

Dozens of people rushed to public healthcare facilities across the East-West Corridor yesterday to get tested for Covid-19 as the virus continued its aggressive spread.

As Covid-19 cases continue to sky-rocket, the Ministry of Health has taken steps to increase bed capacity at hospitals and step-down facilities to ensure sufficient space is available to treat Covid-19 patients.

President Paula-Mae Weekes has urged citizens to emulate Muslims and exercise self-restraint and make personal adjustments to assist in the Covid-19 fight in this country.