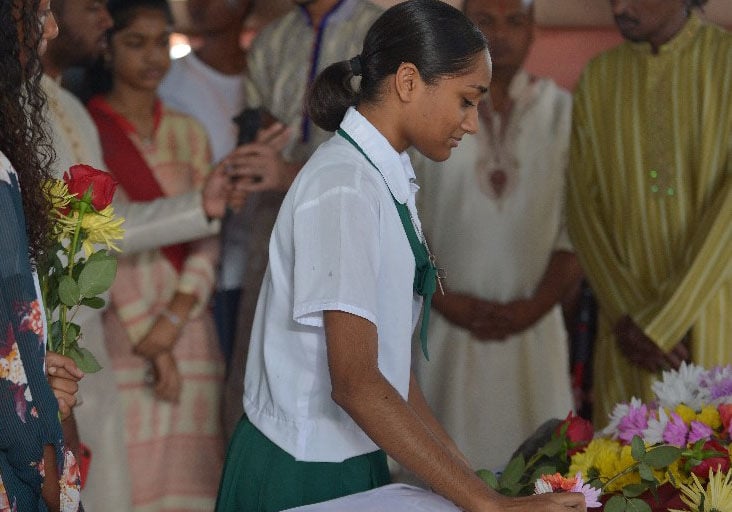 ROSES FOR RESHMA: A classmate at Barrackpore ASJA Girls’ College place roses on the coffin of accident victim Reshma Rambarran during the funeral yesterday at the family’s home at Jaipaul Steet, Ste Madeleine. Reshma died at hospital on Friday following the accident the previous afternoon. —Photo: DEXTER PHILIP 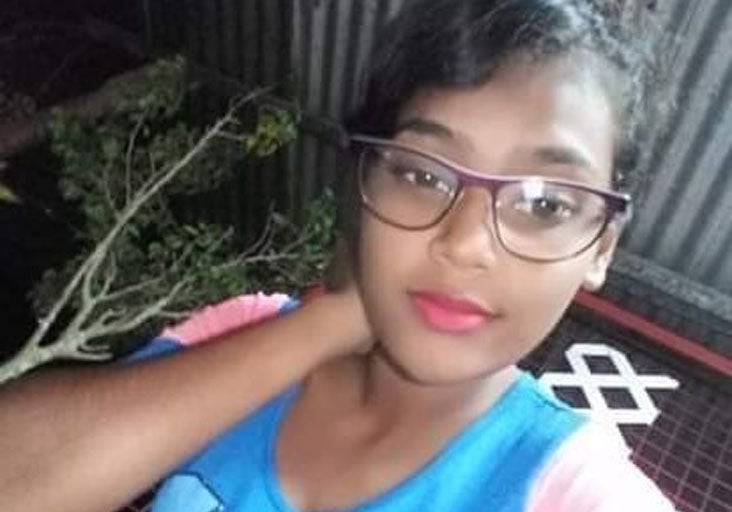 ROSES FOR RESHMA: A classmate at Barrackpore ASJA Girls’ College place roses on the coffin of accident victim Reshma Rambarran during the funeral yesterday at the family’s home at Jaipaul Steet, Ste Madeleine. Reshma died at hospital on Friday following the accident the previous afternoon. —Photo: DEXTER PHILIP

Rambarran, a fifth form pupil of ASJA Girls’ College, Barrackpore, became the fifth road fatality for 2020 after she was critically injured in a crash on her way home from school last Thursday.

Her uncle longed to see his niece smiling again, even if it meant giving up his own life.

Speaking to the Express after the funeral service, held at her parents’ home in Ste Madeleine, Roberts said: “I witnessed everything. I was five vehicles behind the vehicle my niece was travelling in. Just seeing what happened and not knowing it was my niece involved in it at that time...it is so hurtful.”

Roberts cautioned drivers to be more vigilant on the nation’s road and to practise road safety.

“As drivers we are seeing it every day on the TV, we are seeing cars crash and innocent people’s lives just going and we still going the same way. We don’t seem to care because we still driving the same way. If I could turn back time…father God, yuh hear me now, I willing to give up my life for this little child. Let she live and see what this life is about. Let her be able to achieve some goals or something. Look another innocent life gone,” he said.

Roberts recalled his last conversation with his niece, which also turned out to be final hours of the teenager’s life.

“The last thing I heard she telling her mom is that she did not want to go to school. It’s good to follow your mind sometimes.”

Despite the tragic outcome, Roberts wanted to use this experience as a wake-up call to other drivers.

“I saw when the vehicle gave them a ‘bad drive’, he was able to avoid one car but the three-tonne (van) came the same time and pick them up.”

After the accident, Roberts said he went home and told his family about the horrendous accident he had just seen, not knowing his niece was in the wreckage fighting for her life.

It was a battle the teenager lost in the end.

Rambarran, who was also fondly called “Cookie” by friends and loved ones, had aspirations of becoming a nurse.

“I think the country has lost a bright young woman who would have definitely made a difference in the lives of so many people,” said Hosein.

“You can tell the character of somebody when at such a young age they would have already agreed that they want to live their life to care for others. That tells you so much about that person’s upbringing. It also tells you so much where their heart is.

“This loss is a tremendous one. I know that it will be one that the family would feel for many, many years, it is not something you ever recover from, especially in the manner it happened.”

Hosein called on the community to rally around the family and support them during this difficult time.

Classmates of the teenager and the school principal also conveyed their sympathies to the Rambarran family.

Her sister Shoba gave the eulogy and described her sibling as a “Daddy’s girl” with a brilliant mind and personality to match.

Pundit Athma Maharaj took a moment to urge parents to play a more active part in their children’s lives, especially during their formative years.

“Death is a common denominator in everyone’s lives. This is a message for all of us. No matter what age you are, life is very fragile,” he said.

A schoolgirl and her 'driver' dead: Mom wants the truth

A heartbroken mother wants to know the truth of her daughter’s death.

Annie Rambarran, the mo­th­er of 16-year-old Reshma Ram­­barran, wants to find out what her daughter was doing in a vehicle with a 44-year-old man when it crashed, killing her daughter.