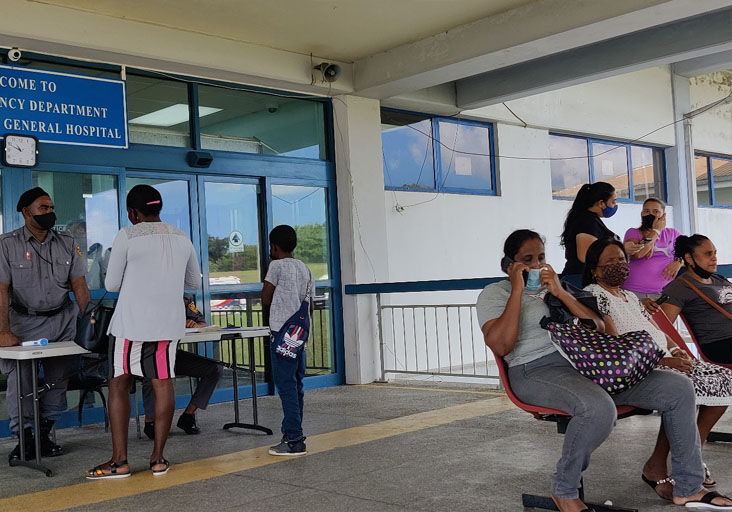 FIRST STOP: A woman gets information from a security officer at the entrance to the Emergency Department of the San Fernando General Hospital on Wednesday. 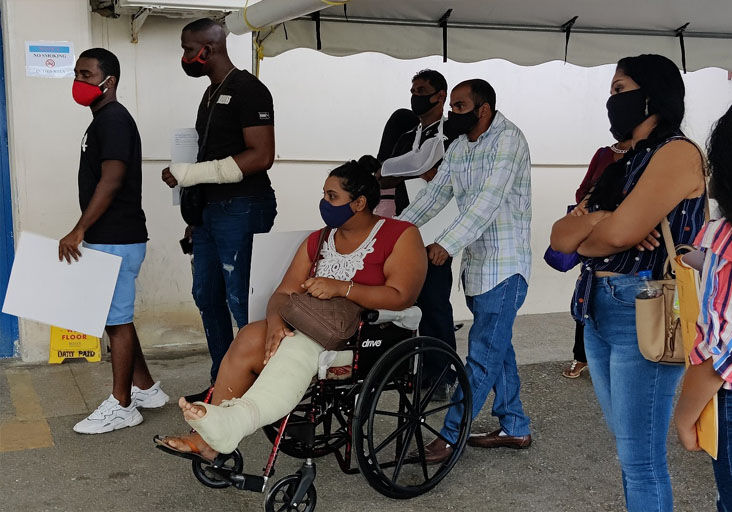 Triaged on need basis: Patients stand in line at the Accident and Emergency Department at the San Fernando General Hospital. 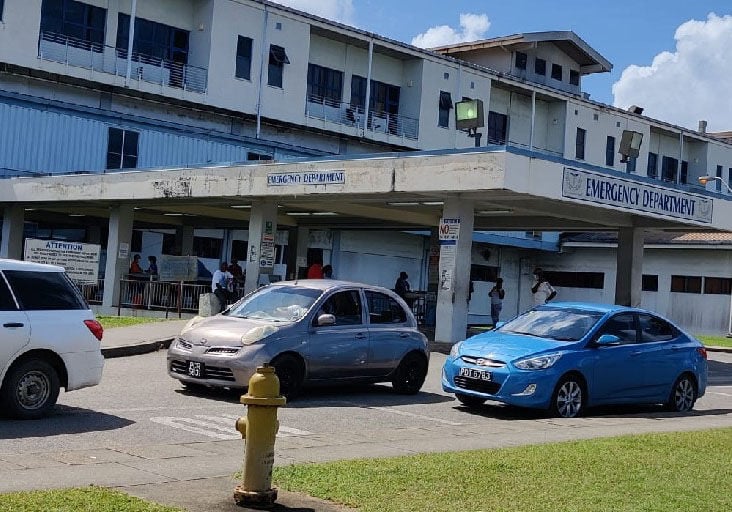 FIRST STOP: A woman gets information from a security officer at the entrance to the Emergency Department of the San Fernando General Hospital on Wednesday.

Triaged on need basis: Patients stand in line at the Accident and Emergency Department at the San Fernando General Hospital.

The Sunday Express visited the Accident and Emergency (A&E) Department at the SWRHA on Wednesday and observed more patients waiting on a doctor.

They say this has become routine.

One outpatient shrugged his shoulders and looked to the sky with a forlorn expression on his face.

He said, “What can I do? Every time I come here, all I do is wait. It’s been this way for years.”

Waiting for two, four, or even six hours a day on a chair in pain for medical care at public health institutions is the norm, some patients in Accident and Emergency said.

A man who had brought his 89-year-old mother to the hospital on Tuesday around 6 p.m. says she did not get a bed until 4 a.m. the next day.

The man, who preferred to not be identified said, “(Doctors) called me today and said they would discharge my mom this morning. I’ve been here since 9 a.m. It’s almost lunchtime still no word when she would be released. It’s horrible. I just have no words to express how I feel.”

A woman told the Sunday Express she came to the hospital at 6 a.m. on Wednesday, and up until lunchtime still hadn’t seen a doctor.

She said, “The entire system is poor and it’s not because of Covid-19. We have had this problem for a long time now. It all comes down to management.”

Another woman waiting to pick up a relative at the A&E Department said: “If you’re not unconscious or bleeding, forget it. Be prepared for a long wait.”

The SWRHA admits waiting times have increased at the institution over the past two weeks.

But it says the situation is being monitored and managed with daily attention to discharges, bed statistics and client feedback.

“Three weeks ago, the NCRHA made a concerted effort to resume the clinics for outpatients who had surgeries, Covid or no Covid, as we understand how important follow-ups are, and we thought this would have made patients happy.

“But we keep seeing negative articles popping up, especially on social media, which has left the staff dumbfounded,” he said.

The board of the NCRHA also met in emergency session last Monday afternoon and ordered an immediate audit of all outpatient clinic appointments.

As for the situation in South, the SWRHA said its Emergency Departments utilise the Canadian Triage Acuity System (CTAS), where patients are triaged based on their need for care.

In a statement on Thursday, the Authority said its most urgent cases are attended to- first on priority.

It is not based on a first-come, first-served basis.

“Triaged patients with co-morbid challenges generally experienced longer wait time due to consultation with a myriad of varied medical professionals of different expertise,” the SWRHA added.

The SWRHA said it will be gradually returning to normal theatre services earmarked to return to full operations from February 1.

Alternatively, during the onset of the pandemic, SWRHA said it transitioned to telemedicine services, in which doctors and patients consult via the telephone on an appointment basis.

“While the hospital cannot nullify patients who have had to wait several hours to get a bed”, the SWRHA said its bed admission management system reduced patients waiting for a bed for more than eight hours and 24 hours to almost nil.

As for surgeries, the SWRHA said while there exists a shortage of anaesthesiologists before the pandemic, the administration of the existing complement of staff... has not sufficiently impacted on patient care to disrupt service.

His sentiments were echoed by Fyzabad MP Dr Lackram Bodoe and Dr Stephen Ramroop, who holds an MBA in healthcare management.

In a phone interview with the Sunday Express last Wednesday, Dr Chattergoon said, “I think the healthcare sector is in a mess. Although the honourable Minister of Health has talked about the parallel healthcare system, in reality, it has not worked. A parallel healthcare system meant that the hospitals would continue functioning normally, and that is not happening. Doctors working at the San Fernando General Hospital are the same doctors, who are also being asked to cover the Augustus Long Hospital. The SWRHA does not have enough doctors to cover all these institutions and still provide a regular and reliable service at the San Fernando General Hospital.”

Dr Chattergoon believes medical staff are being stretched to their limits.

And Dr Bodoe argues that there are inefficiencies at various public health institutions across the country.

He said, “Lack of supplies, broken and non-functioning equipment, long waiting times for clinics and surgeries are all management issues, which need to be fixed regardless of Covid-19. The Minister of Health is ultimately responsible and needs to ensure the boards appointed under his watch have the required expertise and experience to provide proper direction and oversight for the RHAs.”

A former medical director at SWRHA, Dr Ramroop was also a former head of the Emergency Department at the institution.

He said, “One of the key problems we have in this country is putting square pegs in round holes to manage the health sector.”

Apart from battling through a pandemic, Dr Ramroop said the country’s growing Spanish-speaking population is also putting an extra burden on the local healthcare system.

Though the SWRHA covers south of the Caroni Bridge, people outside the area still come to the hospital for treatment, Dr Ramroop said.

“It is important for CEOs and RHA boards to develop a suite of performance indicators to allow them to focus on what are the priorities, especially during a pandemic. A person with cancer of the breast should not have the same wait-time of someone coming in for a bunion of the toe,” he said.

Dr Ramroop said the elderly are extremely vulnerable if they solely depend on public health institutions for medical care.

The Sunday Express spoke to the attorney to find out what patients can do if faced with possible medical negligence matter at one of the public hospitals.

The senior attorney recalled a case in which his law firm won against a public health institution after a doctor from overseas agreed to testify in the case.

“It is a costly exercise. How many people would be able to afford that?”