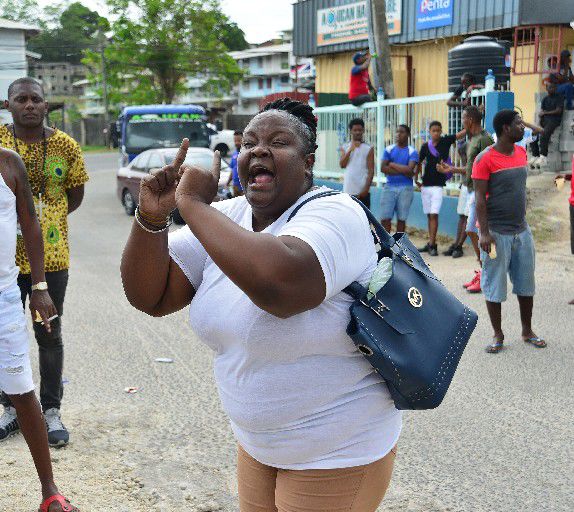 knows the feeling: Michelle Rojas expresses her emotions during yesterday’s protest in Morvant over the killing of three men by police on Saturday evening. Rojas’s son, Brandon Rojas, was also killed by police on March 16, 2020 at his home in Morvant. 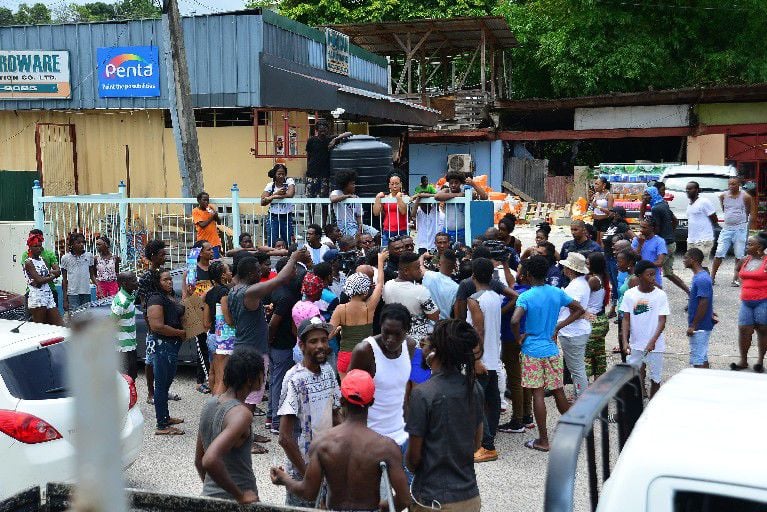 by the numbers: Morvant residents gather yesterday after protesting the police killings.

knows the feeling: Michelle Rojas expresses her emotions during yesterday’s protest in Morvant over the killing of three men by police on Saturday evening. Rojas’s son, Brandon Rojas, was also killed by police on March 16, 2020 at his home in Morvant.

by the numbers: Morvant residents gather yesterday after protesting the police killings.

That was the rallying cry of friends and relatives of the three men killed by police on Saturday as they staged fiery protests in parts of Morvant between 11 a.m. and 5 p.m. yesterday demanding justice for the killings.

Protesters, who were joined by an aspiring politician and another activist, compared the deaths of the three with the death of African-American George Floyd.

On May 25, 2020, 46-year-old Floyd was killed in Minneapolis, Minnesota, during an arrest for allegedly using a counterfeit bill.

Derek Chauvin, a white police officer, was video taped kneeling on Floyd’s neck for almost eight minutes while he was handcuffed and lying face down, begging for his life and repeatedly saying, “I can’t breathe”.

While “I can’t breathe,” has become a rally cry for the Black Lives Matter (BLM) protests that followed worldwide, friends of the Morvant three quoted one of the men who allegedly told the police on Saturday, “I living right dey,” meaning he was innocent.

Rubbish was burnt until the police and officers from the Morvant Fire Station responded and quelled both the protest and the blaze.

The protest began again around 2 p.m. along the Lady Young Road near Jumans Avenue.

There they were joined by Kirk Waithe of the newly-formed party the Nationwide Organisation of We the People (NOW) and activist Garth Christopher and Acting ASP Roger Alexander, host of TV6’s Beyond the Tape showed up as well.

No rubbish was burnt this time but approximately 50 people stood at the side of the Lady Young Road near Juman’s corner shouting and clapping: “I living right dey”.

Justice will be served

Commandeering a PA system, Alexander addressed protesters, giving them an insight into how police investigations work. He also sought to clear his name after some protesters insisted he was among the officers who shot the three men on Saturday.

“We hear you. The Commissioner of Police and the executive of the TTPS have launched an investigation into this situation here and anyone who has some information that would help this investigation should come forward without delay,” he said.

“There is also the PCA (Police Complaints Authority) here that could assist with the investigation.

“I want each and every person to be rest assured that justice will not only be served but you all will have a total account of what took place here,” he added.

Asked about the video footage that emerged after the men had been shot showing them with their hands in the air, Alexander replied: “That’s part of the evidence and in order to complete the whole picture we have to examine everything because sometimes you may have a camera and it only shows you a part of the story.”

The protest died down for a bit but around 5 p.m. residents of Second Caledonia, Morvant, began moving traffic barriers and garbage as they attempted to block the Eastern Main Road near Morvant Junction.

Within minutes of starting it was shut down by the police who prevented the protest from getting bigger by ordering people off the road.

Hands up, then shot

This is the question being asked on the heels of the police killing of three men in Morvant on Saturday and the release of two videos.

A somewhat fuzzy video surfaced on social media on Saturday night showing the police encounter with the men and what seemed to be one of the men with his hands up in the air.

Protesters took their anger out on both the Commissioner of Police and a deceased labour leader and politician yesterday.

Mother at funeral: I can’t take it

A woman who recovered from the Covid-19 virus, died days later.

The Covid regulations allow hardware stores to operate as an essential service, but one of t…

TRINIDAD and Tobago yesterday broke its own dreadful record for Covid-19-related deaths, with the Ministry of Health reporting an additional 21 fatalities over 24 hours.

The death toll placed T&T in the unenviable position of leading the Caribbean for the most fatalities in a day, ahead of Cuba with 18 deaths in one day.

However, Cuba’s population is more than 11 million people compared to this country’s 1.4 million.

PRIME Minister Dr Keith Rowley has accused the Opposition Leader of shamelessly trying to “tief” credit for two Covid-19 field hospitals donated by the government of the United States.

In a post yesterday on his Facebook account, “Dr Keith Rowley”, the PM said Kamla Persad-Bissessar and the United National Congress (UNC) were also disrespecting the intelligence of the population.

As the country recorded its highest number of Covid-19 deaths yesterday, Opposition Leader Kamla Persad-Bissessar slammed Prime Minister Dr Keith Rowley for boasting that two field hospitals from the United States set up in Couva were the result of talks last year.

Imam Sheik Nazrudeen Mohammed, head of the Tableland ASJA Masjid, has died from the Covid-19 virus.

Mohammed, 70, passed away at Augustus Long Hospital, Pointe-a-Pierre, on Wednesday, shortly before the new moon was sighted confirming the observance of Eid-ul-Fitr yesterday.