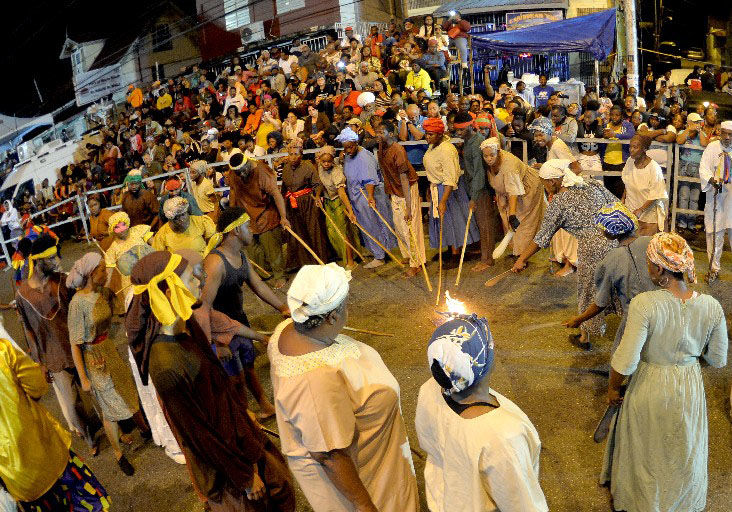 READY TO FIGHT: Stickfighters bless their bois before battling members of Captain Baker’s constabulary during Friday’s re-enactment of the Canboulay Riots at Piccadilly Street, East Port of Spain. 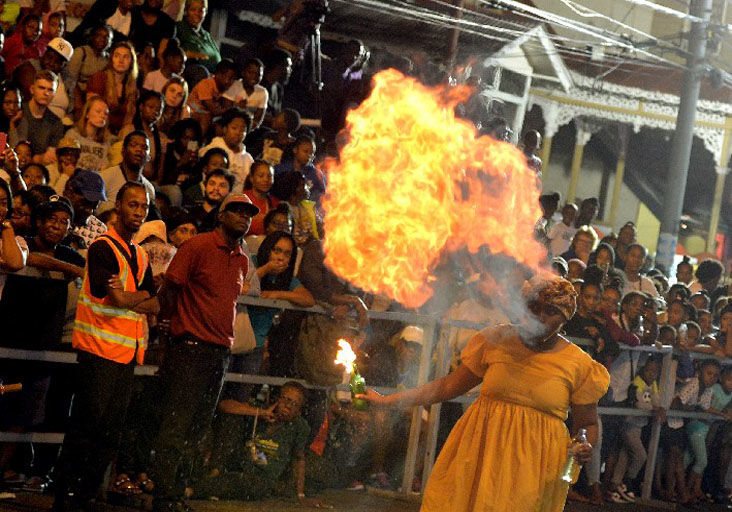 READY TO FIGHT: Stickfighters bless their bois before battling members of Captain Baker’s constabulary during Friday’s re-enactment of the Canboulay Riots at Piccadilly Street, East Port of Spain.

While Carnival Tuesday will see masqueraders across the country blooming in full costume, Carnival Monday now holds its own as the ‘Monday wear’ fashion industry also takes shape.

The feteing began in earnest a fortnight ago, as T&T started welcoming visitors from around the world and the region.

The past week saw the crowning of a new Soca Monarch — as Iwer George took the Power position with “Stage Gone Bad” — also considered this year’s hottest Road March contender.

But Carnival Monday means mud and even before the break of dawn, thousands of Jouvert players would have camouflaged themselves in mud and paint of every colour, preparing to prance and dance along the streets.

They will be joined by renditions of every Carnival character imaginable, including the loved-and-feared “blue devils” that typically cause fright among children.

By midday, most revellers would have returned home to clean and up and hit the streets again, this time headed to numerous fetes or, simply to maximise the season by hanging out at popular party strips, including Ariapita Avenue in Port of Spain.

Motorists have also been advised of changes to the flow of traffic per district, including Port of Spain, where arrangements went into place in Woodbrook last Thursday.

Expect an explosion of colour on Carnival Tuesday, as the country’s mas bands, big and small, vie for centre stage in their various localities.

North, Central, East and South Trinidad are all home to large mas bands looking to take the titles in their districts.

Masqueraders will be in full costume and, in the North, will assemble before dawn at mas camps and the Queen’s Park Savannah.

Large bands in Port of Spain include Tribe and Bliss, which are expected to also bless the Socadrome at the Jean Pierre Complex, when patrons are invited free of charge to take in performances ranging from calypso legend David Rudder to soca star Lyrikal (Devon Martin) - who copped second place in last Friday’s Soca Monarch competition with “Rukshun”.

The Socadrome opens at 7 a.m. and the show runs until 8 p.m.

Parades at the Savannah, Socadrome and South Quay will be streamed by various media, with the Socadrome going live on CCN TV6.

The National Carnival Commission (NCC) has posted the parade routes for senior and junior masqueraders to its website, which features appointed routes for bands headed to the Socadrome and Piccadilly Street, Port of Spain.

Masqueraders, spectators and motorists are advised to visit the site, as the map also features the locations of muster points and medical facilities.

The best Carnival is a safe one.

As such, the authorities have urged not only personal responsibility but that citizens also look out for each other and be especially vigilant with children.

In an effort to keep the festival as incident-free as possible, the Trinidad and Tobago Police Service (TTPS) two weeks ago announced a ban on glass bottles that would have gone into effect from 4 a.m. today, until midnight tomorrow.

This means that only licensed persons will be allowed glass bottles in public spaces, and according to the legislation, “no one other than an authorised person can serve or consume a beverage from a glass bottle in or within the vicinity of a Carnival event in any public place”.

These include licensed liquor vendors, employees of such, a server with a registered Carnival band, those licensed for special events, vendors with food badges and public sanitation workers.

National Security Minister Stuart Young yesterday asked the public to be “responsible” and to “listen to our law enforcement officers as we all need to work together to make it safe”.

“We have worked hard at planning for a safe carnival,” Young told the Express.

He said months of planning would have gone into the festival, including, for the first time ever, a glass bottle ban.

This move, in combination with the TTPS and the Trinidad and Tobago Defence Force, along with intelligence, “are working to provide a safe and secure environment”, Young said.

Commissioner of Police Gary Griffith also last week asked the public to respect the law, plan properly for events including establishing safety protocols and to be vigilant when out. He also asked citizens to “be calm” and polite to one another and to work with the TTPS to make Carnival 2020 the safest so far.

Griffith, addressing a media conference at the National Carnival Commission (NCC) at the QPS, warned that the TTPS “will be out in full force” and said the country need not be fearful but should instead be careful.

Those with respiratory problems are advised to extra precaution this Carnival, as a surge of Saharan dust is expected over the next two days.

Wear a face mask where necessary and those suffering with asthma should, at all times, carry an emergency inhaler.

The Trinidad and Tobago Meteorological Service yesterday issued a two-day weather outlook that forecasts early morning showers that will gradually dissipate to give a mostly sunny, hazy and at times breezy day. Night time would be mostly clear”.

Those looking to escape the revelry of the next two days by taking to the nation’s beaches are asked to observe all necessary precautions and to keep abreast of forecasts for the weather and for marine conditions.

Criminals have taken advantage of the shutdown in the country to go on a crime spree, burglarising and looting several businesses in the capital city.

Non-essential businesses in Tri­nidad and Tobago have been shut down until April 30, in an effort to contain the deadly COVID-19 virus.

Government has engaged four private security firms to conduct these mobile patrols in communities from April 6 to May 5, “in the first instance”.

When it comes to staying home, Trinidad and Tobago has been the least compliant over its regional counterparts. That’s the finding of Market Facts and Opinions (MFO), on analysing Google’s COVID-19 Community Mobility Report dated April 4.

‘Fishermen’ to be charged for breaching borders

Several persons posing as fishermen have been ­arrested and will be charged for breaching the country’s borders, National Security Minister Stuart Young has disclosed.