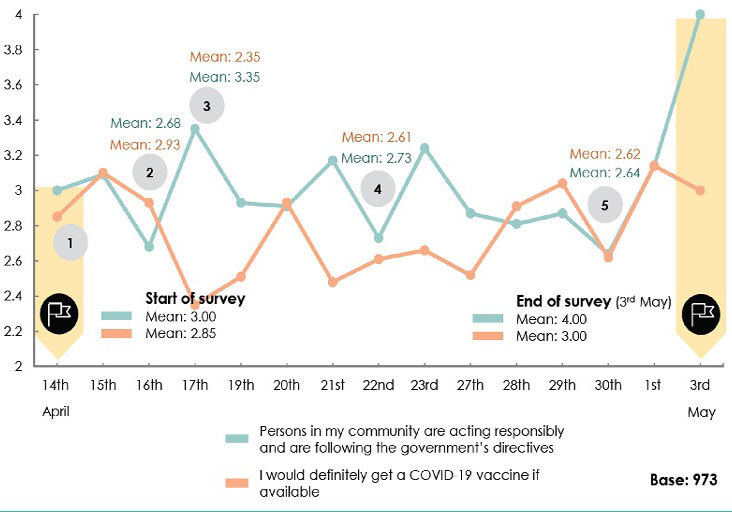 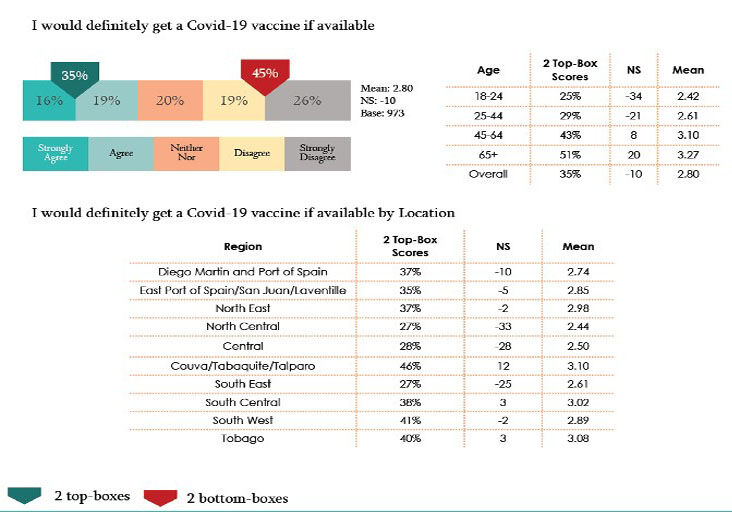 According to the study, media announcements of two deaths shortly after being inoculated—­including that of Minister Franklin Khan—created the sharpest dip in feelings of doubt about being ­vaccinated.

“The cohort in favour of taking the vaccine appears fragile and showed little growth over the period. At the end of the survey period, there was the announcement of further restrictions, this caused spikes in reported responsible behaviour, possibly reflecting public fear. However, there was no correlation between this fear and the desire to get vaccinated,” the study states.

The MFO data shows the country is divided on vaccines. “There is no majority opinion. A plurality of persons (45 per cent) disagree that they will take a Covid-19 vaccine should it become available.

Persons in the 65-and-older age cohort (possibly high co-morbidity groups) are more likely than any other age group to express interest in getting the vaccine. Young persons are the most hesitant about taking the vaccine, indicative of social media (home of misinformation) influence and individualistic ways (lack of social norms),” it stated.

Half of respondents hold the view that the Government is doing its best to secure vaccines for the country, the study found.

“Advocates strongly believe in these efforts by the Government. Three in four Reluctants, despite their unwillingness to take the vaccine, acknowledge the efforts that the government has made to secure vaccines.

“The Uncertains, those who are on the fence about taking the vaccine, disagree that the Government is making its best efforts. A low net score of -77 is attained for this group, as a result.”

The study put the percentage of vaccine Advocates at 24 per cent of the population, the Uncertains at 37 per cent and the Reluctants at 40 per cent.

Meanwhile, the study notes that mask wearing has become a common practice and will likely continue even after persons get vaccinated.

A majority of persons (nine in ten) who have either “­strongly agreed” or “agreed” that they will definitely get vaccinated (Vaccine Optimists), will continue wearing their mask, the study stated, adding: “This sentiment is no different across the ethnic groups.”

Nine hundred and seventy-three interviews were conducted between April 14 and May 3 via telephone (521) and online (452).

Telephone interviews formed a random national representative sample, ie, the sample matches the distribution of the population re: key demographic variables such as ethnicity, location, age and gender.

Online interviews were drawn from MFO’s proprietary panels and a pool from Facebook audiences. The full sample was re-weighted to ensure the representativeness of the entire population.

The sample sizes yielded a margin of error of 3.06 per cent at a 95 per cent confidence level.