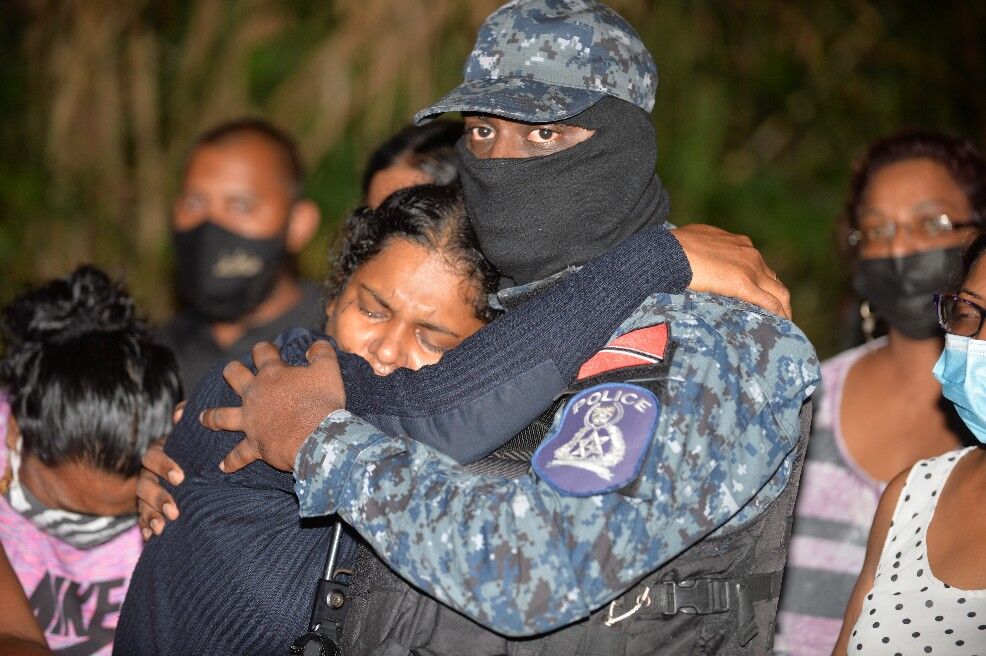 GRIEVING MOTHER: Rosemarie Jagroop is consoled by a police officer at the crime scene at Gangaram Road, off Brothers Road, New Grant, where her daughter Crystal and son-in-law Michael Deonarine were found dead in a house on Tuesday night. —Photos: DEXTER PHILIP 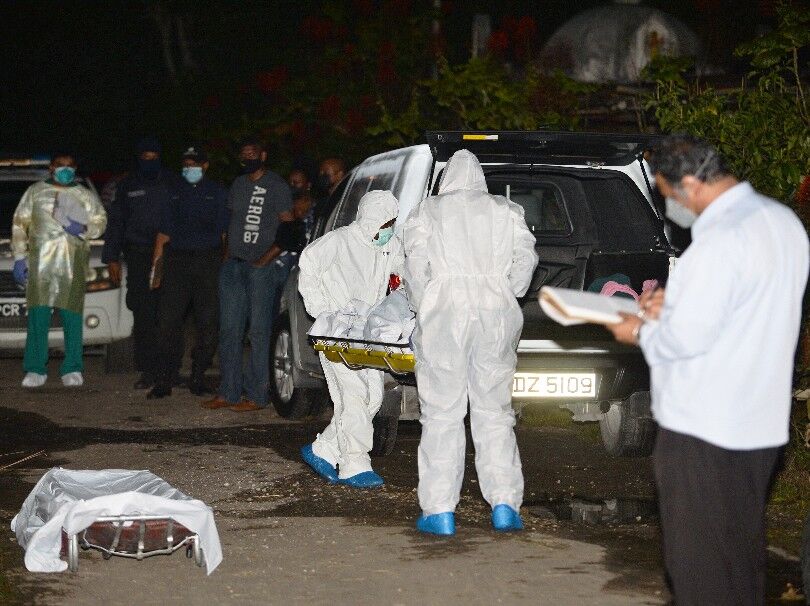 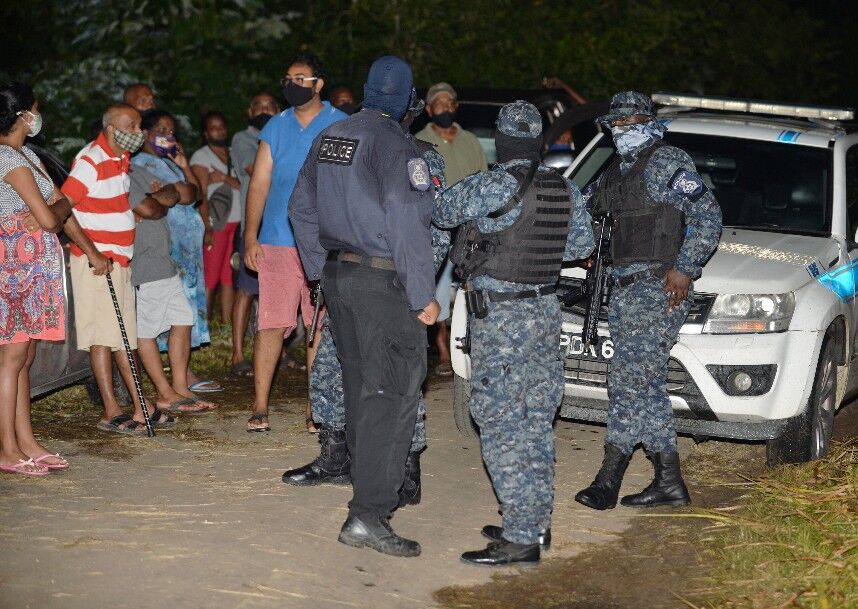 POLICE ON THE SCENE: Police officers on Tuesday night at the crime scene at Gangaram Road, off Brothers Road, New Grant, where they found the bodies of Crystal Jagroop and Michael Deonarine. —Photos: DEXTER PHILIP

GRIEVING MOTHER: Rosemarie Jagroop is consoled by a police officer at the crime scene at Gangaram Road, off Brothers Road, New Grant, where her daughter Crystal and son-in-law Michael Deonarine were found dead in a house on Tuesday night. —Photos: DEXTER PHILIP

POLICE ON THE SCENE: Police officers on Tuesday night at the crime scene at Gangaram Road, off Brothers Road, New Grant, where they found the bodies of Crystal Jagroop and Michael Deonarine. —Photos: DEXTER PHILIP

The decomposing bodies of Crystal and her 25-year-old boyfriend Michael Deonarine were discovered inside their New Grant home swarmed by flies.

A passing neighbour was the first to notice the stench coming from the structure and contacted a close relative. The relative (who asked not to be named) said he rushed to the scene and quickly contacted the police. When police arrived that afternoon, he said they broke down the wooden doors and found the lifeless couple inside.

“We stood by the road and we saw flies flying into the house through a window. When I got the stench, I called the police one time. When the police came, we broke open the door. She was on the ground, wearing a jersey. He was nude. I couldn’t take what I saw and I just walked back out,” said the relative in a telephone interview with the Express on Tuesday afternoon.

Originally from Rio Claro, Crystal had moved into Michael’s Gangaram home less than a year ago with the hope of building a better life and family.

As a separated single mother raising her six-year-old daughter, she dreamt of a life of stability with Deonarine, who shared her yearning. He, too, dreamt of a family and a boy child to whom he could offer love and guidance.

When the two met, family members say they fell deeply in love. And in the months they had lived as a couple, this love endured.

Deonarine built the wooden structure to house his new family on the grounds of a friend’s private land. Here, Jagroop would spend most days looking after her daughter while Deonarine worked odd jobs in construction or at a nearby sawmill. Though they were not wealthy, relatives said they were happy making do with what they had.

“He wanted a big family, he was independent and hard-working and she and him together they loved each other. Growing up, his father and him were not close because me and the father were not together. So, he would always tell us that he wanted a boy child and he wanted a big family. He treated Crystal’s daughter like gold. That is how much he valued family,” Deonarine’s mother, Shamilla Deonarine, said in an interview with the Express yesterday.

According to relatives, the couple were last seen on Sunday afternoon drinking on the roadside with friends. Deonarine’s stepsister, Shalini Ramsaroop, told the Express yesterday that her brother was known to be weak after drinking and had likely retreated to his home that afternoon.

Brother-in-law Devanand Parrylal added that neighbours later stated that gunshots were heard in the area around 1 a.m. on Tuesday. Family members, he said, believe that both Deonarine and Jagroop were shot and killed at this time. Their sudden deaths, he added, came as a complete shock to an otherwise quiet community.

“They said he was on the bed and she was on the ground. This is the first time something like this ever happened inside here. It is a complete shock to all of us. My mom is taking heart tablets and she is not coping well. When she found out she was weeping and crying. She is looking at pictures of him and just weeping.

“He was a good person, he used to sing in the temple, he was friendly and caring with everyone. I don’t understand how this could happen; he wasn’t in any kind of bad situation with anyone,” said stepsister Ramsaroop.

Jagroop’s daughter was not present at the home that afternoon as she was staying at the Rio Claro home of her grandparents, Rosemarie Jagroop and Bale Mohammed.

Mohammed said that he last saw his daughter on Sunday after she promised to return on Monday to help him in his garden.

“Crystal was here on Sunday, she was staying here for a couple days. I left before she left, I did some farming. Crystal was always someone who liked to be with me when I was planting, she would come up when she could and she helped me set up the planting. She said she would come back up on Monday and help me. She was asking her daughter to come with her but the child said she wanted to stay with Papa,” he said. He said following news of the death, he and grandmother Rosemarie Jagroop felt it necessary to tell their granddaughter what had happened. Though the child was initially traumatised, he said he had helped her work through the pain.

“For me as a grandfather I thought it was important not to withhold anything from her. She is very much oriented in the Christian faith and I learned to let her understand who God is to us. When I sat her down and told her about her mom and her death, she shed some tears and I was also there crying. Then she said to me, Papa I will stay with you and everything will be okay and alright. She was stronger than me at that point,” he said.

His daughter, he said, was a well-liked person who had plans to pursue a career in law-enforcement. He said the family could not reconcile with her violent end.

He described her relationship with Deonarine as a loving and efficient one.

“She told me about Michael as someone who treats her well. She said he may not have much in life but he is working hard and we want to build a better place and get things going in their lives. They were young, he treated her well. I can’t say there was anything wrong, up to now we are very confused about the situation...At this point in time we are not sure what happened. All we know is they are not here anymore,” he said.

Both families agreed they were waiting on the investigation of police officers to determine how the couple died. Police confirmed on Tuesday that spent shells were found at the scene. However, no weapon was located. Autopsies for both Jagroop and Deonarine are scheduled to be done at the Forensic Science Centre tomorrow.