Police officers at the scene of the triple killing. Photo: DEXTER PHILIP 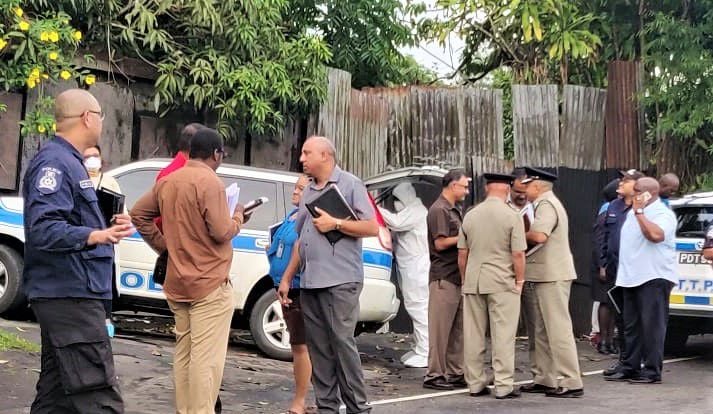 Behind this galvanised roofing sheet gate is the house. Photo: DEXTER PHILIP

The horror house is located behind these trees. Photo: DEXTER PHILIP

Police are at the scene of a crime right out of a horror movie.

Three decomposing bodies were found at a residence at Clarke Road, Penal this afternoon.

And it appears to be the bodies of three adults who lived there, a man, his wife, and his brother.

It appears they were dead for days.

They appeared clean and well fed, and police say that a relative, who is now the prime suspect, may have cared for them.

Crime scene officers are searching for evidence before removing the bodies.

The children have been taken to hospital.

The house is hidden behind large trees and a galvanised roofing sheet fence. There are no homes nearby.

According to Senior Superintendent Wayne Mohammed, the bodies were found at around 3.30p.m. by the couple's son Vishad Mohammed, 21, who lives elsewhere.

He came to the home of his parents because he could not reach them by phone since Sunday.

He found the bodies in the house and the children inside.

The police officer said of the children: "from all appearances, they were well kept".

He said the victims appeared to have been shot dead, but the motive was unknown.

Relatives were told that the three may have been murdered on Sunday.

Wendy Seepersad, Sherry Ann Mohammed's cousin, said the family never complained of being threatened and relatives were clueless as to why they were murdered.

"This is really sad. I cannot say why this happened. My cousin was a very nice person. She never went anywhere. I didn't know her husband well," she said.

Persad said the children were taken to the Siparia Health Facility.