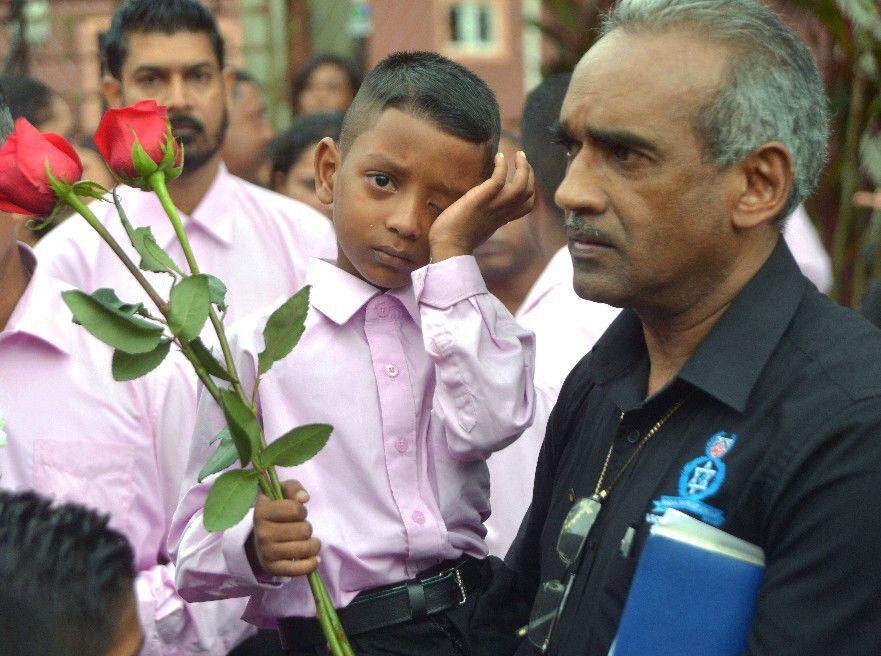 A CHILD’S GRIEF: An officer from the Trinidad and Tobago Police Service (TTPS) Victim and Witness Support Unit holds five-year-old Darrion Roopnarine, one of the sons of fatal accident victims Khemchand Roopnarine and his wife Patricia Harripersad, as he cries at his parents’ funeral at Aquart Village, Penal Rock Road, on November 5, 2017. Darrion’s parents died when they were hit by a car near the family’s home in Penal. 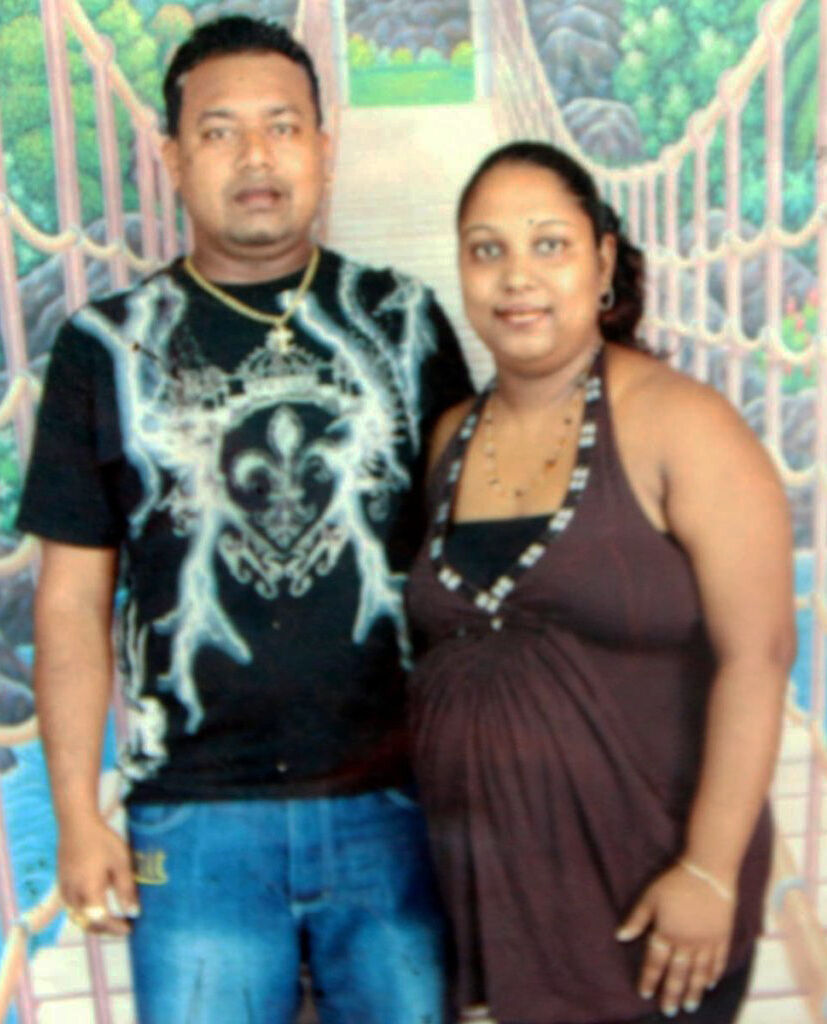 Khemchand Roopnarine, 38, construction worker, and Patricia Ali, 36, domestic worker, who were struck and killed on the night of November 5, 2017. 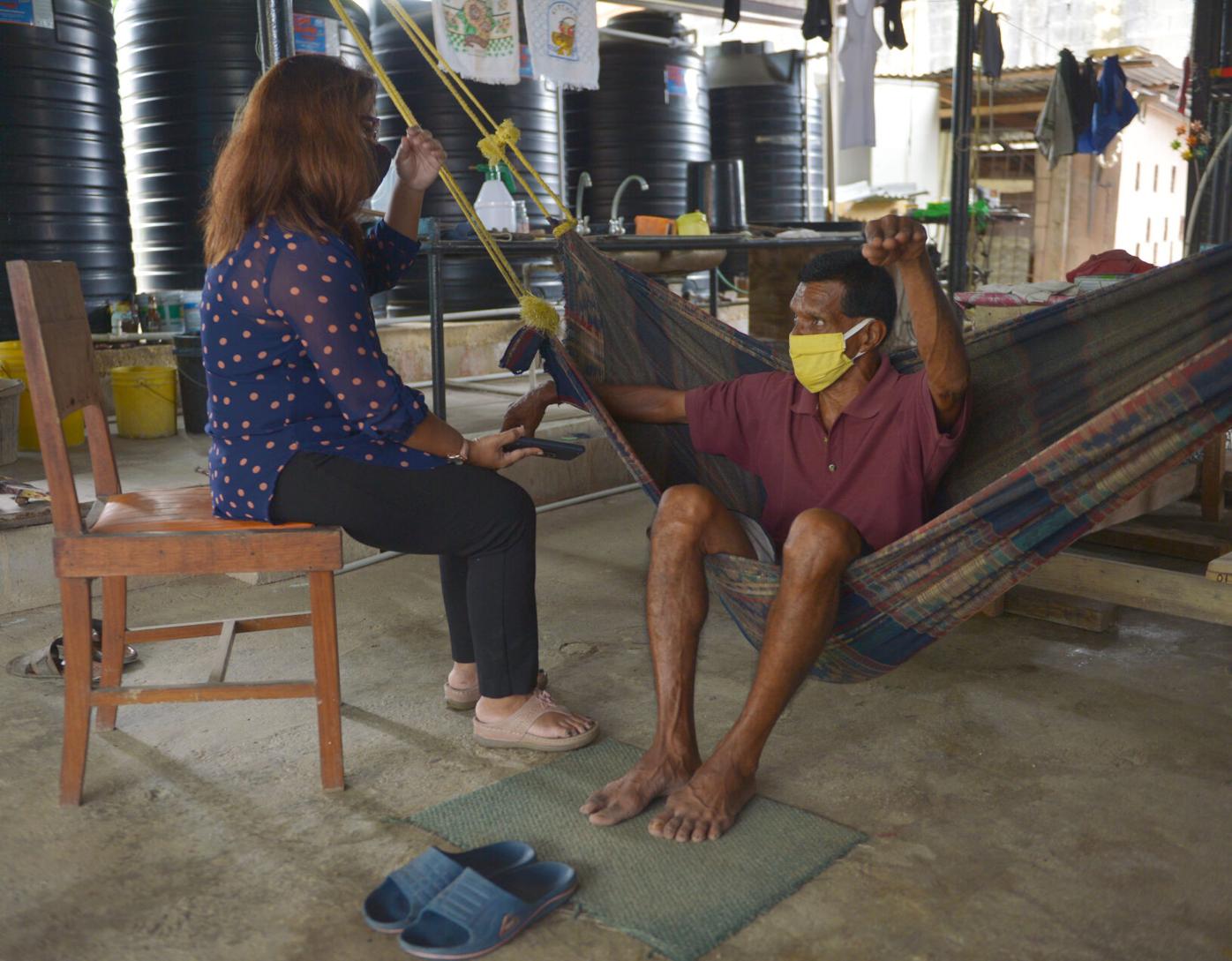 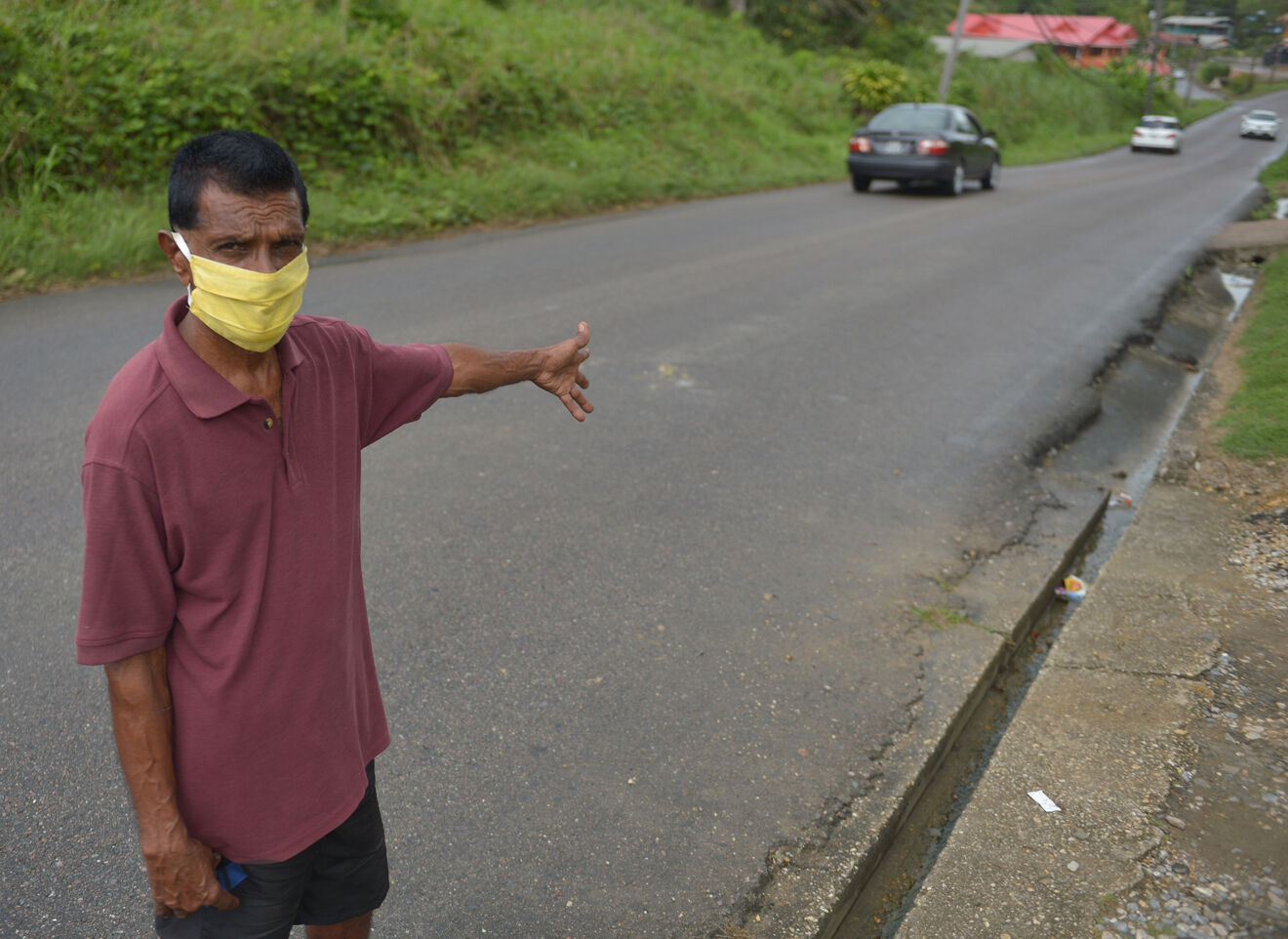 Seeram Roopnarine points to the area along Penal Rock Road where his relatives died during a fatal accident on November 5, 2017.

THE search for the hit-and-run driver of a vehicle that fatally struck Penal couple Khemchand Roopnarine, 38, and his love Patricia Harripersad, 36, might have ended nine days after their deaths.

A 35-year-old man, who went to the police and gave information on the double fatal collision on the night of November 5, 2017, was detained by police for at least three days, assisting in enquiries.

Then he was released without charge.

Investigators were initially told that there were only two people, the owner and her boyfriend-who was allegedly driving the car when it struck and killed the Penal couple.

But both have denied being in the driver's seat.

And police have statements from the autobody repairman who was asked to repair the vehicle at his home within an hour of the double tragedy.

Officers were called to the home of the repairman that night and later impounded the vehicle at the Penal Police Station for forensic examination.

But with the still evidence insufficient to lay a criminal charge, the police have told Khemchand's family-many of whom reside in the community where the double tragedy occurred-that a coroner's inquest is to be held into the deaths.

Khemchand's family longs for justice, not just for themselves but for his two sons left weeping and traumatised at the roadside over the deceased couple.

Khemchand, Patricia, Brandon, nine, and Darrion, six, were walking along the Penal Rock Road headed to their home after spending the evening with relatives nearby at School Trace.

Khemchand, a construction worker, spoke of his plans to purchase building materials the next day to complete a steel shed at the back of their house for a wedding to Patricia. On their walk home, the boys were footsteps ahead of Khemraj and Patricia-their backs to oncoming traffic.

Relatives who live near the point of collision heard two 'bangs'.

Khemchand was thrown into the grassy sidewalk, and Patricia was pitched into the air and fell on the offending motorist's vehicle before she too landed on the sidewalk.

Khemchand's relatives thought that in the coming days criminal charges would have been be laid against the driver and there would be swift justice.

On Wednesday, Khemchand's uncle, Seeram Roopnarine, took the Express to the area at 1¼ mile mark at Arquhart Village, Penal Rock Road, where the fatal collision occurred.

Penal Rock Road is one of the main thoroughfares that feeds the branch roads that serve 12,000plus residents, and the travelling public through Penal to Barrackpore.

For the near six-kilometre roadway, there are numerous bends and bumps to negotiate.

But the area where Khemchand and Patricia were killed is a straight strip.

There is a street lamp located opposite where the couple made their last trek.

'People who were there within a minute or two of the collision said they both died on the spot. I went there and saw them on the ground unresponsive. They had no movement at all,'

said Seeram Roopnarine. 'The children were crying and in shock. In front of their eyes, the parents died. Patricia originally lived at Clear Water in Rio Claro. But she left there to live with him in this village.

They were together for about eight years. He was completing repairs on the house and then would get married. I spoke to both of them that evening they got killed. He told me he was going the next day-Monday morningto buy material to cast a steel shed he was building at the back of his house.

All of that was in preparation to get married, to cook and have their guests. I spoke to him about that not knowing that would be the last time,' said the uncle.

Then weeks later, the family tragedy deepened as Khemchand's two sons, once inseparable, were taken in by different homes.

Brandon went to live with his mother, and Darrion-left orphaned- was taken in by Seeram Roopnarine's son, Mohinder, and his wife.

They live in neighbouring villages at Fyzabad and attend separate schools.

Of Darrion, Mohinder said he has sought full legal custody, which is contested by a member of Patricia's family, and there is a court hearing next month.

The child has not forgotten his parents and occasionally would reminisce on tiny details he recalled.

'Sometimes he would hear a song and say, 'That was my dad's favourite', or if he is eating or drinking something, he would remember them. He does ask questions about what happened. The social workers had gone into his school and counselled him. He does well in school,' said Mohinder. 'He asks for his brother often.'

Mohinder told the Express the family continues to wait in grief for the coroner's inquest to be listed and begin at the court.

'My father sought answers from the DPP's (Director of Public Prosecutions) office in Port of Spain about three times. I texted Gary Griffith about three years ago, and it was a general response like 'they looking into it'. Whereas the person who caused all of this is normal, walking free. There is no justice for this family', he said.

Seeram Roopnarine said three weeks ago he received a phone call from the DPP's office and was told that no date has been set for the coroner's inquest.

According to the Motor Vehicle and Road Traffic Act of Trinidad and Tobago, the driver of a vehicle upon a collision must stop the vehicle, give aid and make a report of the road accident.

Section 79 of the Motor Vehicle and Road Traffic Act states:

(1) Where, owing to the presence of a vehicle on a road, an accident occurs whereby injury or damage is caused to any person, animal or property the driver of any such vehicle shall immediately stop and (a) if any person has been injured in the accident, the driver shall render such person aid and if the person wishes to be taken to hospital or a doctor, or unconscious, convey or cause to be conveyed the injured persons without delay to the nearest hospital or a doctor;

(2) Any person who contravenes this section is guilty of an offence.

In making Stuart Young the new Minister of Energy and Energy Industries, the Prime Minister chose someone who had been involved in and familiar with all the major issues to be resolved in the energy sector.

THE Brazilian Covid Variant of Concern (P1) has been recorded in the local population.

The Ministry of Health yesterday confirmed that the P1 variant was detected in a local Covid-19 patient who tested positive for the virus in Nariva/Mayaro.

SIXTEEN years after his body was found in a cane field not far from his Couva home, the trial into the death of six-year-old Sean Luke began yesterday.

Following months of preparation by the court addressing preliminary issues, the State’s first four witnesses were called upon at a virtual judge-alone trial to provide their evidence-in-chief.

UNC MPs: Go for it

A number of Opposition parliamentarians have gotten the AstraZeneca Covid-19 vaccine.

However, some said that pockets of constituents are suffering from vaccine jitters following the deaths of 60-year-old Ijaz Haniff and Energy Minister Franklin Khan who died days after receiving the vaccine. Health authorities have maintained there is no evidence to suggest their deaths are related to the vaccine.