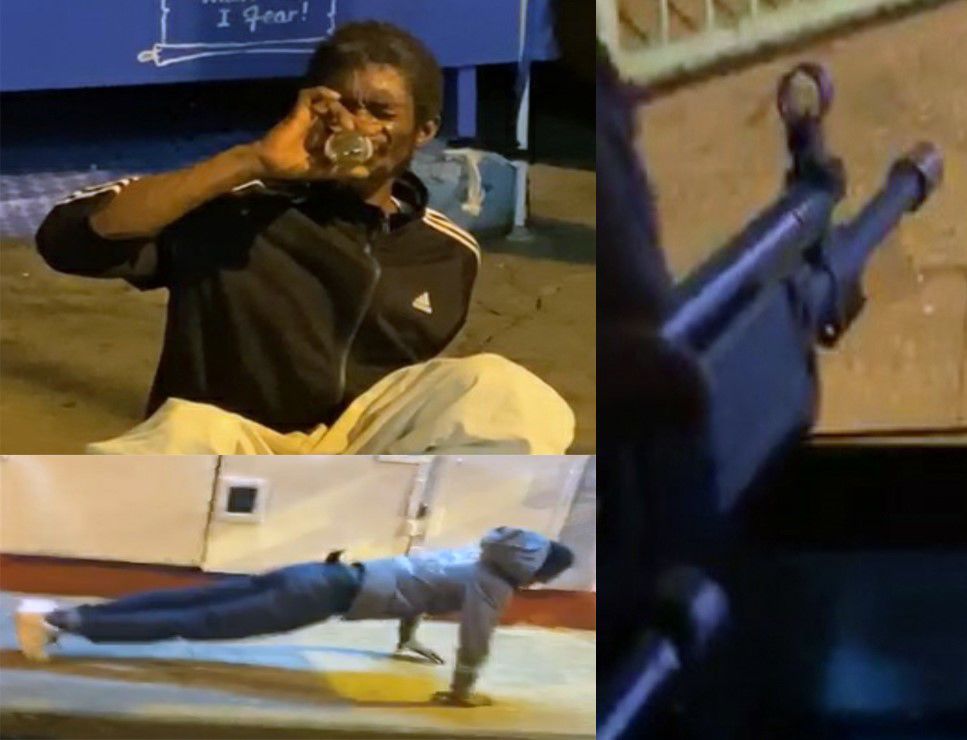 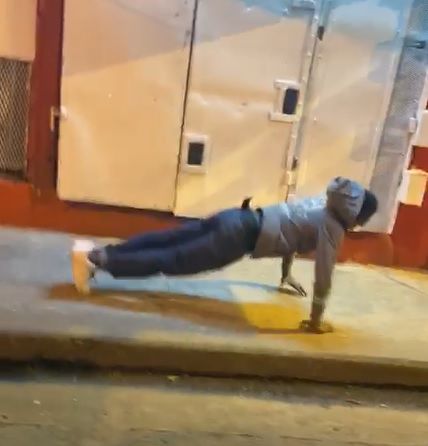 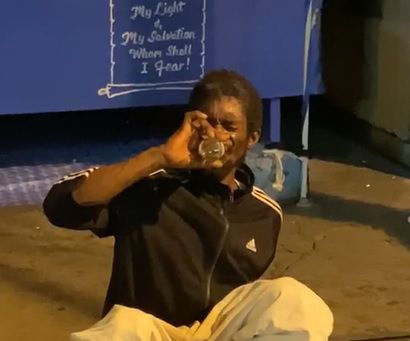 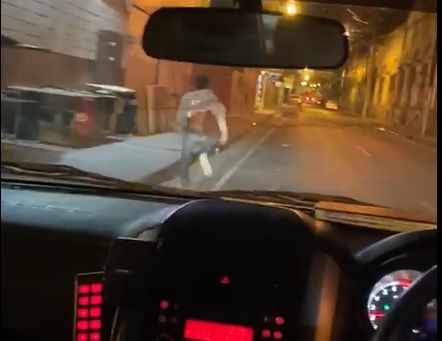 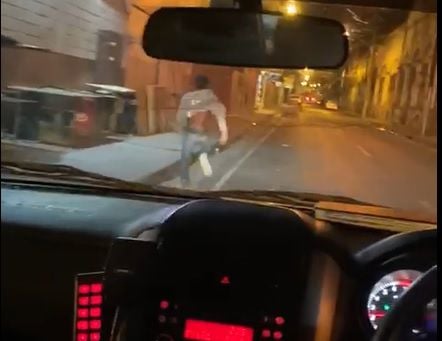 A screenshot of the video showing the chase.

Several deeply disturbing videos have emerged on social media showing what appears to be law enforcement officers patrolling the streets of Port of Spain in the dark hours this morning, and forcing two men to drink alcohol and do sprints and push-ups to avoid being arrested and charged with an undisclosed offence.

The giggling officers are heard telling one man, who appears to be homeless, to drink from the bottle in “one shot, go on, or else you getting a case eh”.

Another man who is forced to drink the entire contents of a bottle in two gulps, is told “run with the van” and when he does not immediately begin, he is told by an officer “come on Usain, you have two seconds. I feel right I go shoot you”.

The officer then takes the safety off his rifle and points it through the rear window of the vehicle in the direction of the man, who is told, “let’s go, come on, and don’t let the van leave you…and I want you to say left, right, left”.

The man is then seen sprinting along the sidewalk, chased by the officers in their vehicle, and told to do push-ups. When the laughing officers are satisfied, the man is told to go on his way, since he “get a bligh”.

Another pedestrian is handed a bottle and told to “swallow, drink all in one shot, or else you going down the road”.

The man is also asked to “raise your head” so he can drink the contents of the bottle easier.

The Express shared the videos with Commissioner Griffith and has asked for a response.

He said: “Anyone who can assist in providing the vehicle number and approximate time of incidents, please forward to 482 4279 (GARY). I want to deal with these officers as quickly as possible. We are trying to confirm the time and date. We have the location".

He added: "As mentioned, which seem to upset some, the ttps must not and would not abuse their authority during this period, which includes excessive use of force. Hence the reason why I stated the truth, which was that the police cannot arrest anyone if they venture outdoors. But we would persuade all to use the law of common sense and remain indoors unless absolutely necessary to do otherwise".

He said the videos showed an abuse of power “and I intend to deal with it. We do not want such individuals wearing a uniform.”

Young said he has communicated with the Commissioner of Police and the Chief of Defence Staff with respect to these videos and it was agreed that immediate investigations will be carried out.

"The behaviour depicted in the videos is condemned in the strongest manner. The TTPS and TTDF will act in a responsible manner and carry out their important roles and duties in this time of stay at home' he said.

The issue of law enforcement overreach was raised within minutes of a press conference last Thursday when National Security Minister Stuart Young detailed the stay-at-home order that came into effect at midnight today.

He said then that the defence force would be supporting the police in enforcing the regulations that prevented gatherings of more than ten people, and for non-essential personnel to be outside of their homes except to leave for supplies.

Young advised citizens not to test the soldiers.

Police Commissioner Gary Griffith has however reminded citizens that the regulations gave the police service no additional powers of arrest, except to enforce the social gathering and non-essential worker ordinances.

Last Friday, Griffith issued a statement, saying: “The TTPS will be enforcing the law as written and will be acting within the confines of the Constitution of Trinidad and Tobago. As Commissioner of Police, I give the assurance to the public that our officers will be acting professionally and will be interacting with the public in a courteous manner. I need to point out however, that we are willing to do all that’s necessary to ensure the safety and security of the majority of citizens and as such will not tolerate persons flouting the regulations.

I remind citizens that we are not under a State of Emergency and as such the Trinidad and Tobago Police Service remains the only civil law enforcement authority in the country. While our brothers and sisters who are members of the Defence Force shall be assisting the Police Service, it is only the TTPS that possesses, at this time, the power to stop, question or arrest persons as prescribed by law.”

He said the police would be always, as its first course of action, attempt to use moral suasion and reason with members of the public to ensure compliance with both the spirit of the regulations and the regulation itself.

The Trinidad and Tobago Regiment is confirming that two of its soldiers, along with two police officers, have been charged in connection with …

Faced with persistent insin­uations from Opposition Mem­bers in Parliament yesterday that he got a Pfizer jab from the 80 vials sent from the US, Prime Minister Dr Keith Rowley went on the offensive and suggested that Opposition Leader Kamla Persad-Bissessar had contracted Covid-19 at some stage.

THE State’s flagship energy company, the National Gas Company (NGC), registered an after-tax loss of $2.1 billion for its 2020 financial year, which ended on December 31, 2020.

The public is again being advised to be careful about using herbal remedies to treat Covid-19, as it can cause more harm than good in certain instances.

The Gambling (Gaming and Betting) Control Bill, 2021 was passed in the House of Representatives yesterday.