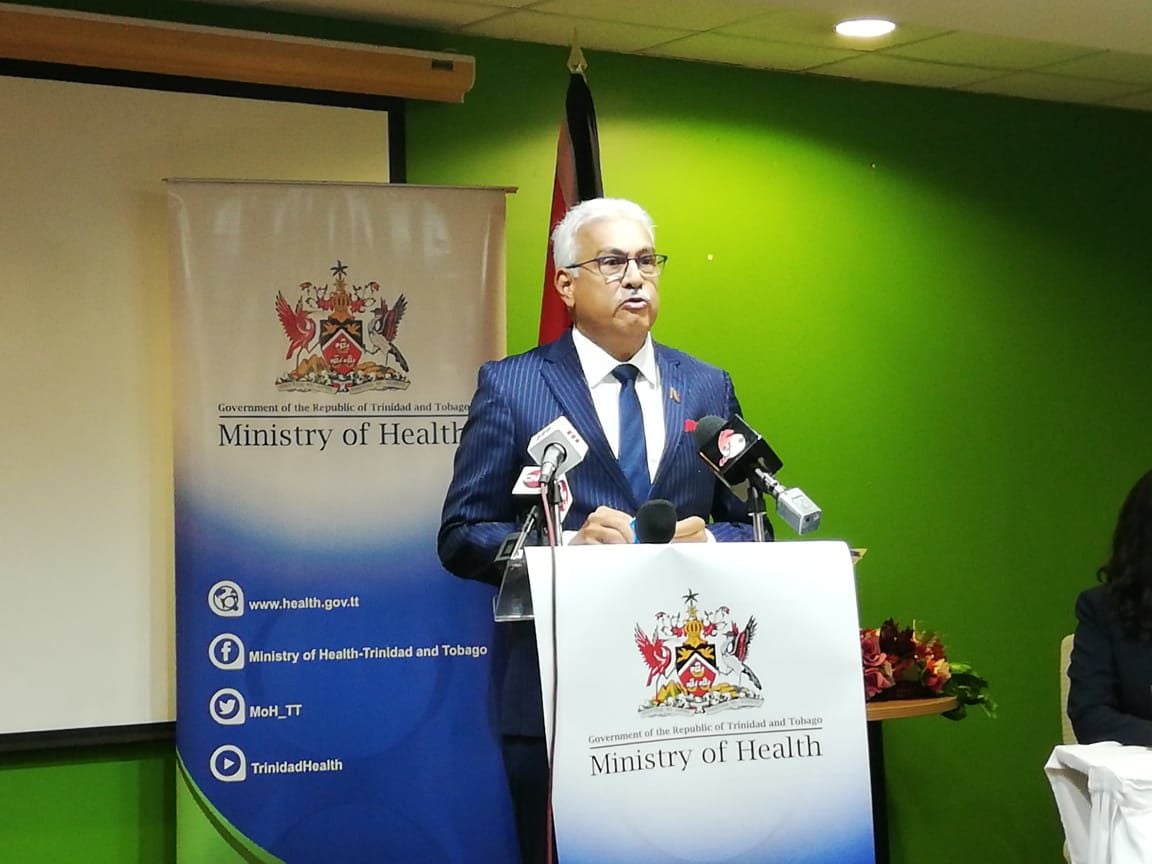 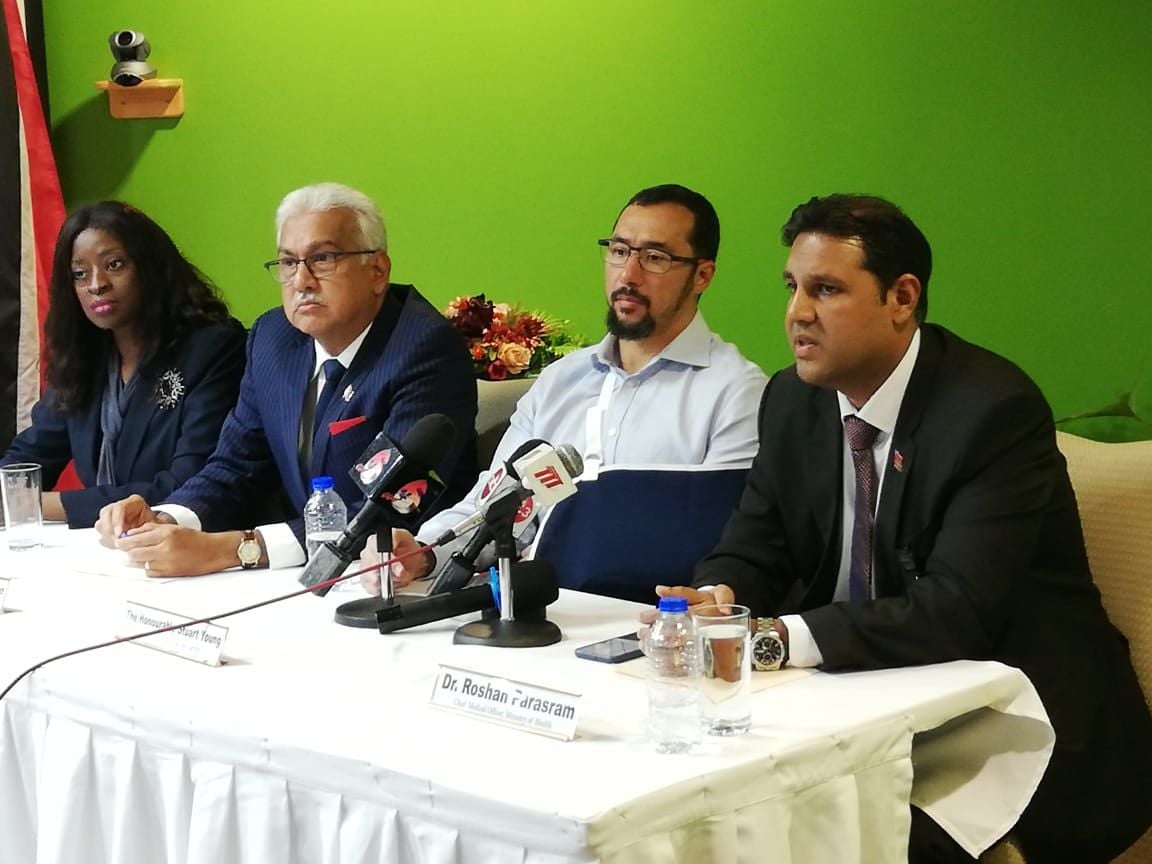 Health Minister Terrence Deyalsingh this afternoon disclosed that a patient had tested positive for the virus.

He flew into the country from Switzerland on Monday and self-isolated even before he began experiencing symptoms, said National Security Minister Stuart Young.

By Wednesday, the man began experiencing symptoms and his family contacted health authorities.

A test was done and at 2.45pm and it was confirmed.

Contact tracing, which involves locating all the people the patient was in contact with, is underway, and national security is supporting the effort.

All the passengers on the patient’s flight are being contacted.

The contact tracing in being done using the protocols for tuberculosis, by Dr Michelle Trotman from the Caura Hospital.

Arrangements are being made to transfer him from his home by suitable ambulance services with all personal protective equipment, to the Caura facility.

His family members are also quarantined at home.

The patient’s identity is being kept confidential.

The man was described as having a "mild case" of the coronavirus.

Switzerland has over 800 confirmed coronavirus cases and six deaths.

The arrival of the virus had been anticipated for weeks, with the Health Ministry preparing a containment plan with the hope of delaying the spread, and preventing the upheaval that happened in others countries.

However, Wednesday’s declaration of the viral illness by the World Health Organisation (WHO) as a pandemic set off a wave of fear across Trinidad and Tobago, with people panic buying supplies similar to the preparation for a coming hurricane.

Up to up 1.30p.m, Deyalsingh was telling the Express that reported of a confirmed case was untrue and that people had to stop spreading fake news, which was spread fear faster than the virus itself.

This week, Jamaica, St Vincent and Guyana announced confirmed cases with the Guyana patient, a woman who travelled from the United States, dying at hospital.

Prior to the announcement today, Deyalsingh said Cabinet had taken the decision to ban all cruise ships from visiting Trinidad and Tobago for the rest of the cruise ship season, in an effort to protect T&T from imported cases of the coronavirus (COVID-19).

‘Virus here by next month’

What happens to a COVID-19 patient in Tobago?

If a person tests positive for COVID-19 in Tobago he/she will not be treated in Tobago, but will be brought to Trinidad via a Coast Guard vess…

As of Thursday morning, the Ministry of Health reports the following:

The Point Fortin Borough celebration may be in jeopardy.

A 52-year-old man who arrived in Trinidad and Tobago from Switzerland on Monday night is T&T’s first confirmed case of the COVID-19 coronavirus.

Driven by fear for their families, people yesterday crammed supermarkets across the country to buy food and cleaning supplies amid news that Trinidad and Tobago recorded its first coronavirus case.

After shopping, I was the last passenger to climb into a Port of Spain taxi when I heard the intermittent sniffles of a passenger seated next to me in the middle of the vehicle which was filled to capacity. I adjusted my claustrophobic seating arrangement so my face at all times was almost outside the window. Although the sniffling passenger was a short drop this passenger didn’t get away unscathed.

As Trinidad and Tobago confirmed its first case of the COVID-19 coronavirus, live events across the country are being cancelled or postponed.

Jazz Artists on the Greens postponed due to COVID-19 concerns

13 March 2020 – Glencoe: In light of yesterday’s post-Cabinet news briefing and the press conference hosted by the Ministry of Health, where t…

The Ministry of Health, Trinidad and Tobago, advises of the country’s second confirmed case of Coronavirus Disease 2019 (COVID-19).

CMO: Ministry erred by diclosing too much info on first case

Chief Medical Officer (CMO) Dr Roshan Parasram said yesterday the Health Ministry made a mistake by disclosing too much information about the first COVID-19 case in Trinidad and Tobago.

VOTING IN A TIME OF COVID

A total of 1,134,136 electors are eligible to vote in today’s general election at 2,210 polling stations in 41 constituencies.

How they exercise their franchise will decide who will receive the mandate to govern Trinidad and Tobago for the next five years.

A traveller from Trinidad, whose Covid-19 test results were pending, has become Tobago’s sixth positive case.

This as T&T recorded four new positive cases yesterday, bringing the total for the country to 279.

This brought the country’s active Covid-19 cases to 136, with 89 patients currently at hospital and up to yesterday afternoon, and 27 new patients en route or being admitted to hospital.

GOD, his wife Dr Sharon Rowley and those who prayed for him were given thanks yesterday as a reflective Prime Minister Dr Keith Rowley addressed a Sunday morning church service in his constituency and admitted that in the past few months of his tenure, there were “very many days and weeks of stress”.

Persad-Bissessar made the call as she spoke to the media before a motorcade through her constituency of Siparia. When asked about the stabbing of former UNC councillor Phillip Gonzales on Saturday, she said she wished him a speedy recovery.

As the Covid-19 pandemic rages, throngs of people have flocked to the Roman Catholic Church for food hampers and assistance, including prayer and counselling.

A cache of guns, ammunition and drugs were found and seized by officers of the Special Opera…