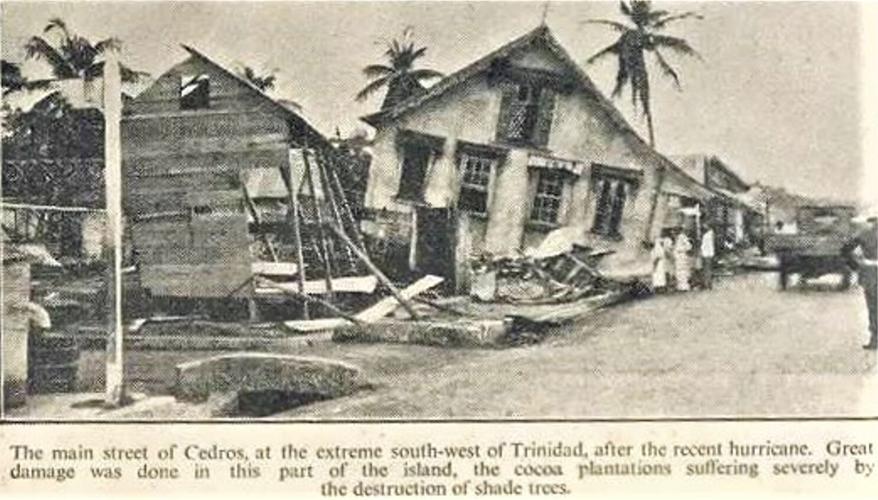 Aftermath: The main street of Cedros, at the extreme south-west of Trinidad, after the hurricane. Great damage was done in this part of the island, the cocoa plantations suffering severely by the destruction of shade trees. 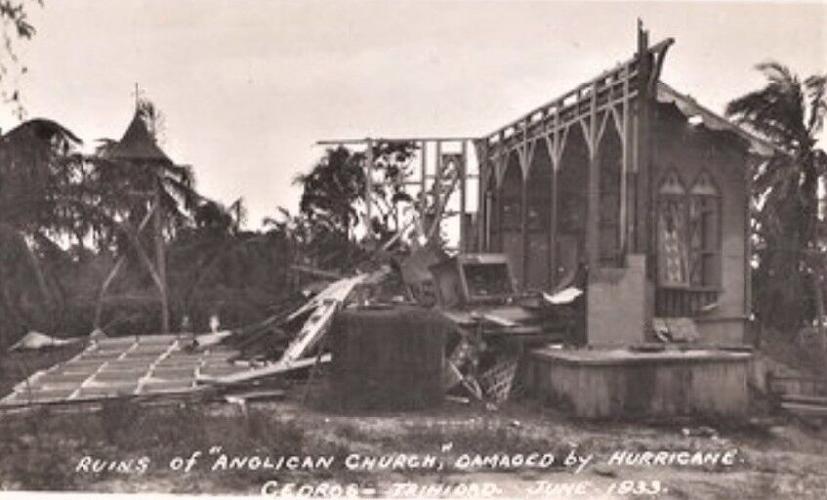 What was left: Ruins of the Anglican church, damaged by the hurricane. Cedros, Trinidad, June 1933. 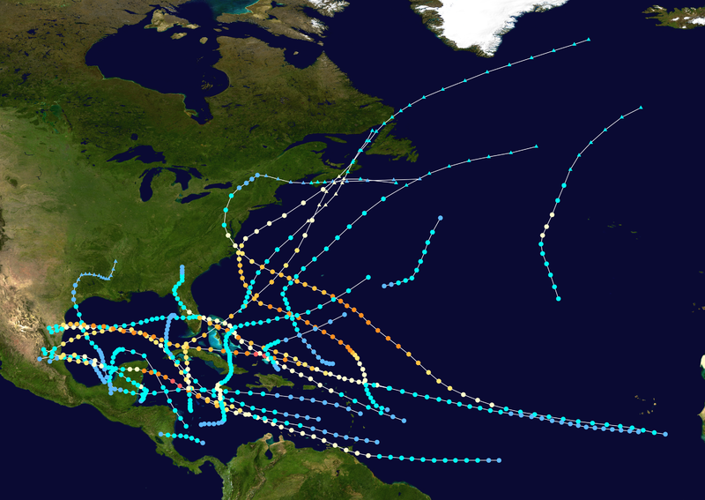 It was also a Tuesday night, and late in June, 89 years ago, when one of the most southerly hurricanes to develop in the Atlantic Ocean spun shore on Trinidad’s far south east coastline.

The cyclone of 1933, a time when hurricanes were not yet given names, left a path of devastation from which one industry never fully recovered, and an experience still remembered by the elders of the area.

The hurricane tracked further south than any other storm in recorded history, impacting an island with no memory of it happening before (the previous one was in 1892), and largely unprepared to respond.

Much of the damage was done out of sight and concern of urbanites in Port of Spain and San Fernando.

But when the catastrophic events from “deep south” finally emerged, it became international news.

“Thousands Homeless, Eleven Deaths” screamed the headline of The Advocate newspaper in, of all places, North-western Tasmania.

The paper wrote: “Additional reports which are coming to hand as communications are brought nearer to normal reveal that tremendous havoc was caused in the Paloseco (sic) oil-fields as a result of the hurricane and rain storm that swept the territory on Tuesday and early on Wednesday.

At least eleven deaths have occurred and thousands homeless in scores of villages. Three hundred houses were destroyed in Erin alone.

A message from Paloseco stated that 60 derricks belonging to the Trinidad Petroleum Company had fallen and had been destroyed. Oil was flowing over the countryside from 20 wells and storage tanks. The main delivery line, running eleven miles through the forest to the United British refinery had been broken by fallen trees, and the entire contents had been lost.”

The damage estimate was put at $3 million.

The June 30 edition of the Montreal Gazette in Canada, which had much interest in Trinidad due to its Presbyterian Mission connection, was more detailed in its coverage:

“Scenes of death and destruction were described today as repaired communication lines brought first reports from Southern Trinidad of havoc wrought by Tuesday night’s hurricane. The howling storm lashed the coast all Tuesday night and blew itself out on Wednesday, leaving behind it fallen and telephone poles, unroofed houses and broken oilfield derricks. Several drownings were reported as small boats foundered and a number of people were injured when trees were uprooted.

A refinery superintendent of the United British Oilfields was severely injured by a falling tree that struck his automobile while he was en route to the oilfield.

The entire residential district of the British controlled oilfield was ruined and scores of villagers were left homeless.

One man narrowly escaped death when a tree fell across his house, where he was asleep on the verandah. Cocoa plantations were heavily damaged, but it was impossible to get an estimate tonight.

While San Fernando escaped the hurricane, it experienced strong winds and heavy rain. Two lighters (boats) sank in the harbour and their crews, six men and one woman, clung to the wreckage until rescued several hours later.

Two Ships, the Madiana and the Influence, ran ashore at Point Fortin, where a new pier was being constructed, and two lighters were also damaged.

At the height of the gale a man working on a raft near the new pier was blown away from shore. His body was found three miles from the spot on the following day.

Ships at sea felt the hurricane’s strength. The liners Nerissa and Van Rensseiear put into Port of Spain harbour reporting an extremely rough passage. One of the Van Rensselear’s lifeboats was washed overboard by mountainous waves that swept her superstructure.

In Port of Spain there was little damage. But inland, roads were piled high with fallen trees and other debris. It was the first time in history that a gale and devastation such a large part of the colony”.

The American newspaper The Reading Eagle let Pennsylvanians know that the hurricane had killed at least 12, and that “A coastal steamer was sent with supplies and medical assistance to Cedros, one of the hardest hit sections”.

The historians record that the cocoa industry, one the island’s most lucrative crop, was already in decline, afflicted by the witchbroom disease, when the hurricane barrelled across the plantations in that part of the island.

The winds felling many of the shade trees that protected the cocoa, with an estimated 86,000 acres of forest damaged, particularly in Guapo.

The September 1933 issue of the Meteorological Magazine gave these details: “The hurricane winds began from north about 7 p.m. and maintained this direction until 8.30, gradually increasing in force. Most of the derricks were destroyed, the broken clocks registering about 8.10. From 8.30 to 9.30 the wind veered from north to due east; high woods and some derricks that had survived the northerly gale fell towards west. After 9.30 the wind shifted from east to southeast by south, blowing from the latter direction at 10.30 p.m. when the hurricane ended. The final stages were accompanied by very heavy rain with a few violent gusts. These observations clearly show that the storm centre passed to the south of the observer travelling in a direction a little south of west. Observations at Cedros, near the south-western point of Trinidad, show that the centre also passed to the south of that village, where many buildings were demolished including the school. Actually the centre is said to have passed over a tanker at the mouth of the San Juan river, on the coast of Venezuela to the west-south-west of Cedros. Thus it must have been very near the south coast of Trinidad. On the opposite coast of Venezuela the mangroves were damaged for only a few miles inland, and Mr Fahey estimates the diameter of the storm as only 35 miles. The storm travelled westward for about 100 miles, and then turned towards the north-west. On the morning of June 29th, the centre was about lat. 13°N., long. 70°W., and on the 30th it passed south of Jamaica.”

It is also recorded that the hurricane (which killed a total of 35 people) crossed over Cuba, reached peak winds of 110 miles per hour (Cat 2) and caused heavy damage when it made landfall in northwestern Mexico, with the rainfall spending itself on in south Texas, ending a prolonged drought.

Hurricane and tropical storms are considered a rare event for Trinidad. Previous to 1933, were cyclone visits in 1810, 1884 and 1892. It is recorded that the storm of February 23, 1884, blew down large trees near Port of Spain in the north of Trinidad. The hurricane of May 12, 1810, was more serious with houses blown down and shipping destroyed, but as in 1884 the damage was confined to the northern part of the island. The hurricane of June 27, 1933, is outstanding for the extreme southerly position of its track as well as for the violence and long life of so small a centre.

Pensioner gets bail for fraud

A pensioner has been granted $70,000 bail after he was charged with fraud last week.

Ethel Libert-Swann is 100 years old. The centenarian celebrated her birthday on Saturday sur…

TWO men were ordered by the court to stay away from the women they were charged with raping.