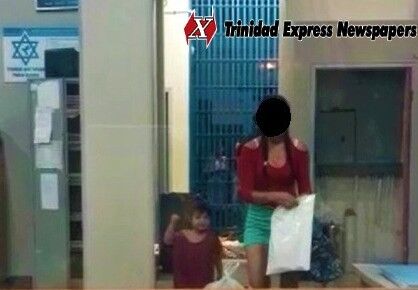 One of the Venezuelan children shortly after being taken out of a cell at the Erin Police Station. 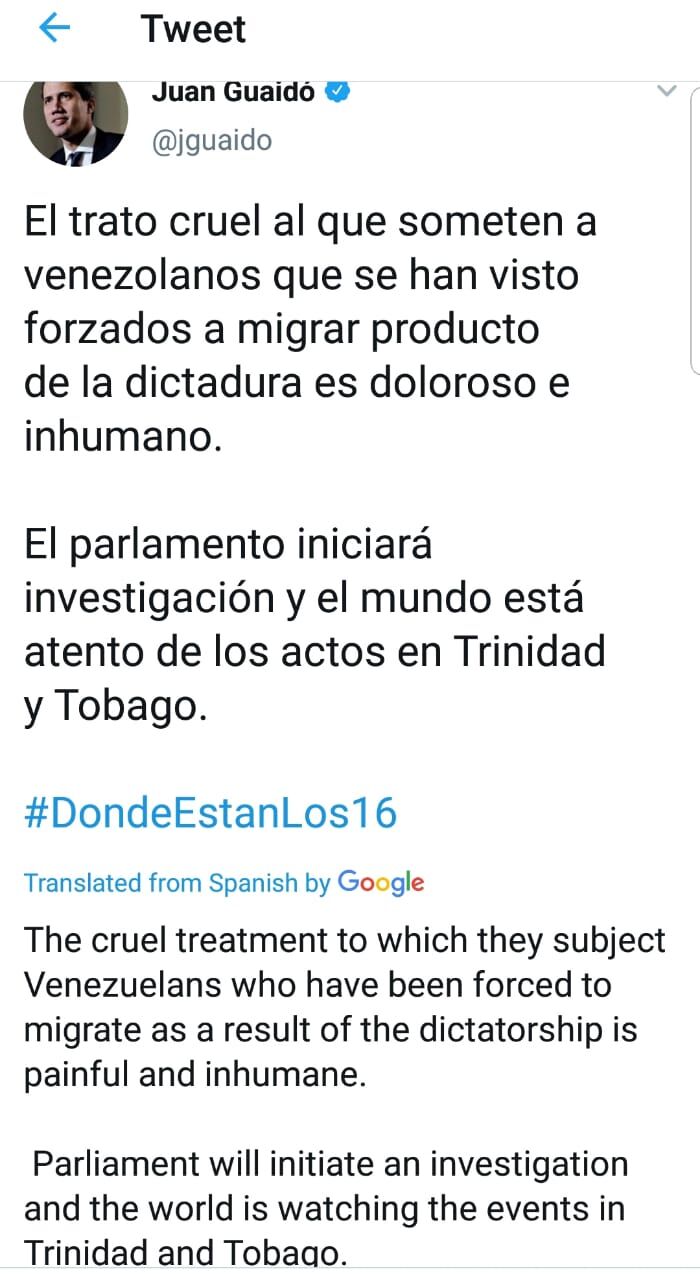 Self declared Venezuelan interim President Juan Guaidó has lambasted Trinidad and Tobago's deportation of 16 Venezuelan children describing it as "cruel, painful and inhumane".

The deportation has sparked outrage on social media with hundreds of persons condemning the move to deport the children majority of whom are under 10 years of age.

They were detained by police last Tuesday on November 17 and spent five nights in cells at the Erin police station before they were deported on Sunday morning on a pirogue.

Guaidó has started the hashtag #DondeEstanLos16 which translates into #WhereAreThe16 as the pirogue transporting the children back to Venezuela is yet to be located.

"The cruel treatment to which they subject Venezuelans who have been forced to migrate as a result of the dictatorship is painful and inhuman.

Parliament will initiate an investigation and the world is watching the events in Trinidad and Tobago. #Wherearethe16"

Guaidó had re-tweeted a post from the Inter American Commission on Human Rights (IACHR) which expressed concern about the deportation.

The IACHR noted that the whereabouts of the children after they were deported are unknown.

The IACHR urged Trinidad and Tobago to guarantee entry into the territory of Venezuelan people seeking international protection for urgent humanitarian reasons.

"Trinidad andTobago. The @CIDH/#IACHR expresses concern about the deportation, on Nov22, of Venezuelan migrants including 16 Children Adolescents, some of them unaccompanied. According to public information, these people are found at sea and their whereabouts are unknown.

In this regard, the IACHR reiterates its Resolutions 2/18, 4/19, and 1/20 and urges Trinidad andTobago to guarantee entry into the territory of Venezuelan people seeking international protection for urgent humanitarian reasons, as well as respecting the principle of no return.

Likewise, the IACHR urges Trinidad and Tobago to strictly observe the duty of special protection of Children Adolescents migrants and to consider their best interests in all decisions that affect them. Human Rights".

Guaidó, leader of the National Assembly who declared himself the interim president of Venezuela on January 23, 2019, claiming that the constitution justified his action because the allegedly fraudulent 2018 election of Nicolás Maduro had left the country without a president.

More than 50 countries recognise him as Venezuelan President including the United States and the United Kingdom.

Guaidó as well as the IACHR tweets sparked an outpouring of posts criticising Trinidad and Tobago.

One expressed concern about the children health and safety.

The following are some of the translated tweets:

#URGENT Fathers, mothers and representatives of the 16 children deported by the government of Trinidad. Several would be dehydrated and vomiting. It has been raining on the route and the whereabouts are unknown

Every Venezuelan must echo this.

It cannot remain like this no more, Trinidad and Tobago must answer for this fact, the international authorities have to investigate and punish in a forceful way the irresponsibility and lack of humanity towards these people, in addition, minors, what the hell have they believed

They have to explain why no child in the world deserves to be treated the way they are in Trinidad and Tobago. They flee from the dictatorship that steals their childhood and there they even steal their lives

These children were not deported, they were expelled from Trinidadian territory, a fact that becomes a crime against humanity. Put things in the real, unadulterated context of social media diplomacy.

We need them to demand the search for the 16 children and the 9 women on board the peñeros who were thrown into the sea without food, with little fuel and in the middle of a storm.

We need them to appear and those responsible to be punished.

This cannot go unpunished. They are children by God, what a misery of people. God does not exist in those hearts.

The international community must do something strong to stop so much xenophobia against the villains Trinidad and Tobago are criminals who violate all international human rights and refugee laws.Hundreds of cases of homicides, rapes, jails, deportations, nobody does anything.

Have the Venezuelan military vessels and planes left to blow up the area? Venezuelan children thrown in rocks into the sea, in bad weather by Trinidad and Tobago are not important? Where are the international human rights activists?

Trinidad and Tobago complied with its laws and political line; nothing can be done anymore; just wait for the 39 corpses to appear alive or; nothing and no one will be able to charge that country anything ... Thank you thank you Narco-dictator

The search continues this morning for missing hiker, Qadir Shah, who disappeared in the wate…

Ministry's 'Did You Know' campaign backfires

The global battle for vaccines may cause major delays for small nations like Trinidad and Tobago in getting their populations inoculated.

While Government officials are hesitant to admit it, this country’s first shipment under the COVAX arrangement could be in ­trouble, given the worldwide scenario.

“Nothing has changed. We are still waiting for justice.”

This in essence is how residents feel eight months after they were promised action when they protested the police killings of three men as well as other social and economic issues.

In June 2020 when protests erupted in Port of Spain and environs following the police killings of three men in Morvant, the Morvant community and the surrounding areas of Beetham Gardens, Sea Lots, John John and other areas in East Port of Spain found themselves under the national spotlight.

For days, protesters held the country’s attention as they called for justice for Joel Jacob, Noel Diamond and Israel Moses Clinton who were shot and killed by police on June 27.

Hinds: Work going on to bring about changes

He, however, noted there has indeed been peace in the communities since the protests.

“Change comes from thinking and planning and changes in behaviours and attitudes and approaches by all stakeholders—Government, NGOs, places of worship, families, communities, individuals, etc. So protests don’t change anything, it is work and action and shifts in attitudes and cultures,” he said in an interview with the Sunday Express yesterday.

Poverty and pain on the Promenade

The Sunday Express interviewed several women on the Brian Lara Promenade last week to get their views on IWD.