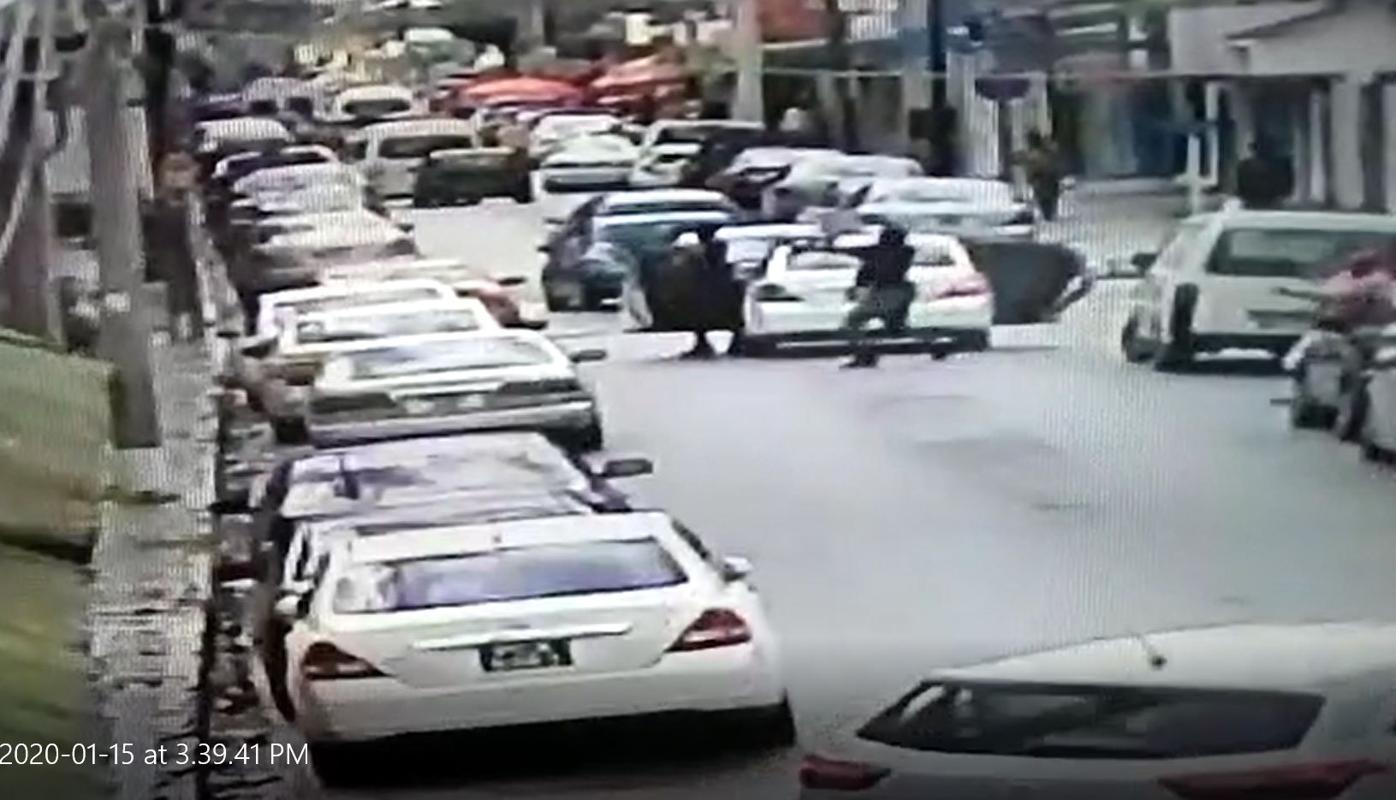 CCTV footage of the shooting

The scene of the shooting

Just two weeks after five people were wounded and one killed in Port of Spain, the capital city recorded another multiple shooting this afternoon.

This time, three people, including an 18-year-old woman, were shot.

Broomes and Donwa, died at the Port of Spain General Hospital.

Mona is listed in a serious condition.

A fourth man was injured as he ran from the gunfire.

The Express was told that the gunfire erupted at around 2:25p.m. along Queen Street, in the vicinity of Nelson Street.

A white Nissan Tiida pulled to a stop and two men armed with firearms exited the car.

The men walked to a northern area off the roadway where they opened fire on a group of people.

They then returned to the Tiida and drove away.

The police and emergency health services were immediately notified and the injured parties were rushed for medical treatment at the General Hospital.

An All-Points Bulletin was issued and a vehicle was spotted along the Eastern Main Road, Laventille.

Officers attempted to intercept the vehicle, but its occupants opened fire on them. Officers fired on the suspects but they ran into the hills of Laventille, one of then carrying an automatic rifle.

No police officer was injured during the exchange, but investigators believe that the gunmen were wounded. The vehicle was subsequently impounded.

An active search is underway for the gunmen.

Mom of 3 killed for nothing, in Port of Spain

THE FAMILY of Lystra Hernandez-Patterson lamented yes­terday that they were forced to be in close proxi­mity to the relatives of some of the men who killed her, and they felt unsafe just being around them.

POLICE shot four gunmen yesterday, killing two of them less than 15 minutes after the shooters had killed one woman and injured nine other people, including a five-year-old boy.

POLICE shot four gunmen this afternoon, killing two minutes after they killed a woman and sh…

PM: You can vote without a mask

The wearing of masks will not be a precondition for entering the polling station or the voting booth in the August 10 general election.

This was confirmed by Prime Minister Dr Keith Rowley yesterday during a news conference at the Diplomatic Centre in St Ann’s.

Faced with an alarming increase in ­Covid-­19 cases, the Government has reduced the numbers of persons allowed to congregate from 25 to ten.

And the Public Service is to ope­rate on 50-per cent rotation basis for the next 14 days.

Sexual slavery is rampant in Trinidad and Tobago, ­according to President Paula-Mae Weekes.

As T&T observes Emanci­pation Day today, the day marking the abolition of slavery, President Weekes, in her message, noted this country has a high demand for sex and prostitution, leading to the exploitation of Venezuelan women. “It is shameful, given the legacy of African enslavement, that reports of modern-day slavery are rampant in our nation,” Weekes said.

THE SISTER of the woman stabbed to death by her husband, a special reserve police officer, at their Matura home on Thursday, is begging other women to leave abusive relationships at the first sign of trouble as it only gets worse.