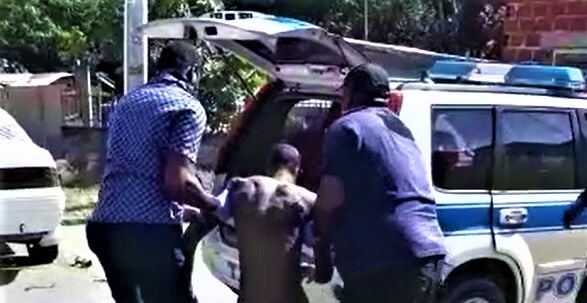 The suspect being taken away by police 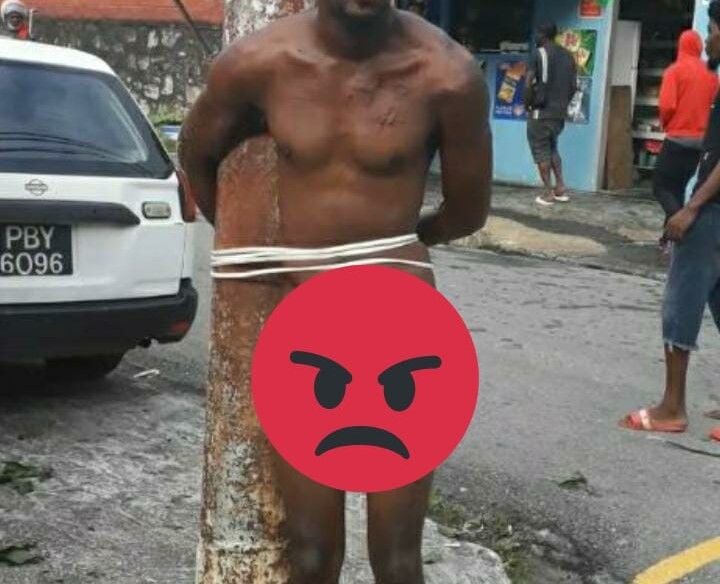 The suspect was tied to a utility pole

RESIDENTS of Carenage caught a suspected pedophile and beat him after he was allegedly tried assaulting an 11-year-old child on Monday.

The suspect was tied to a pole and publicly shamed by residents before police were contacted.

A team of officers from the Inter-Agency Task Force and the Western Division responded to the report and found the man nude, bloodied and bruised, and tied to a utility pole.

Around 8.15 a.m. police received a report from an elderly woman from Carenage that her grand-child was assaulted by a man.

Police were told that residents of Upper Abbe Poujade, an area commonly called 'Scorpian', had beaten the suspect.

Officers Williams and Lewis responded found that the suspect tied to the pole with rope and wire.

A video showed the suspect being untied by the officers, and carried to the trunk of a police vehicle.

Two officers assisted him and he was taken to the St James infirmary.

Police said his injuries were so severe that he was transferred to the Port of Spain General Hospital for further medical treatment.

Upon his discharge he was expected to be taken to the Carenage police station.

Despite reports from Nor­way of a number of elderly people dying after receiving the Covid-19 vaccine, Chief Medical Officer Dr Roshan Parasram says the vaccine is still recommended for the elderly popula­tion as they are the ones most at risk.

Parasram, who was speaking du­ring yesterday’s Covid-19 virtual media briefing, said it is still too early to make any determination regarding the “Norway incident” as investigations are ongoing.

Father and son tied up, executed

JTUM members are calling for a meeting with Government on allegations that workers are being victimised by employers who are citing a fall in economic activity due to the Covid-19 pandemic.

A WARNING was issued to several well-known, “persons of interest,” on Friday night by Police…