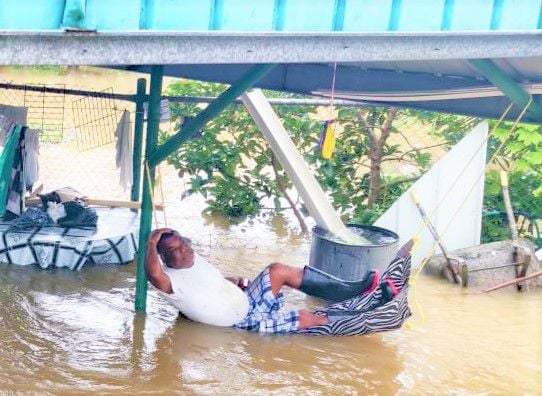 This is the situation at Mathura Avenue, Charlo Village Penal. Photo: Dexter Philip

Minister of Rural Development and Local Government, Kazim Hosein, says his team is on the ground and responding to flood victims throughout the county.

Hosein said the Municipal Emergency Operations Centre of the Ministry has been partially activated following reports of flooding, mainly in south Trinidad.

And he advised citizens to be cautious when traversing areas where the impact of inclement weather, such as flooding and fallen trees.

He said, “We have received several reports of areas where water levels are very high and the DMUs are on site lending assistance where they can. I encourage members of the public to contact their respective Disaster Management Unit through the 24hr Hotline Numbers in the case of flooding or any other problems in their area.”

Hosein asked that citizens keep abreast of warnings and updates from the Trinidad and Tobago Meteorological Service (MET Office), Office of Disaster Preparedness and Management (ODPM) and other reputable sources for timely and accurate information.

There were also reports of flooding in parts of Port of Spain, Mayaro, Diego Martin and Point Fortin following hours of severe rainfall. As a result, all municipal corporations stand ready to assist their burgesses, he said.

Hosein said Heads of Departments, Chief Executive Officers and Council members are in the field and are conducting assessments and providing relief assistance.

He said Disaster Management Units have begun distributing sandbags and providing first response assistance to all affected citizens. Presently, Disaster Management officials are responding to reports of blown-off roofs and assisting to clear fallen trees in an effort to ensure that all routes remain accessible to the public, he said.

Shelter managers have been alerted and shelters will be activated as the need arises.

He said over 600 Community Emergency Response Team (CERT) volunteers, who have been trained by the Ministry since the beginning of 2019, are on standby to assist their communities.

Reports received by the ministry’s DMUs indicate that the following areas experienced street and flash flooding;

11) S.S Erin Road in the vicinity of Batchiya Trace Cemetery

1) In the vicinity of Pleasantville

Cop stabs wife, and her 'intruder'

A police corporal was being questioned by his colleagues following a stabbing incident at his home.

Cleared of coronavirus but student to stay quarantined

A national of Trinidad and Tobago who returned from China last Friday has tested negative for the coronavirus (Covid-19).

No voice to cry, autistic infant found at river's edge

Gyasi Griffith has been found.

The autistic four-year-old had disappeared from the home of his grandmother in Inverness Village, Borde Narve, Princes Town, at 1.30 a.m. on Monday.