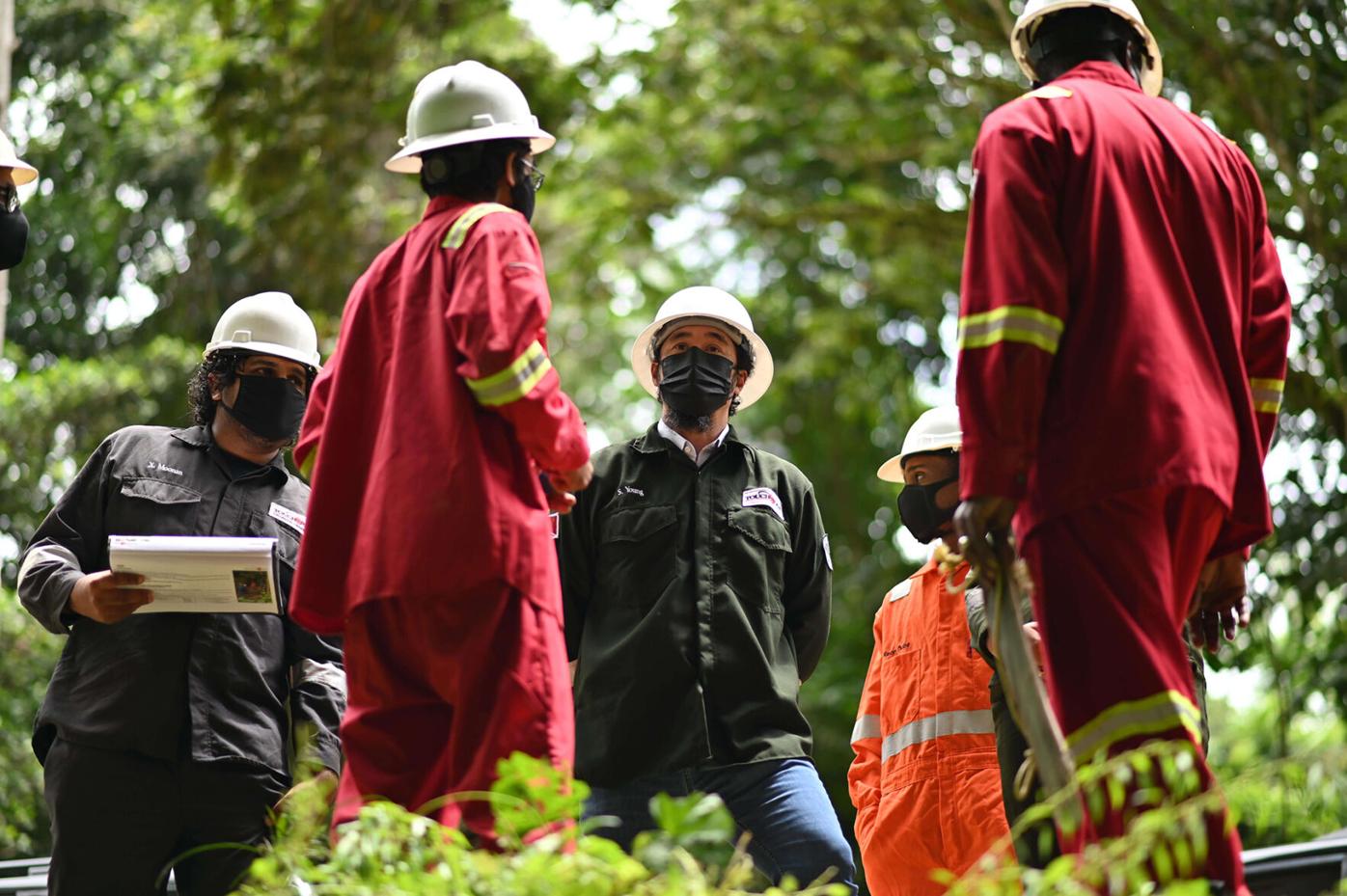 Upstream Management Limited Seismic Party Chief Kapil Ramlal, and Exploration Manager of Touchstone Xavier Moonan discuss the seismic acquisition design and procedure for the detonation of a shot along Line 50, the westernmost line of the Ortoire Block 2D seismic survey. 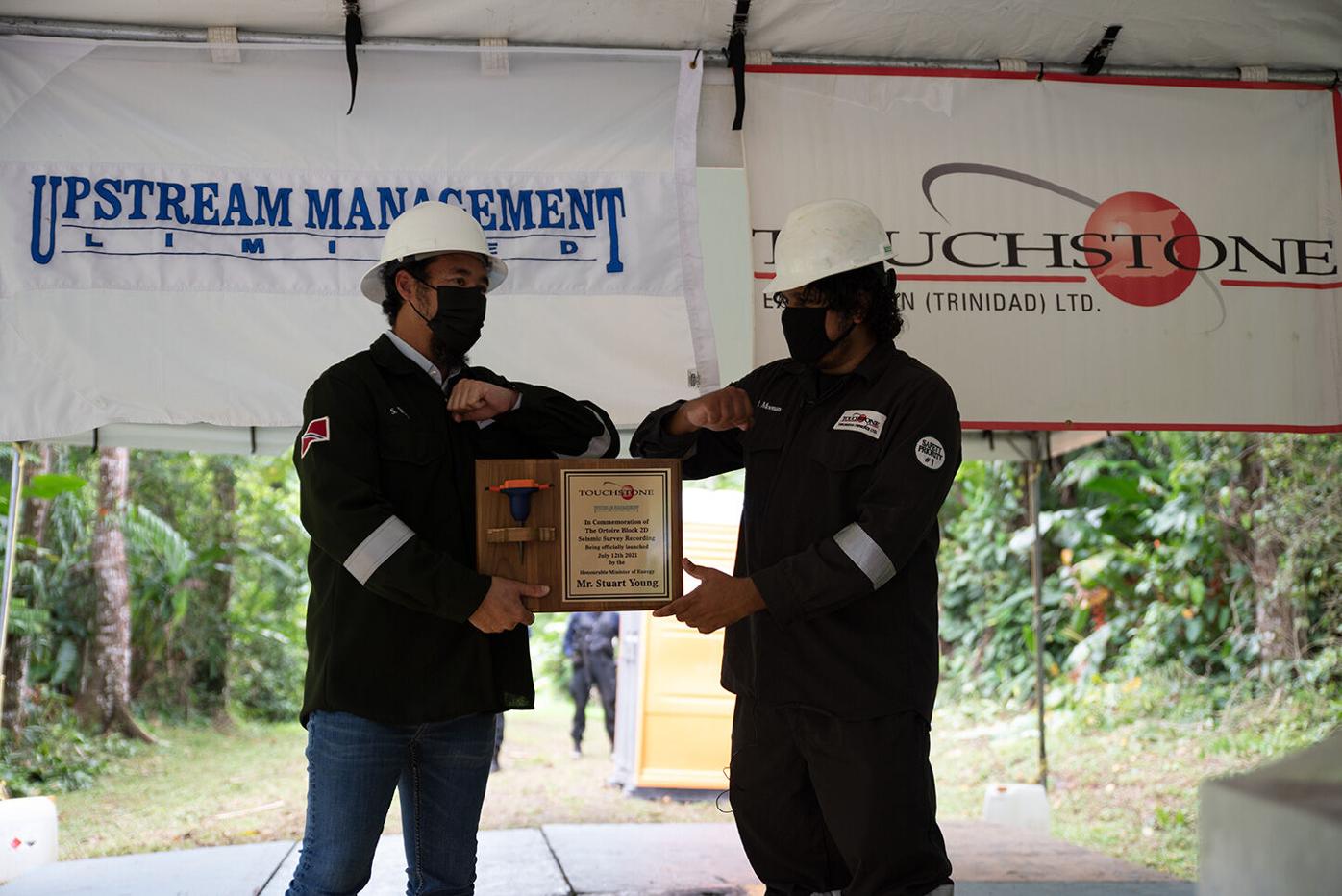 Exploration Manager Xavier Moonan presents a plaque to The Honourable Stuart Young, Minister of Energy commemorating his visit to the Ortoire Block 2D Seismic Survey, the first onshore survey since 2016. The plaque entails a geophone, the fundamental instrument used to detect the seismic waves.

(Fyzabad) – Touchstone Exploration Inc. (“Touchstone” or the "Company") (TSX, LSE: TXP) would like to thank the Honourable Stuart R. Young, Minister of Energy and Energy Industries for sharing his valuable time with Touchstone on July 12, 2021 by attending a field tour with the Company to understand the scope of the Ortoire project first hand.

The Company began its Ortoire Block 2D Seismic Survey which aids the drilling of the soon-to-be spud Royston-1 exploration well and will guide future development wells pending success. The Seismic Survey comprises four northwest to southeast oriented lines totalling approximately 22 kilometres in one of the most remote parts of south eastern Trinidad – the Gajram Forest. The survey is geared towards enhancing the imaging providig a better subsurface understanding of the Royston prospect, its geometry and bounding features.

Speaking at the site of the seismic survey, Minister Young said he spent an educational day touring and was pleased to see the first seismic being performed onshore since 2016, "These are very exciting times with a lot of prospects and a lot of hope for success, especially on the gas side. We at the Ministry of Energy will continue working with Touchstone. The Company is a critical factor in us going forward and providing gas production and showing it can be done."

Minister Young was then taken by Seismic Party Chief Kapil Ramlal to demonstrate a "live" test hole, part of the seismic survey, where the team witnessed the detonation impact. Following which, Minister Young visited the Recording Truck (vicinity of Mora Drip Station Road) to view the seismic data and trigger a seismic shot within the survey line 040. The anticipated Royston-1 well, which is to be spud later this month, bisects this active seismic line.

Xavier Moonan, Touchstone’s Exploration Manager, said, "The Ortoire Block seismic survey is a key minimum work obligation and is expected to be completed by 31st July 2021. This survey will tie into the drilling of Royston-1 exploration well. It will further enhance the understanding of additional exploration prospects identified, for example Steelhead and Kraken, and will guide these drills in phase two of exploration on the Ortoire Block."

Paul Baay, Touchstone’s President and Chief Executive Officer, said “in the last two years the Company has successfully drilled four explorations wells to the Herrera sands in the Ortoire Block, and all were deemed discoveries. These are namely Coho-1, Cascadura-1ST1, Chinook-1 and Cascadura Deep-1. Touchstone has signed a key gas sales agreement with the National Gas Company for the purchase of all gas produced from the Ortoire Block. In the coming months, the Company is anticipating to bring online our first gas discovery – Coho-1 at approximately 10 mmscf/d. In addition, we are working closely with stakeholders to complete the Environmental Impact Assessment for the development of the Cascadura gas discoveries, which the Company anticipates initial production of approximately 100 mmscf/d of liquids rich gas and 2,200 bbls/d of condensate. Touchstone is currently completing our testing at Chinook-1 and expect such gas production to be added via pipeline to the Cascadura facility."

Touchstone and the National Gas Company signed a Framework Agreement to develop plans and foster a strategic partnership with respect to the development, sale and purchase of natural gas and natural gas liquids produced from the Ortoire Block.

PM: An error has been made

Who caused Bliss to raise alarm?

Who was the public official who met with Bliss Seepersad, chairperson of the Police Service …

Man in court for murder of soldier