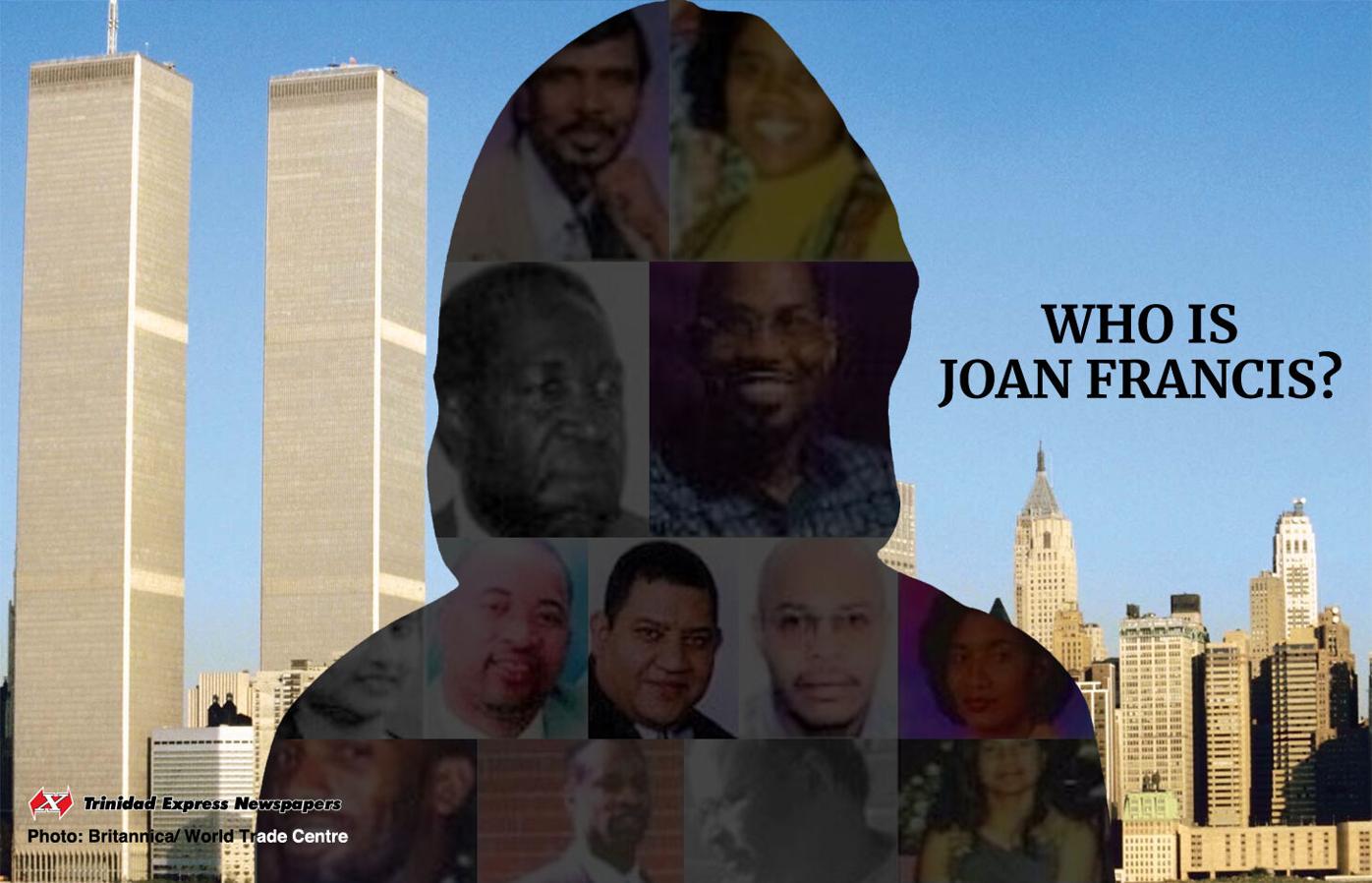 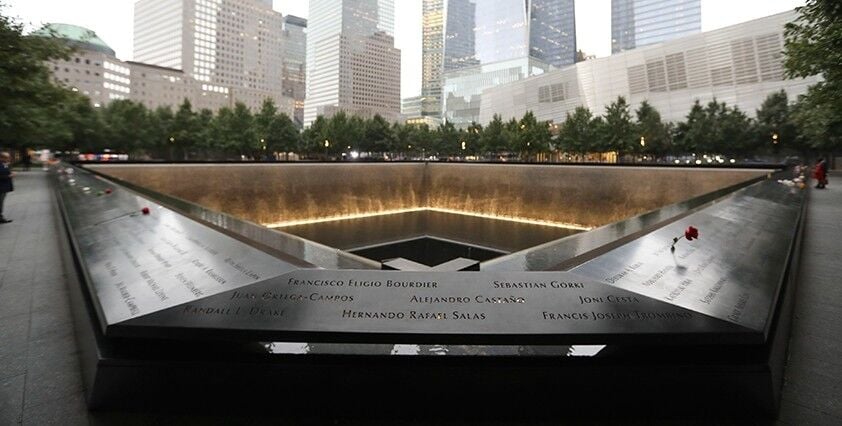 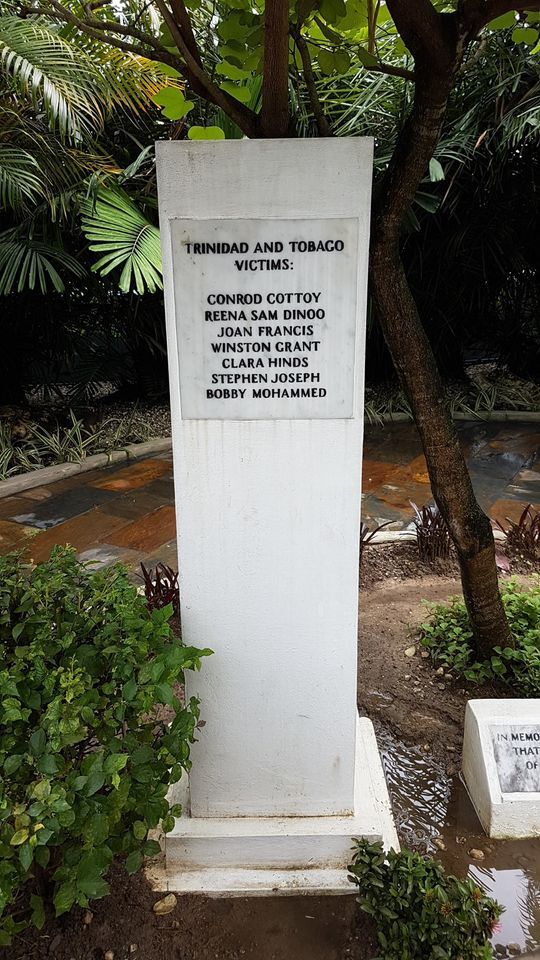 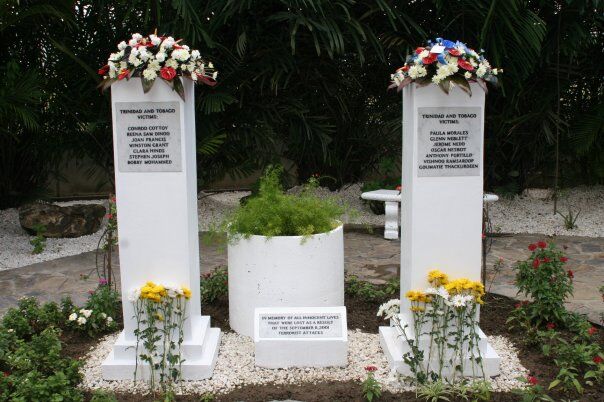 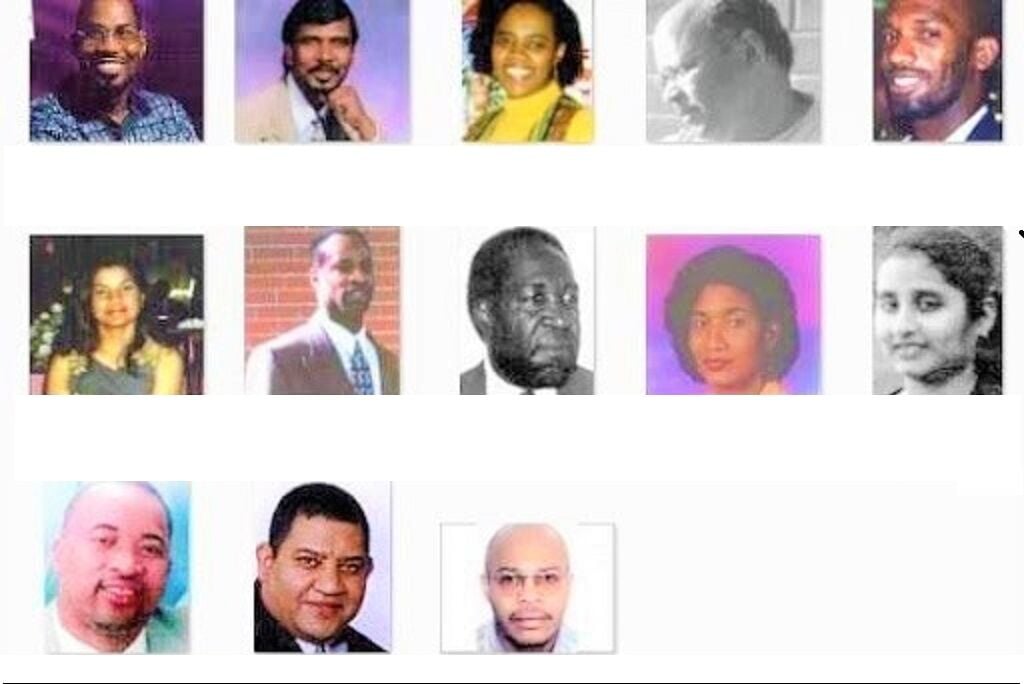 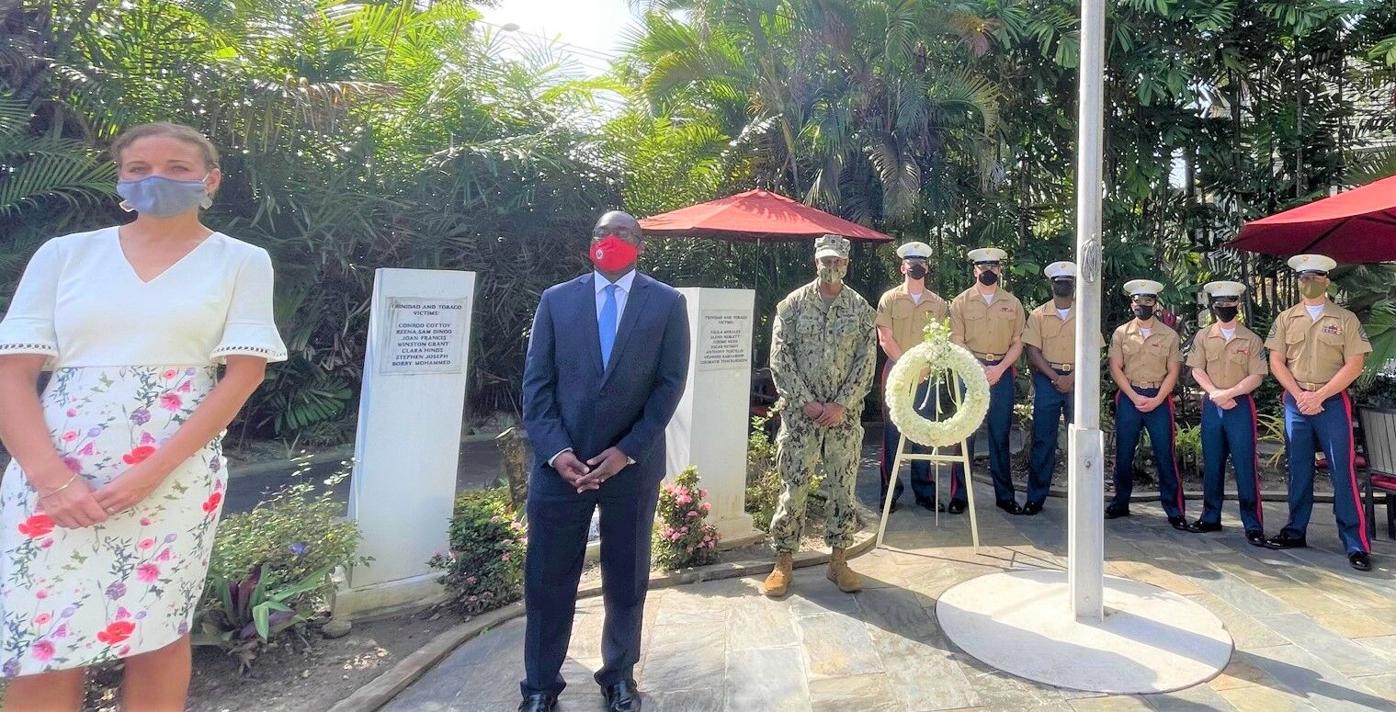 Photo courtesy The US Embassy

Every anniversary since the September 11, 2001 terror attack, New York has hosted the families of those lost that day when hijacked passenger planes crashed into the Pentagon, the World Trade Center skyscrapers, and into a field in Pennsylvania.

At “ground Zero” in Manhattan, the relatives are invited to a service where there are prayers, “never again” speeches, and a reading of the names of each of the almost 3,000 souls lost that day.

Among those names are the nationals of Trinidad and Tobago who followed the American Dream in the 1980s and 1990s and made lives for themselves in the US.

At the US Embassy in Port of Spain yesterday, a moment of silence was observed as Chargé d’Affaires, Shante Moore, held a wreath-laying ceremony at the twin memorials for the T&T migrants who died that day. Except that of the 14 Trinidadians remembered, one may not have died, or even existed.

In the hours following the attack that sunny Tuesday morning on the US east coast, the world turned to television and radio to follow the fires, and watch people jumping and buildings collapsing.

Within days, the names of the T&T nationals began emerging. Not from official sources at first, but from people calling home to tell parents and siblings that a relative who was working in one of the towers that day didn’t come home.

In New York, “Missing” posters covered the walls of buildings around the ruins, as the city took on the unprecedented task of figuring out who had died.

Some bodies were all but vaporised while people who were initially thought lost, were found at hospitals. Some people who were near the towers contacted authorities to report themselves safe.

Death certificates were prepared only for those known to have been on the planes or in the buildings, and those whose families confirmed never returned home.

The Express was also able to chronicle the lives of many of these people.

• Conrod Cottoy, 50, an investment analyst and pastor from Brooklyn who had come home to Trinidad that year for the first time in 14 years, gave his children African names because of his love of the motherland.

• Insurance broker Reena Sam-Dinnoo, studying to become an accountant, who went shopping with her husband Andy the night before she got up, travelled into the city and walked into the building that became her tomb. She was 28.

• Winston Grant, 59, insurance firm employee and father of four, who took care of his wife who suffered with Lou Gehrig’s disease and used a wheelchair, was on the 30th floor of the North Tower, but likely died when it collapsed because, as a friend later said, he stayed behind to help others who were injured, and in wheelchairs.

• Clara Hinds, 52, who met her husband in Trinidad at age 14, and ended up making a life in Queens from her job as a seamstress at Windows of the World in the North Tower, where she was trapped when the plane crashed in the floors beneath her. “Most people say marriage is heaven and hell. For me, it was 31 years of heaven,” husband Hubert would say.

• Stephen Joseph, 39, father and husband, started as a messenger and worked his way to operations officer at a brokerage company, retained his Trinidadian accent and partied like we do at home.

• Glenroy Neblett, born September 15 at the San Fernando General Hospital, died September 11 on the 97th floor of WTC Tower 1 where he worked as an accountant with Marsh and McLennan, a basketball/Patrick Ewing fan, and skilled player, whose ashes came home to Trinidad after fragments of his body were recovered long after that day.

• Jerome Nedd, 39, Windows of the World restaurant chef who went to the US in 1975, and was regarded as a national-class runner at university before he graduated with a degree in the culinary arts and made a life with his wife and son, died doing what he loved, they ­remembered.

• The always impeccably dressed Oscar Nesbitt, 58, who travelled from his brownstone in the Harlem to his job as a tax auditor with New York State, remembered for his faith and the curious discovery made by his family, who reported finding his Bible after his death, page turned to the 16th Psalm, “Preserve me O God, for in thee do I put my trust”.

• Anthony Portillo, 48, an architect who never forgot his roots. A photographer and collector of calypso music dating to the 1930s, he was father of three who took his children on tours of the museums and parks and libraries, reading to them at night. He was loved by his wife who remembered, “I strongly believe that Anthony was an angel that God brought into my life.”

• Vishnoo Ramsaroop, a 45-year-old jani­tor whose secret was revealed ­after his death, having left a wife in Trinidad and started another family in New York. The resulting case between families would be extensively reported and end with both sharing in the Victims Compensation Fund amounting to millions.

• Goumatie Thackurdeen, at 34, already the vice-president of Fiduciary Trust (an investment firm), who travelled the world on business and pleasure, to return to home in Queens and to her mother. She died, some reported, because she wanted to ensure all her employees made it out first. Then the towers collapsed.

• Boyie Mohammed, 50, who left Nelson Street, Port of Spain, Trinidad, and his Ministry of Works job in the late 1970s, ended up at Carr Futures, a firm that lost 69 of its employees that day.

• Paula Morales, 42, originally from Petit Bourg, who died at age 42 on floor 102 of the North Tower where she worked as a computer systems analyst; she was working as a mother of four.

Her name became part of Trinidad and Tobago’s official record soon after the attacks.

It appears in multiple places online.

But all these years later, nothing is known of this person.

There has never been an age, address, occupation or when last she was seen.

There have been efforts by people in the US to find out about Joan Francis, through chat groups, blogs and remembrance sites.

“Whenever I look up your name, Ms Joan Francis. No one has ever claimed you, and strangers leave you mgs..... Heart breaking, I will NEVER forget you, I think about you a lot, although I never met u. You are in my prayers. God bless you Joan Francis” someone named Christina wrote in a memorial for her.

“Joan, you are in the thoughts of my heart. I will not forget you and have your bracelet I wish to give to the Francis family,” said another.

The Express has also spent years searching. We checked the official list produced in the United States that details every single fatality arising out of the September 11 attack. We checked the names of the survivors.

Of the multiple lawsuits filed on behalf of the victims, we searched the documents, since all victims are named as claimants seeking hundreds of millions of dollars in compensation.

At the 9/11 Memorial and Museum in New York, the name of 2,977 victims are inscribed. We checked every last one. Nothing.

As part of the tribute of remembrance at the memorial each year, loved ones read the names of victims. We listened to the recordings. There is a Pauline Francis from Barbados. There is a Virgin Francis from Dominica. There is no Joan Francis.

Last year, the Express provided what it found out to the US Embassy in Port of Spain and asked if it could independently verify the identity of “victim Joan Francis”.

The official response was: “The Embassy’s Public Affairs Section can confirm the names of the T&T nationals who died in the 9/11 attacks were provided to the Embassy by the T&T Consulate in New York.”

The Express also reached out to the Ministry of Foreign and Caricom Affairs this week but no further light could be shed on how this happened.

There are likely only 13 Trinidad-born victims of 9/11.

NOTE: If you have information on “Joan Francis”, send us a message at richard.charan@trinidadexpress.com.