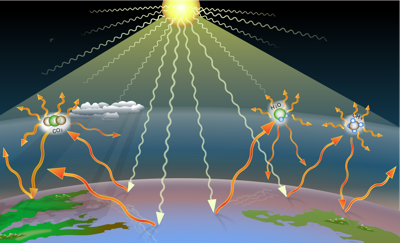 While just a tiny island of 1,981 square miles with a population slightly larger than 1.3m, Trinidad and Tobago produces high levels of greenhouse gas emissions. Our 2018 emissions of 22,900 kt of CO2 (according to the World Bank), for instance, was more than that of countries like Croatia and Panama, with populations of around 4 million and more than Barbados, which produced just 3,790 kt of CO2 in 2018.

As a result of greenhouse gasses trapping heat, the international community has realised that man-made gasses has caused changes to the climate. If nothing is done to curb their continued effect on the environment, it is estimated that our food supply, weather, oceans and land masses will all be negatively affected.

June 1992 saw the creation of the Earth Summit (aka the Rio Summit), which brought together members of over 150 countries in an effort to achieve sustainable development through cooperation. At this summit T&T signed the United Nations Framework Convention on Climate Change, which was drafted with the intent of stabilising the concentration of atmospheric greenhouse gasses at levels that prevent dangerous impact on the Earth’s climate. Our commitment to this framework included such actions as:

In 2015, Trinidad and Tobago followed our participation in the Rio Summit with attendance at and signing of the Paris Agreement. This legally binding international treaty was adopted by 196 countries, with its goal being to strengthen response to climate change and limit global warming to below 2, preferably 1.5 degrees Celsius, compared to pre-industrial levels.

In addition to our involvement in these summits, we are also signatory to the United Nations Convention to Combat Desertification, which stands as the only legally binding international agreement linking environment and development to sustainable land management. Simply put, desertification describes the irreversible transformation of fertile land to infertile land – when land, within a human time-span, becomes no longer able to support the same plant growth it has previously. Drought, overgrazing, fire and deforestation are all major instigators of desertification.

The UNCCD therefore has 2 objectives:

T&T’s participation in the UNCCD include a few obligations to address desertification, including:

According to Julius Smith, Environmental Biologist in the Ministry of Planning and Development, “The national action programme is intended to be a guide across a range of issues. It lists major stakeholders, their roles, the issues involved in sustainable land management and outlines the agreed strategy for sustainable land management as well as land degradation neutrality.”

Basically then, it outlines the strategies to tackle desertification, who should be involved and what they should be doing about the issue.

For updated information on these and other environmental issues and activities in T&T, you can join the MEA Focal Point network by completing the Google Form found on the Environmental Policy and Planning Division TT Instagram and Facebook pages.

Deyalsingh concerned over spike after Savannah protest, but unaware of Angostura motorcade

Patron adjusts his clothing, and accidentally shoots woman at bar

A WOMAN was shot in the leg while at a restaurant and bar on Sunday morning.

With days left before the rematch between the People’s National Movement (PNM) and the Progressive Democratic Patriots (PDP) for control of the Tobago House of Assembly (THA), the PNM enjoys a modest lead of six per cent among residents of Tobago.

No tampering with THA election

Chief Elections Officer Fern Narcis-Scope has assured there will be no tampering or interference with the voting process in tomorrow’s Tobago House of Assembly (THA) election, following the introduction of an initiative to electronically collect data.

Manning in Couva HDU with Covid

Member of Parliament for San Fernando East Brian Manning has been admitted to the high dependency unit of the Couva Hospital and Multi-Training Facility after he contracted the Covid-19 virus.

Ninety-five remand and convicted inmates from six prisons throughout the country have been categorised as “high-threat level” and are being housed at the Wayne Jackson Building, formerly called Building 13, at the Maximum Security Prison (MSP) in Arouca.