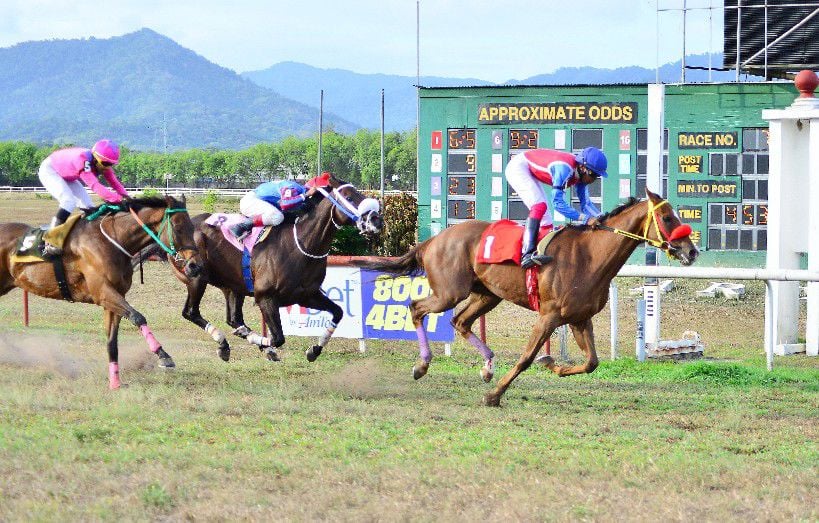 (flashback)BRILLIANT APRIL: Awesome April, front, with Rico Hernandez aboard, pushes out to pop the 1,600-metre Chan Ramlal Limited Champagne Stakes, the seventh race on the Easter Monday card yesterday at Santa Rosa Park, Arima. The Chevan Maharaj-owned filly trained by John O’Brien scored by 1 1/4 lengths from defending champion Stockyard, Root of Jesse, and Battle Cry in a time of 1:36.84. 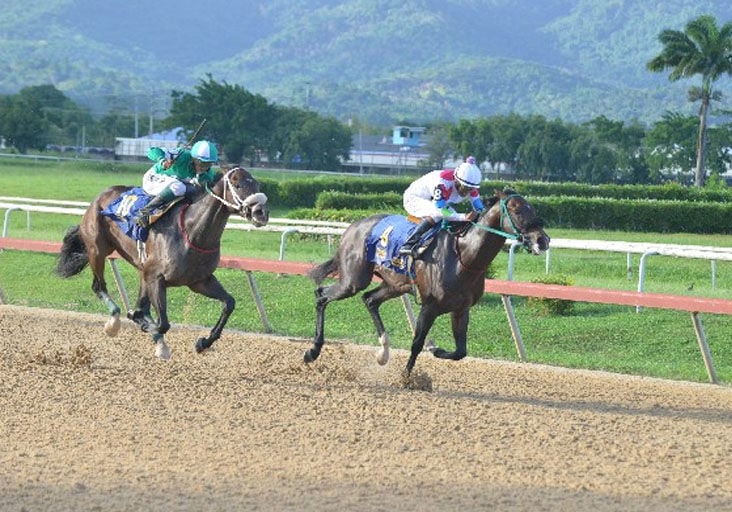 (flashback)BRILLIANT APRIL: Awesome April, front, with Rico Hernandez aboard, pushes out to pop the 1,600-metre Chan Ramlal Limited Champagne Stakes, the seventh race on the Easter Monday card yesterday at Santa Rosa Park, Arima. The Chevan Maharaj-owned filly trained by John O’Brien scored by 1 1/4 lengths from defending champion Stockyard, Root of Jesse, and Battle Cry in a time of 1:36.84.

AWESOME APRIL and Juice Man treated the small crowd to an exciting stretch duel in yesterday’s 1,300-metre Modified Benchmark Handicap for horses rated 90 - 70 feature yesterday at Santa Rosa Park. And at the end of the contest, Awesome April confirmed her booking for this year’s 1,800-metre Sandy Lane Barbados Gold Cup which will be run off at the Garrison Savannah, Bridgetown, Barbados on March 7.

Awesome April, owned by Chevan Maharaj and ridden by Rico Hernandez for trainer John O’Brien, scored by 1 ¼ length from Juice Man, Wots To Report and Risk To Riches in a time of 1:16.53 in the six-horse feature.

It was a battle royal yesterday between the four-year-old USA-bred daughter of Will Take Charge/Lady Zeig, and Jamaica-bred colt Juice Man from the head of the homestretch to the finish line, with neither horse giving way. Juice Man on the rails held a slender lead over Awesome April on his outside. However, Juice Man was canned by the filly as she kept finding more, to inflict this well-regarded colt’s second defeat at Santa Rosa Park from his six career starts. Awesome April, meanwhile, displayed very good battling qualities to improve her record to four wins from five starts.

That success yesterday will be long remembered by two-time champion apprentice Hernandez, as it ended his apprentice career and turned him into a full-fledged rider.

It was also Hernandez’s first win of the season, which took him to the 60 a rider needs to lose his apprentice tag.

This is was the first of trainer Harold Chadee’s two winners on the card. His second was Prince Of Bellevue, generously priced at 2/1 in race three over 1,300 metres. The five-year-old displayed no respect for his younger three-year-old opponent Airforce Won, who was having his first run since winning last year’s St James Stakes.

Prince Of Bellevue ridden by Ricky Jadoo for owner Dave Chadee and trainer, dad Harold, scored by 4 ½ lengths, with American Traveller third and favourite Towering fourth in the six-horse contest.

In the second event on the card, owner/trainer Wayne Lucas’ Single Bullet had a comfortable success over the pace-setting April The Twelveth, with favourite La Reine finishing fifth.

In the fourth race, which was the first of the two turf events, Trusty Rose was given a brilliant ride by Nela Mohammed to win for her new connections. The Dale Kalloo-owned filly was sent to the lead by Mohammed but allowed Redhotfillypepper to dictate the fractions. Trusty Rose looked beaten when Redhotfillypepper kicked away in the homestretch, but Mohammed produced Trusty Rose with a telling run to triumph by 1 ½ lengths from Redhotfillypepper in the 1,500-metre event for horses rated 20 - 0.

In the fifth race, trainer Bennett Nurse, owner Dr Ryan Shim and jockey David Butcher opened their 2020 season with success courtesy of Infortheglory, who held on by a head from Awesome Angel in the 1,500-metre turf contest for horses rated 35 - 0.

In race six, trainer Glenn Mendez’s Signal Note, ridden by Dillon Khelawan for the Errol Stables made most of the running to turn back three-year-old Nuclear Fire by a comfortable five lengths.

And bringing down the curtain on the card was O’Brien’s Blue Navigator owned by Dr Rupert Indar and ridden by Boodramsingh.

Racing action continues on February 8 with the staging of the 1,350-metre Royal Colours Classic for native-bred three-year-olds

Hetmyer, Russell back for T20s

U20 women bid for winning start

Pollard: Execution will be key

Heading into today’s One-Day International series opener against Sri Lanka, West Indies captain Kieron Pollard has said the team will be focused on executing its game plan and improving overall as an outfit.