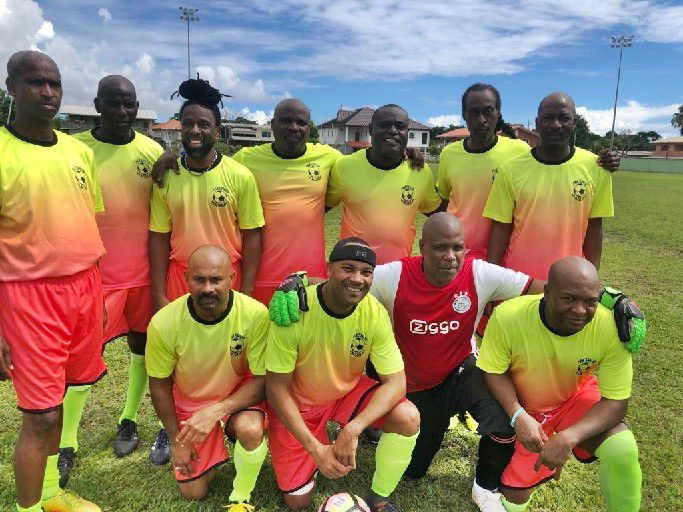 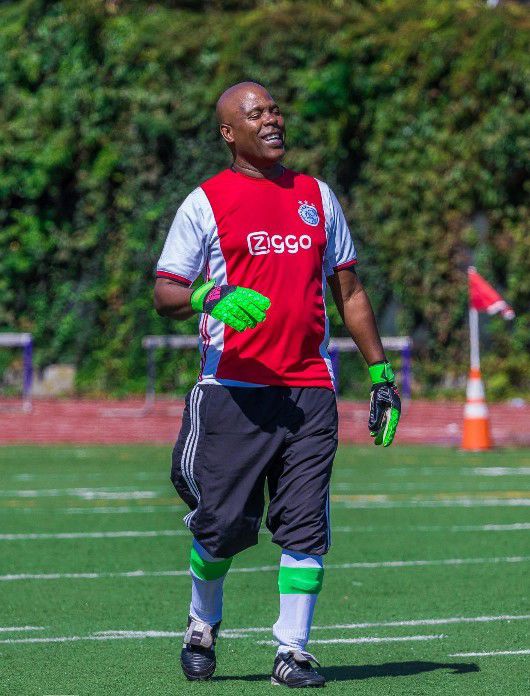 THE Recreation Ground at Haig Street was lit up on Friday, commemorating the passing of a Carenage legend.

Andrew “Sleepy” Ali died on Thursday in New York City, a victim of the dreaded Covid-19 pandemic that has infected over millions and so far killed close to 160,000 persons world wide.

Ali was the national youth team goalkeeper at the 1984 Concacaf Under-19 Championsip, held in Trinidad and Tobago. He played with Clint Marcelle and Russell Sutton, among others.

The talented home team advanced to the second round, where they drew with Costa Rica (0-0) and El Salvador (1-1), but went out due to a 1-0 defeat to the United States.

In the mid-1980s Ali competed with former national goalkeeper and coach Ross Russell for the goalkeeper position at Mucurapo and then went on to play for San Fernando Technical, the then powerhouse of schoolboy football, along with Russell Latapy. He then left on scholarship for the United States as an 18-year-old and subsequently migrated, but kept his ties strong with the Carenage community where he grew up.

“He had a house in Trinidad and made multiple trips back and forth over the years,” his New York-based daughter Ayisha recalled.

Married to childhood sweetheart Pauline for 35 years, Ali had two daughters Ayisha and Aliyaha, along with son Amandre. He also had two sisters, Monica and Lisa Ali, and two brothers named Anthony Ali. The first was known as Anthony “Coolie Boy” Ali and the other, simply Anthony Ali.

Ali had no health issues prior to dying from pneumonia, a complication from Covid-19. With Covid-19 restrictions heavily enforced in New York, his family saw him only once via social media before he died. His death has devastated the family.

“It happened quickly,” his daughter said.

Despite his years in the USA, Ali always thought of T&T as home.

“It was his dream to buy his own house in Trinidad,” Ayisha said. “He bought properties and dealt with Real Restate in Westmoorings,” she added. “He was extremely big on God and family. A very giving person to friends and family in America, England and Trinidad. He used to give a lot of stuff to people in Carenage and in San Fernando. He used to buy uniforms and footballs for the Carenage football team.”

Ali maintained his roots with Carenage and was regularly home to play old boys football. Everyday, he also spoke with Terry St Louis, who he considered as his brother.

A working man, Ali kept fit playing old boys football with “Legends FC” in New York and returned to Trinidad and Tobago yearly to play old boys football in Carenage and even toured Tobago last year. Because of his love for Carenage, his family hopes to have Ali buried in Trinidad on his December 16th birthday, fulfilling his wish to be buried in his homeland.

‘Sleepy’ name is written on

the community hall of fame

Ali, whose name is written on the community hall of fame on the wall at the Carenage Ground, earned the nickname “Sleepy” while in school, because he slept a lot, having put all his energy into football. He was also called “Timewell”, meaning only time will tell how he would turn out, because of his rough upbringing in the sometimes violent Abbe Poujade Street neighbourhood.

Ross Russell remembers “Sleepy” as his partner and also for the competition, Ali was a year older and they both passed through Mucurapo at Under-14, Under-16 and senior levels.

“When he came in a room there would be fun,” Russell recalled. “People would be attracted to him, but he was also always a positive guy.”

“He was a little better than me because he was a little older and a little more seasoned,” stated Russell, one of the outstanding goalkeepers Trinidad and Tobago has produced. Russell, Ali and former T&T national Russell Sutton were on the Mucurapo Junior Secondary team which won the National Under-14 title under fireman and head coach, Ronald Alexis.

“The first year he start, we won the North Zone but we lost the National InterCol. The next year I played because he had some family problems in the States. When he came back, I was number one and I never gave him a chance. He can’t tell his story,” Russell joked.

Both went on to represent T&T at youth level, Ali on the ’84 national U-19 team and Russell on the Under-17 team the previous year along with Latapy, Marcelle, Colin Rocke, Todd Willis and Marvin Faustin.

“We were buddies,” Russell recalled. “We had competition, but fun competition.”

Angus Eve – still the player with the most international caps for Trinidad and Tobago at senior level – recalls Ali as one of the idols he looked up to while growing up in Carenage.

“Andrew Ali was one of the people I grew up looking at because he played for Carenage Boys and went to Mucurapo Senior Comprehensive,” Eve said, “So I basically came up looking at these guys and seeing him play in that National Under 20 youth tournament.

“I think basically that whole team went to San Fernando Tech under coach Muhammed Isa and then he went on to scholarship in America. So, as a young boy in Carenage, I who was four years behind them, looked up to those guys and wanted to emulate what they were doing.”

Eve also saw the humanitarian side of Ali, during his regular trips to Trinidad.

“In Carenage, they lit up the football field for him,” said Eve, who saw Ali as an “all-round good guy”.

“When he come back we would have the old boys game in Carenage, foreigners against the locals. We had a youth academy and he would sent back equipment and uniforms and stuff. Andrew is very fondly thought about in the area. He tried to contribute and was also someone you could reach out and talk to.”

Truly a life worth remembering.

Over the years, the Trinidad and Tobago Cricket Board (TTCB) has placed a lot of emphasis on…

Antoine shines at ‘Pan Am Prep’