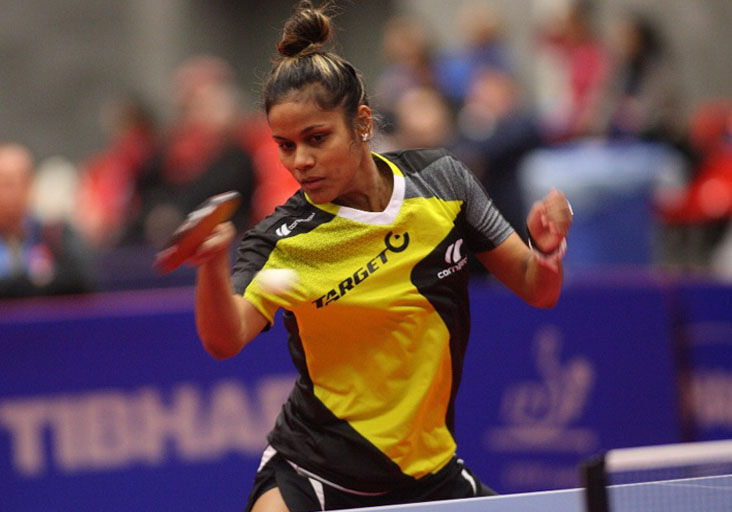 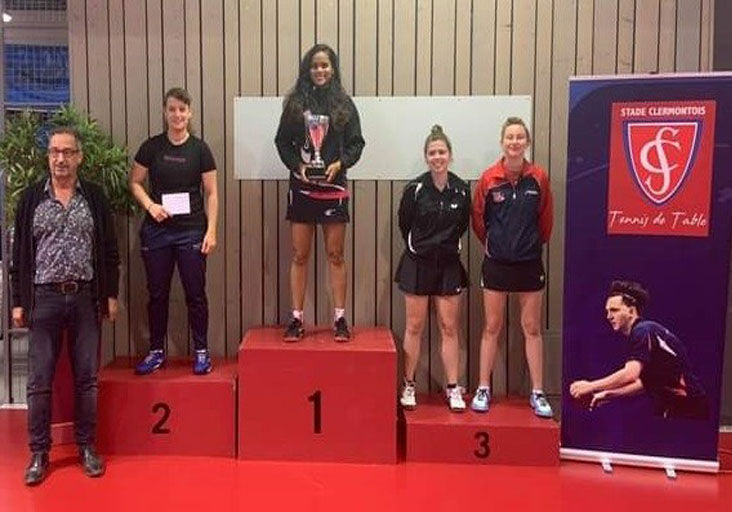 GOLDEN AGAIN: France-based pro Rheann Chung is all smiles at the top of the podium after receiving her Open des Volcans—Tournoi National B women’s singles trophy, in Clermont-Ferrand, France, two Sundays ago.

GOLDEN AGAIN: France-based pro Rheann Chung is all smiles at the top of the podium after receiving her Open des Volcans—Tournoi National B women’s singles trophy, in Clermont-Ferrand, France, two Sundays ago.

Rheann Chung is back at the top of the podium. The Trinidad and Tobago table tennis star struck gold in the women’s singles event at the Open des Volcans—Tournoi National B, in Clermont-Ferrand, France, two Sundays ago.

“I am starting to get back into my routine and the competition mode bit by bit,” Chung told the Express, following her victory. “It felt a little strange but cool because I have not competed a lot during the pandemic and I have not been on a podium since January 2020 when I won the Criterium Federal tournament.”

Chung also competed in an event for players with 1,999 rating points or fewer. The France-based professional fared well, beating four men to advance all the way to the semis.

“I would have liked to have won,” said Chung. “I was the only female so it would have been fun to disappoint some men players. I was satisfied with how I handled the women’s singles category, especially since Clermont-Ferrand is an average of 358 metres altitude.”

“I was not satisfied the Saturday in the mixed category because I would have liked to go a little further in the tournament. But the Sunday was much better. I was getting a better sensation, control of the ball, and I was more comfortable on the table.”

On Wednesday, Chung leaves for the ITTF Pan American Championships in Lima, Peru. She goes into action on Saturday in the opening round of the women’s singles.

“I’ll do my best. I played in Peru before at the Pan Am Games 2019. I am going to fight hard, take it match by match, and go as far as possible.”

Chung said she is very grateful for the financial support she received for the Pan Am Champs outing.

“Firstly, I reached out to First Citizens bank for assistance, and they kindly granted my airfare from France to Peru. I wish to sincerely thank them for their kind gesture.

“I also messaged Minister Shamfa Cudjoe concerning my accommodation,” the 2001 First Citizens Sports Foundation Sportswoman of the Year continued. “She was very receptive. She understood the urgency of my request and guided me to her adviser, Mr Ephraim Serrette who was also very cordial and effective. He transferred my application to the Sport and Culture Fund Secretariat.”

Chung’s application to the Sport and Culture Fund was successful.

“Everything was done smoothly and sharp. I was pretty surprised by the quickness of the process. I also wish to thank the board and the secretariat for their approval and efficiency.

“Other than Anil Roberts, who had previously assisted Dexter (St Louis) and myself in the past, I have not known any sports minister who responds to athletes so quickly.”

St Louis, who passed away in 2019, was Chung’s stepfather and mentor. His death was a huge blow for Chung. She has battled on, though, and is keen for continued success in the sport.

“I would like to compete more especially at the WTT (World Table Tennis) tours to improve my game and world ranking. I am a warrior with lots of passion to play and compete. Like my dad, Dexter taught me, it is very important to take care of myself, and stay fit and healthy,” Chung ended, “to maintain a certain standard of play.”

Morris: Harford made us feel at home

A beautiful Friday afternoon in Galle, and while the Sri Lankans are celebrating the West Indies are again contemplating a disappointing campaign.

That 2-0 series triumph in Bangladesh seems more than 11 months ago now. It’s not just losing by over 150 runs in both Tests which rankles, it’s the repetitive capitulations which drain the spirit.

Alexis vs Trestrail in Anglez semis