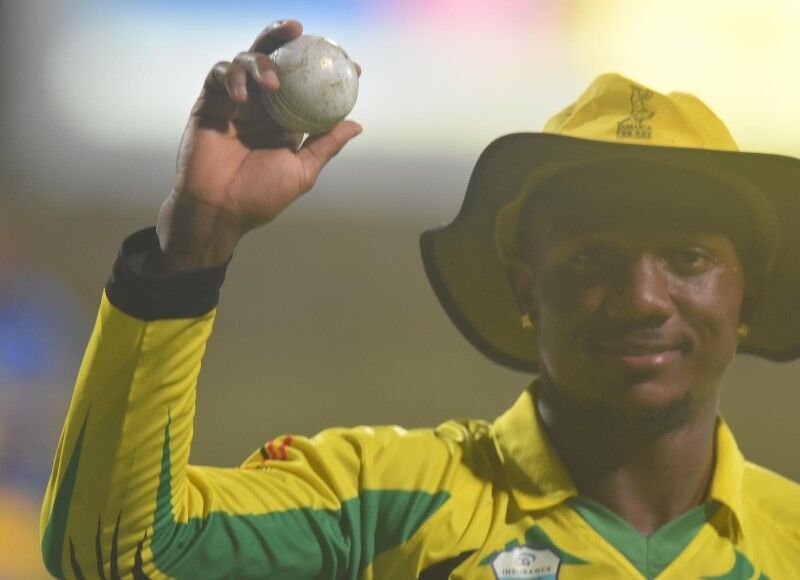 HAT-TRICK MAN: Andre McCarthy with the match ball after bowling his team to a 51-run victory over the Barbados Pride. 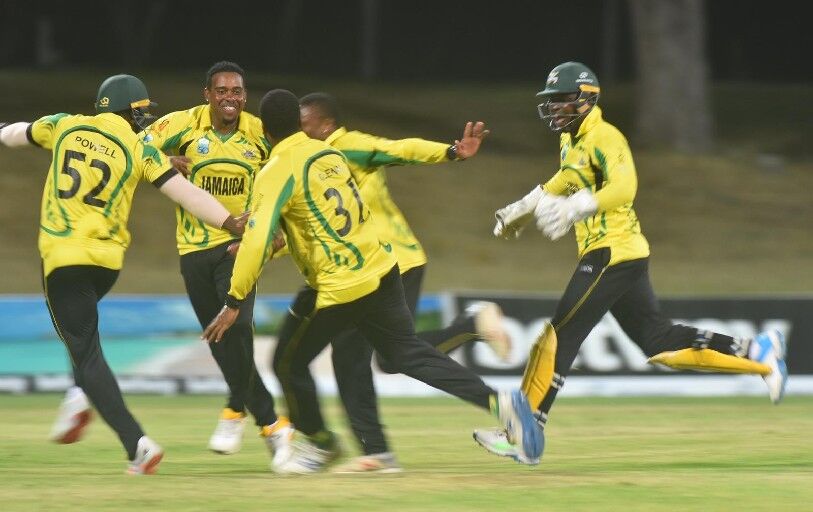 HAT-TRICK MAN: Andre McCarthy with the match ball after bowling his team to a 51-run victory over the Barbados Pride.

A sensational hat-trick by part-time off-spinner Andre McCarthy floored the Barbados Pride, as Jamaica Scorpions surged into the semi-finals of the Super50 Cup Sunday night with an emphatic 51-run victory.

Chasing a below par 219 for victory at the Coolidge Cricket Ground in the decisive preliminary round match to determine the last semi-final spot, the Pride were ripped apart by McCarthy’s career-best six for 19, to crumble to an embarrassing 167 all out in the 42nd over.

They appeared to be storming to victory on 141 for two in the 29th over behind Shai Hope’s top score of 51 and opener Justin Greaves’s 36 but once McCarthy sliced through the innings, Pride shockingly lost their last eight wickets for just 26 runs.

With the scales slowly tipping in the Scorpions’s favour, McCarthy rammed home the advantage for his side by turning the game on its head in the 40th over.

Starting his eighth over with Pride perched on 165 for six, McCarthy kept Ashley Nurse (two) scoreless off the first two balls before having the right-hander caught at the wicket cutting, and then followed up by comprehensively bowling Akeem Jordan on the back foot.

Joshua Bishop, who had earlier snared a brilliant career-best five-wicket haul, then played down the wrong line to the hat-trick ball and had his off-stump pegged back, sparking celebrations among the Scorpions camp.

McCarthy fittingly picked up the last wicket in his tenth over when he breached Chemar Holder’s uncertain defensive prod to bowl him for two, and earn Scorpions a clash with Trinidad and Tobago Red Force in Wednesday’s first semi-final.

“From ever since I went out there and I never made any runs I knew I had to contribute with something in the game and I told the skipper ‘give me the ball and I am going to do the job for you today’,” a hoarse McCarthy said afterwards.

“I’ve been working on my bowling. I was in Bangladesh with the [West Indies] team and I was doing a lot of bowling. The coach really recognised my bowling and it’s something that is working for me now.”

McCarthy’s heroics nearly overshadowed a courageous unbeaten 68 from number 10 Odean Smith who inspired two successive half-century stands at the back end to pull Scorpions out of the mire at 87 for eight and propel them to 218 all out in the 46th over, after they chose to bat.

Better known for his fast bowling, Smith resisted stoutly with five fours and four sixes in a 75-ball knock as he added 80 for the ninth wicket with Jamie Merchant who made a breezy 37 off 34 balls with four fours and a six.

Smith then found an ally in Jeavor Royal (16), the pair putting on a further 51 for the last wicket to see Scorpions past the 200-run mark.

Handed the new ball, the 20-year-old Bishop snatched the first five wickets to fall to end with five for 35 while off-spinner Nurse supported with two for 51, as none of the Scorpions specialist batsmen suggested permanence.

All-rounder Fabian Allen chipped in with 23 in a 29-run, sixth wicket stand with captain Rovman Powell (19) before holing out to long on off Nurse in the 24th over.

Despite their momentum, Scorpions found themselves on the ropes again as Hope, in only his second match of the tournament, put on 52 for the first wicket with Greaves before adding a further 66 for the second with Shamarh Brooks who made 27.

Greaves struck five fours and a six in a robust 26-ball knock before miscuing a drive at off-spinner Merchant and being taken at point in the 10th over, and Brooks was run out in the 22nd over in a mix-up over a single with Hope who faced 81 balls and counted three fours and a six.

Even then, there was no sign of the pending drama, as Hope and left-hander Jonathan Carter (26) confidently added 23 for the third wicket.

But Allen (two for 41) accounted for both with his left-arm spin, Hope slicing a catch to Brandon King diving forward at point in the 29th over and Carter driving a sharp return catch in the 33rd.

Six balls later in the next over with one run added, captain Jason Holder missed a pull and perished lbw for one to give McCarthy his first wicket in his sixth over and when left-hander Nicholas Kirton (three) clipped a straightforward catch to substitute Sheldon Cottrell at short midwicket in McCarthy’s next over, Pride were slumping 163 for six in the 38th over.

Two overs later, the 33-year-old McCarthy struck the killer blow with his hat-trick to end the game as a contest.

“Everything is geared towards the World Cup which is far away but winning is a habit. We just need to find a way to start to win cricket matches.”

HAYDEN MITCHELL was appointed president of the Tennis Association of Trinidad and Tobago for the third consecutive time on Sunday, at National Cycling Centre, Couva.

The bottom-of-the-table team stunned joint second-placed Solo Crusaders 3-2 at D’Abadie Community Centre for only their second win from eight outings in the competition.

The Red Force defeated the Guyana Jaguars by 152 runs in the final, having posted 362 after being sent in to bat.

So the not-so-Super50 is over. But at least the best team won.

The Red Force lived up to their favourites tag impressively, one has to say. Playing unbeaten through a tournament is no mean feat, especially at a period in West Indies cricket where inconsistency is the norm.

The Trinidad and Tobago Football Association (TTFA) wishes to advise that former men’s national footballer and member of the historic 2006 World Cup squad, Brent Sancho, has been selected as a successful candidate by world football’s governing body for the inaugural FIFA Diploma in Club management.