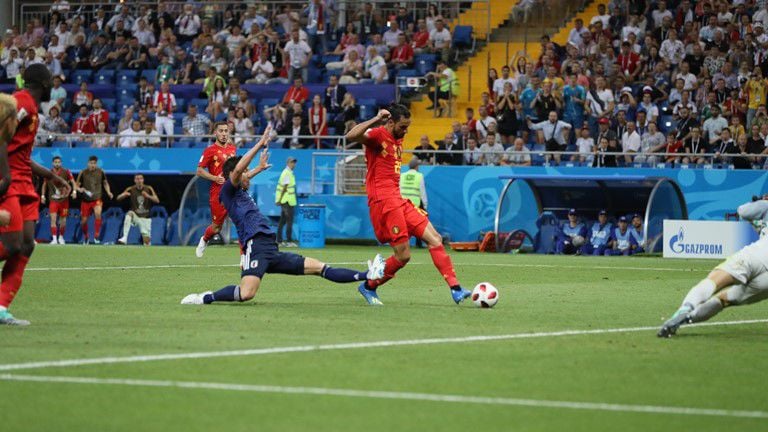 Belgium's Nacer Chadli prepares to shoot past Eiji Kawashima what turned out to be the winning goal in his side 3-2 win against Japan in their Round of 16 clash in Rostov, Russia, on Monday. 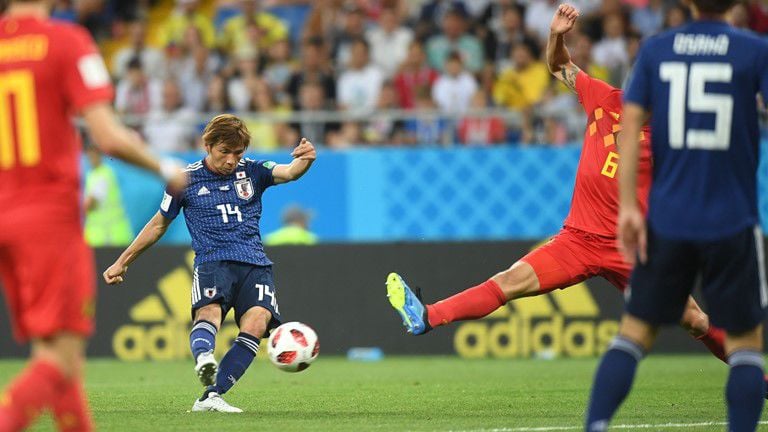 Midfielder Takashi Inui spanks the ball from distance to score Japan's second goal in their 3-2 loss to Belgium.

Belgium's Nacer Chadli prepares to shoot past Eiji Kawashima what turned out to be the winning goal in his side 3-2 win against Japan in their Round of 16 clash in Rostov, Russia, on Monday.

Midfielder Takashi Inui spanks the ball from distance to score Japan's second goal in their 3-2 loss to Belgium.

Belgium needed a goal from Nacer Chadli in the final seconds of time added on to see off a gritty Japan 3-2 in their Round of 16 clash at the Rostov Arena on Monday.

The European outfit were heavy favourites to see off their Asian opponents, and after creating several good chances in the first half, it appeared it was just a matter of time before they find the back of the net.

However, Belgium probably caused many a fans hearts to flutter when they went behind in the 48th minute. Gaku Shibasaki played a through ball that not only did Jan Vertonghen failed to cut out but also failed to put in a challenge, leaving Genki Haraguchi free to slot past Thibaut Courtois. Advantage Japan.

Eden Hazard should have even the score almost immediately, but his volley from inside the box crashed onto the right post.

And the situation took a turn for the worse when Takashi Inui collected a pass in the middle of Belgium's half and rifled a shot from distance that settled inside the right post to make it 2-0.

But the Belgians did not drop their heads, as Romelu Lukaku come close on two occasions within six minutes. He headed just wide of the left post off a Thomas Meunier cross, and then placed another header over the bar.

Vertonghen started the comeback in the 69th minute by making amends for his earlier lapse. A sliced clearance came his way on the left of goal and he placed a looping angled header beyond the reach of Eiji Kawashima and into the top left corner

Five minutes later (74th), it was substitute Marouane Fellani rising above two defenders to meet an Eden Hazard cross with a powerful header that Kawashima could not nothing about.

Japan won a penalty in the third minute of added on time and they threw everyone forward looking for that winning goal. However, it was a move that backfired. With Courtois snapping up the corner he quickly threw an outlet pass that allowed belgium to break quickly going forward. And Meunier would slide the ball from on the right to Lukaku, who having picked up the run of Chadli on the left, deftly deflected the pass in his direction for him to fire home.

The goal came with literally the last play of the match and the Japanese could not believe what had just happened, as it sent them out of the tournament in the most cruel of ways.

Belgium will now meet Brazil in the quarter-finals after the South American champions turned back Mexico 2-0 earlier.